SEAN: School’s back in session. Do you have all your manga supplies? The old favorites? The new series? The zipatone? Let’s see what you might want to pick up.

Dark Horse still knows we like our samurai manga with the 6th New Lone Wolf & Cub.

ASH: I’m still catching up with the old school Lone Wolf & Cub, but I’m picking up this series, too. 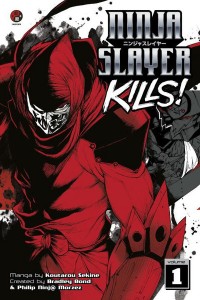 SEAN: Kodansha debuts a new series called Ninja Slayer Kills, based off of a concept by two Americans who I suspect are imaginary. It also has a novel series later this year from Vertical, and seems to be very much in the ‘flashy action sequences’ genre.

ASH: Actually, I think Vertical has one of the other manga adaptations. But, yes, lots of action.

SEAN: Kodansha also has the fourth volume of Yamada-kun and the Seven Witches. We’re still running a few witches short.

ASH: This series has been a lot of fun so far.

SEAN: Slightly creepy power imbalance aside, I really enjoyed the first volume of The Ancient Magus’ Bride from Seven Seas, so the 2nd volume coming out pleases me greatly.

ANNA: I enjoyed the first one too. I like these low-key fantasy series, they remind me of the type of thing CMX used to put out (RIP).

ASH: The first volume was one of my favorite debuts this year, so I’m definitely looking forward to the second!

MELINDA: I will have to catch up with this one for sure!

SEAN: And a 6th omnibus of Dance in the Vampire Bund, which combines lolis and vampires to devastating effect, or so I hear.

Kimi ni Todoke has a 22nd volume, and I really hope that a plot point suggested by the cliffhanger happens, for the sake of my own sanity.

MICHELLE: Volume 21 was great, if painful, so I am very much looking forward to another installment.

ANNA: I have around 3 volumes now I need to read to catch up. I think I was staying away from the emotional trauma. I do love this series.

MELINDA: I live for this kind of pain.

SEAN: Kiss of the Rose Princess 6… I admit I’ve lost track of this series. Anna?

ANNA: What’s going to happen with the Junk Rose Princess and her Four Fake Rose Knights? Now that some of Anise’s Rose Knights are powered up even more, will this throw off the dynamics in this fun and frothy reverse harem manga? Is Anise’s father really as evil as he seems? How does one engineer Rose people? How many cards can Anise collect? I don’t know but I want to find out!!!!!

SEAN: Komomo Confiserie is the new series from Maki Minami, author of Special A and Voice Over. Given that title, I’d expect food to be involved. Always love stuff from this author.

MICHELLE: I loved Voice Over! way more an I expected to, and am looking forward to Komomo Confiserie quite a lot!

ANNA: I liked Voice Over, but not enough to complete the series. On the other hand I love food manga so I will be checking this out.

SEAN: Nisekoi barrels along with an 11th volume, being the rare Jump romantic comedy that doesn’t die in North America (see Strawberry 100% for the fate of prior comedies of that sort). 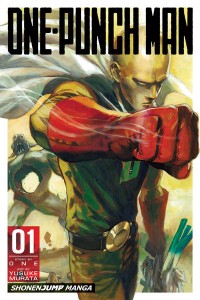 After getting a few volumes out digital-only, print readers are now able to experience the gloriousness that is One-Punch Man, with its first two volumes coming out together.

ANNA: One-Punch Man is the best. It totally deserves the print edition and I hope more readers discover it because it is hilarious.

ASH: I’ve been holding out for the print edition; can’t wait to finally read it!

SEAN: Seraph of the End gets a 6th volume. Vampires? Still? Dunno.

ANNA: Not surprisingly, I enjoy this a bunch. It has more world building than most vampire manga. Looking forward to this volume.

MICHELLE: You are right; if you include Jewelry Box, Boys Over Flowers has 37 volumes. Also, yay Skip Beat!.

Lastly, you thought there would be no Yu-Gi-Oh? Foolish mortal! Here’s Vol. 7 of Zexal.

What manga makes you want to learn logarithm tables? (None of them, I imagine, unless you have the old Math Girls manga volume.)

ASH: I in fact DO have the old Math Girls volume!