SEAN: Since next week is a light week (despite being July 1st, it doesn’t count as a first week of July), I thought I’d do the manga in reverse order. And hey, coincidentally, that makes the image line up properly, too! Funny, that.

So we start with Vertical, who have the 5th volume of fanservice and ladies being awesome fantasy Witchcraft Works.

ASH: I’m a bit behind in this series, but I did enjoy the first few volumes.

SEAN: Seven Seas finally have a 7th volume of Toradora! for us (blame Japan, the series comes out very slowly over there), which resolves the horrible cliffhanger from… February 2014. Ah, the joys of monthly series that are caught up. I’ve reviewed it here. 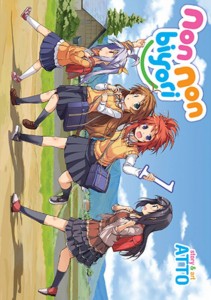 The Seven Seas debut this week is Non Non Biyori, a sweet city-girl meets countryside story that I’ve heard described as Higurashi without all the murder and conspiracy, and seemingly light on fanservice. I’m looking forward to this a great deal.

ASH: I know quite a few people looking forward to this manga.

ANNA: I don’t know. I will wait and see what the early reviewers say about this one.

SEAN: And there can’t be a month going by without an Alice in the Country of Hearts, this one a short story collection called Junk Box.

ANNA: I really liked the first Alice series and have just resigned myself to the fact that the spin-offs are not going to be as good as the main series.

SEAN: Attack on Titan is such a big seller for Kodansha that even the non-fiction books are getting licensed (almost unheard of after a few character guides bombed over here). This one is The Science of Attack on Titan. The author apparently specializes in looking at fantasy worlds and figuring out how they would work. Also, vampi—I mean, Titans!

ASH: Attack on Titan is the only series that has been able to convince Kodansha to break its “manga only” rule.

SEAN: And we have the third and final volume of Maria the Virgin Witch. There’s a one-shot collection of side stories in Japan, but I’m not sure Kodansha has picked that up.

ASH: Kodansha has! Exhibition is currently scheduled to be released in August.

SEAN: Finally, there’s the 9th Lone Wolf & Cub omnibus from Dark Horse, who curse the fact that I’m not starting with them as always.

Did reversing this make something stand out more for you?

MICHELLE: Alas, no. Just one thing to anticipate your review of!

ASH: Reversing the order made me realize that there was an actual order…

ANNA: I’m happy that this week is so light, because maybe I can catch up on my stacks and stacks of unread manga.

MELINDA: I can do nothing but be miffed on Lone Wolf and Cub’s behalf.