SEAN: The end of the month always brings a deluge from Yen, and if you add on the other publishers doing stuff it can get rather expensive. Let’s see what might be worth your hard-earned cash.

Ze, from 801 Media, has finally hit Volume 10, despite a particularly irregular release schedule.

ASH: I just recently caught up with Ze and am ready for more, even if some of the characters are jerks.

MICHELLE: I read the first few volumes of Ze and then drifted away when there was a lull between volumes. I seem to recall some plot I wasn’t wild about, also, but the details escape me now.

MELINDA: I *do* remember pretty clearly why I drifted away from Ze, but I’m fairly impressed that it has gone on this long. Long BL series seem so rare. 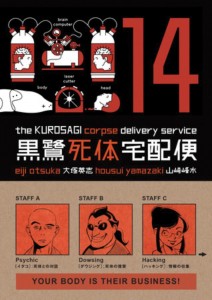 SEAN: If it seems like it’s been forever since the last Kurosagi Corpse Delivery Service, that’s because it has been – Vol. 13 was out in December 2012. But things are looking up, as not only do we get Vol. 14 next week, but there’s an omnibus re-release in the fall.

ASH: They may not come out very frequently, but I’m always glad to see another volume of this series.

SEAN: Let’s Dance a Waltz hit all the right buttons except one – but it was a big wrong button. Now that our heroine has magically lost weight and become cute through the power of dance, can Vol. 2 hold on to an audience that all groaned when that happened?

MICHELLE: I am avoiding this one just on general principle. It makes me really wish The Stellar Six of Gingacho could’ve continued, because I ended up buying the final volume in Japanese and let’s just say this particular trope is avoided quite satisfactorily.

ANNA: The Stellar Six of Gingacho was really good!

SEAN: Noragami is a series that just didn’t catch on with me, but others from the Manga Bookshelf team can tell you about its 5th volume.

Your Lie in April’s first volume didn’t completely wow me, but had a lot of promise. Vol. 2 should build on that.

MICHELLE: As a pianist, I should want to read this but somehow I feel kind of “meh” about it.

SEAN: Seven Seas debuts a new manwha with an omnibus of Freezing 1 and 2. This has been highly anticipated by many readers, despite not having any monster girls that I know of. The blurb calls it “Ultra violent and sexy”, so the usual Seven Seas warnings apply.

No monster girls is not a problem with the 2nd volume of goofy comedy Nurse Hitomi’s Monster Infirmary.

Vertical has the 10th volume of mechstravaganza Mobile Suit Gundam: The Origin. (I give permission for Vertical to use ‘mechstravaganza’ in their blurbs, if they’d like.)

ASH: Still one of the best looking manga being released in English right now. 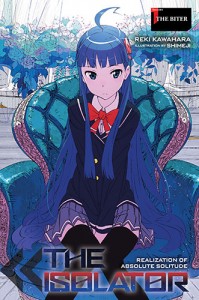 SEAN: Given the huge popularity of Sword Art Online, and the slightly less huge but still pretty good popularity of Accel World, Yen On licensing a new Reki Kawahara novel series seems obvious. This one’s even in hardcover, so is getting the deluxe treatment. It’s called The Isolator, and seems a bit more sci-fi/aliens than his other series.

Pandora Hearts has some light novels as well, and we get the first in the Caucus Race series next week. Melinda?

MELINDA: Honestly, I had no idea about these! Well, count me in!

SEAN: As for Sword Art Online itself, Vol. 2 of the Progressive novel series takes us into uncharted waters: this hasn’t been adapted in anime or manga form yet. It apparently has elves!

On Yen Press’s manga front, we have the first volume of Alice in Murderland. Given it’s Kaori Yuki, I’m sure the pile of corpses that will no doubt stack up as the series goes on will be exquisite.

SEAN: And continuing with Alices, Are You Alice? has hit nine volumes and still doesn’t know.

Barakamon has its 5th volume of small town life and occasional calligraphy.

ASH: Barakamon has really started to grow on me.

SEAN: Bloody Cross just announced it’s ending in Japan, but I think we still have a few volumes to go here. This is the 7th. 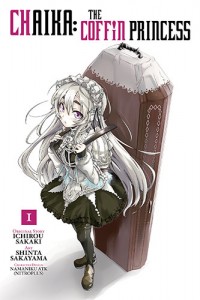 From the author of Scrapped Princess comes another kind, Chaika the Coffin Princess, a fantasy series about a young girl who carries a coffin on her back. No relation to Shoulder-a-Coffin Kuro, though one has to be side-eyeing Yen a bit here.

A double shot of Kaoru Yuki this month, with the 3rd Demon from Afar.

And a 3rd He’s My Only Vampire, a series I’ve become quite fond of.

MICHELLE: I’ll be reading this one.

SEAN: Love at Fourteen’s third volume will have adorable and heartwarming 14-year-old romance, I imagine.

ASH: I was a little surprised by how much I enjoyed the first two volumes. Definitely plan on reading more.

MICHELLE: And this one, too!

MELINDA: I really enjoy this series, so I’m definitely on board here!

SEAN: Secret has a 2nd volume, no doubt filled with survival games and animal masks. I wish the artist would go back to drawing Higurashi spinoffs, honestly.

Lastly, there’s a long-awaited 2nd volume of Void’s Enigmatic Mansion, which will hopefully become a bit more opaque this time around.

Are you feeling excited? Or merely buried in stuff?