SEAN: I haven’t seen a week this small since Christmas. It’s sort of creepy.

First of all, right after I posted Manga the Week of last week, Dark Horse did a classic date slip, so Drug & Drop 2 is here again. Dark Horse is famous for release date slips, though they’re better than they used to be. If nothing else, it gives the MB team an opportunity to pick it two weeks in a row.

MELINDA: And since I flaked last week, it gives me the opportunity to get excited about it this week! 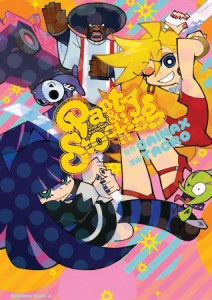 SEAN: The other Dark Horse release is of a very different nature. Panty & Stocking with Garterbelt was a manic anime series from a couple years back, and like many anime had a tie-in manga as well, this one running in Kadokawa’s Young Ace. It’s complete in one volume.

The Heroic Legend of Arslan has its third volume – the series has slowed somewhat (as has Silver Spoon by the same author) due to family emergencies, apparently. Still should be good high fantasy.

ANNA: I keep meaning to check this out! One day!

SEAN: Seven Seas debuts two new series. The Ancient Magus’ Bride is from Mag Garden’s Comic Blade, which we haven’t seen stuff from in years. It’s also a Taisho award winner with gorgeous art. The genre, as you can likely guess, is fantasy/romance, like half the titles licensed recently.

ASH: I’m intrigued by this series and look forward to giving it a try.

ANNA: I am always interested in fantasy/romance. This does sound intriguing.

SEAN: Evergreen is from the author of Toradora!, and from what I hear is something of a similar series, starting out as a sweet romance but introducing darker themes as it goes on. It runs in Dengeki Daioh.

Another debut, this one from SubLime, Viz’s BL imprint. Love Stage! runs in Asuka Ciel, which is what Asuka readers turn to when they’re looking for the harder stuff. It’s also by Eiki Eiki and Taishi Zaou, who I assume most BL fans have already heard of.

MELINDA: I’m looking forward to this, I admit.

MICHELLE: I haven’t read anything by Eiki Eiki and Taishi Zaou in ages! I might have to check this out, too.

SEAN: Lastly, 07-GHOST inches ever closer to completion with its 16th volume.

ANNA: One day I will read it all! ONE DAY!

MICHELLE: Me, too. Every time there’s a new volume, I think, “Oh, I am terribly remiss!” but then I just get waylaid by other things.

SEAN: Anything exciting you for next week?