SEAN: I feel that the “Yen Press” week of every month is just going to be like this now, and we will simply have to accept it.

Before Yen, though, there’s also enough from other publishers to make it a big week anyway. Gantz is still not over, as the 35th volume from Dark Horse will attest.

Kodansha debuts two new series. The first, Let’s Dance a Waltz, is from shoujo master Natsumi Ando, and I reviewed it here.

MICHELLE: This was not on my radar, but I think from your review that I might give it a pass. Thanks for the warning about the “overweight girl transforms to find love” trope.

MELINDA: Yeah, that’s a deal-breaker for me, too.

ANNA: And me as well. 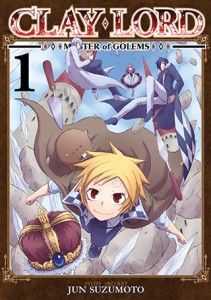 SEAN: There’s also Your Lie in April, whose anime recently finished. Will folks pick up the manga even though they know how it ends? Come on, how can you resist those adorable faces on the cover?

ASH: I’m a fan of music manga, so I’ll be following it. In fact, I’ve already reviewed the first volume!

MELINDA: Now, this I’ll give a try!

SEAN: Seven Seas’ A Certain Scientific Railgun has reached double digits, but can it last much longer with Misaka in this much trouble? Or will a certain guy come to her rescue again? I think we know the answer to that, but read it anyway, it’s good.

Clay Lord: Master of Golems is probably the debut with the least buzz this month, but it’s a Zero-Sum title, so I know Melinda will be interested if no one else. It’s about, unsurprisingly, a young man who can create golems.

MELINDA: Yes. Yes, yes. “Zero-Sum” is pretty much all it takes. And it’s interesting to see this coming from Seven Seas, whom I generally count on to publish manga I would not like at all. So I’m anxious to be proven wrong about that.

ANNA: I need to check out a Manga Classics one day!

SEAN: Vertical gives us the 4th volume of Witchcraft Works, which I’ve fallen 3 volumes behind on, alas.

It has been almost 5 years since the last Black Lagoon volume, and the author insists that it was not “put on hiatus” or anything like that. (The author is notorious for not finishing his series, and may be worried he can’t do the same here.) In any case, for those who forget, the last volume ended with Rock being reminded how far his moral sense has fallen. Can he recover? I talk about that here.

MICHELLE: Wow. I kind of forgot about Black Lagoon.

ASH: It’s been a long time!

SEAN: Viz is re-releasing the manga Gyo in a 2-in-1 omnibus, and I recommend it for all seafood lovers.

MICHELLE: But will it still include the amazing short story, “The Enigma of Amigara Fault”?!

SEAN: And there’s also the 4th Perfect Edition of Monster, which is not quite as body horror as Gyo but is disturbing enough anyway.

There are two flavors of Vagabond next week. We have Volume 37 for regular readers, and the 12th VizBIG edition for newbies.

ASH: I’m a VizBIG reader myself, but either way this is a great series.

ANNA: I also like the VizBig editions of this series very much. 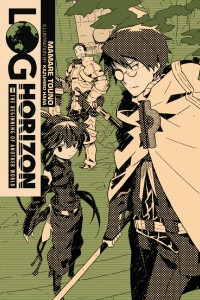 SEAN: Yen On has been trickling out new titles for some time now, but this is the biggest month yet, with 6 different novels all out next week. We start with The Devil Is a Part-Timer!, a comedic fantasy which seems to lean heavier on the comedy, at least so far.

ASH: The anime adaptation was surprisingly entertaining, so I’ll definitely be giving the original series a try.

SEAN: Just in time for the anime debut, we have the 2nd volume of Is It Wrong to Try to Pick Up Girls in a Dungeon? The first volume wasn’t terrible, but also didn’t knock me out. We’ll see how the 2nd fares.

MELINDA: I’ve been considering giving this one a try.

SEAN: Log Horizon is another light novel whose manga made its debut last month, but I understand the plots aren’t too similar. I’m interested in seeing how different this experience is from Sword Art Online.

No Game No Life seems like one of those titles that I will do much better with as a novel – the manga intrigued me, but man that fanservice was rampant. It’s easier to ignore in textual format if nothing else. I want to read this for the codependent heroes, really.

Spice & Wolf has no truck with these newbie Vol. 1 novels. It’s already at Vol. 14, a mature, fully developed title.

Lastly, Sword Art Online wraps up its Fairy Dance arc, which I’m sure will relieve many of its readers. Will Kirito defeat the world’s smuggest villain? What do you think?

MELINDA: I suspect he will, and I’ll be there to find out.

SEAN: Now on to Yen proper. Akame Ga KILL! has its second volume out, and I suspect will get even darker than it already began.

And on a slightly milder note there’s also the 4th Barakamon.

MICHELLE: I plan to get caught up on this soon.

ASH: Barakamon grows on me a little more with each volume.

SEAN: I’ve been enjoying Inu x Boku SS quite a bit, so am sad to see that its author passed away recently. We have a few volumes to go still, though. Here’s the 7th. 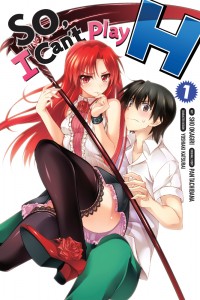 Kagerou Daze is another ‘release the manga a month before the novel’ title, and I believe may be tangentially tied into the Vocaloid franchise, being based off a series of songs that tie together. Its plot is far more serious than you’d expect from that description, though.

If you ever wondered whether Joan of Arc was a magical girl, why not try new Puella Magi spinoff, Tart Magica? (Spoiler: it won’t end well. Is that even a spoiler for this franchise? Or this historical figure?)

If you enjoy busty shinigami, lecherous leads who are prevented by plot circumstances from actually doing anything, and more harem comedy than you can shake a stick at, then you’re the right audience for So I Can’t Play H!. Unlike many other recent titles from Yen, only the manga is licensed at this time.

The second Sword Art Online: Progressive manga should wrap up the first ‘arc’ of the novel, and give Kirito and Asuna fans a lot to be happy about.

Lastly, we get the 7th Tena on S-String, much quicker than we got the 6th volume.

What in this giant mound of manga and novels makes you most excited?