SEAN: No, this isn’t an April Fool, there’s actually quite a lot of manga out this week (not technically a ‘first week of the month’ as it’s the 1st – if that makes sense).

Another era passes, as Dark Horse puts out the final volume of Blade of the Immortal, about which I’m sure Ash can enthuse about much more than I can.

MICHELLE: Wow, how many long-running things have they finished recently? At least two, in my memory.

ASH: It’s finally here!! Nearly two decades after the first volume was released in English. I am indeed enthused.

Kodansha has the 4th volume of Attack on Titan prequel Before The Fall, whose blurb makes it sound as if we’re in for more horrible things happening to good people, in the best prequel tradition.

And Fairy Tail 47 means I am now 10 volumes behind. Ah well. 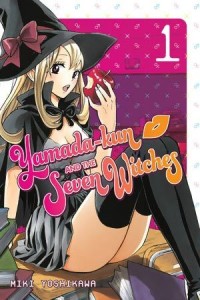 The debut of the week is one I’m quite looking forward to: Yamada-kun and the Seven Witches. I had, years ago, done a license request for the author’s prior Shonen Magazine title, Yankee-kun to Megane-chan. I never got that, but this has much of the same characteristics that made it a fan favorite. Delinquents, body swaps, humor… what’s not to like? Crunchyroll also has a digital version, if you want to binge-read.

ANNA: I think mermaids and fairies are the new vampire!

SEAN: Udon is putting out another manga version of classic literature, with The Scarlet Letter.

Vertical’s Prophecy wraps up with its 3rd volume. Have the guys with paper bag masks considered crossing over with the animal mask folks from Doubt/Judge/etc?

What Did You Eat Yesterday? has a 7th volume, with more food and cooking, and perhaps also some plot as a side dish.

SEAN: Lastly, we have a 6th volume of Wolfsmund, which never fails to put a smile on the face and a song in the heart. I believe Vertical is seeing if they can sell the rights as a musical.

ASH: That would certainly be something.

SEAN: Are you buying manga on the 1st of April, or just avoiding the Internet as sensible people do?