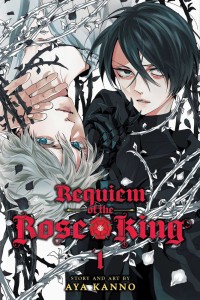 ASH: Although it’s a smaller shipping list this week there are still plenty of great manga being released. But if I’m going to be honest, I only have eyes for the debut of Aya Kanno’s Requiem of the Rose King, one of the manga I’m most looking forward to this year. Shakespearian-inspired drama and appealing artwork? Yes, please!

MICHELLE: As much as I love Knights of Sidonia and am happy that another volume is coming out, I am also going to pick Requiem of the Rose King because I have more than a passing fancy for Richard III and am intrigued to see how Kanno will handle his story.

ANNA: I have to go with Ash and Michelle in picking Requiem of the Rose King. It is certainly one of the most interesting shoujo releases I’ve heard about in quite some time.

SEAN: What they said.

MELINDA: What he said they said.