SEAN: A fairly sedate last week of the month. Not much from Yen this month, oddly. What will we have to talk about—

DIO: HA! You thought this would be Manga the Week of, but it is I, Dio!

Before we get to that, Dark Horse has a very interesting new title coming out: Seraphim 266613336 Wings. A collaboration between Mamoru Oshii and Satoshi Kon, I can only imagine how strange this is going to be. But also highly anticipated.

ASH: I know I’m looking forward to it!

SEAN: Kodansha has a 33rd Air Gear, which continues to be the model all other fanservice-laden roller blade manga aspire to be.

There’s the debut of Maria the Virgin Witch, which would surely have gotten more attention from me if it weren’t surrounded by Kon and Dio. The plot does not interest me, the fact that this is by the author of Moyasimon does.

ASH: That’s what interests me most, too, though I have been hearing good things about the series.

SEAN: And one of my favorite lost causes, The Wallflower, has its 34th volume. I believe the ending is actually coming soon! 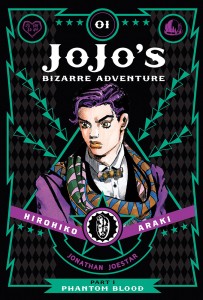 This has been out digitally since September, when I think I featured it here, but man, it deserves to be featured again. One of the most influential, over the top manga of the 20th century, we’ve seen its 3rd arc here before, but now you can see it again for the first time, in deluxe hardcover edition. I refer, of course, to JoJo’s Bizarre Adventure, and trust me, that title is not kidding around.

ANNA: I liked it a ton. The hardcover release is very nice, and I enjoyed all the punching, blood, and references to Aztec sacrificial practices. Also, more punching!

SEAN: One of Yen On’s February releases had to be delayed, so the sole light novel this week is the 2nd A Certain Magical Index. I should mention… it has vampires! Well, sort of. Anti-vampires. Ish?

The 2nd Ani-Imo is out, and I suspect will continue to be as edgy as the first one was. A reminder: technically shoujo manga.

There’s also a 3rd Barakamon, which is also out digitally as of this volume, for those who love digital and were bummed it wasn’t available before.

I keep wishing BTOOOM! Added a new O for every volume it gets to, but to no avail, even at Vol. 9.

MICHELLE: Ugh. I didn’t set out wanting to say “ugh” about BTOOOM!, but now that is my reflexive reaction.

SEAN: The first volume of Gou-dere Sora Nagihara was so over the top in terms of its comedy, fanservice, and general attempts to offend that I’m almost tempted to read this second volume to see if it can keep up the pace. Almost. But not quite.

High School DxD has a 4th volume. I wonder if I’d enjoy it more if the light novel were licensed?

Lastly, we have the final volume of Judge, but don’t worry, more animal-headed survival games are coming soon.

Assuming you’re doing the obvious, what else are you buying besides JoJo’s this week?

ANNA: How could anyone want to NOT buy JoJo’s, is the question!