SEAN: January is a relatively quiet month for manga, usually, and this is a quieter first week of the month, though you might not guess it by the large number of titles coming out way. It’s COMPARATIVELY smaller. 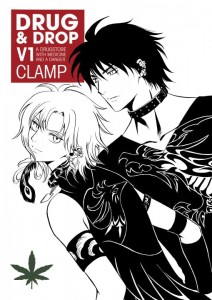 CLAMP fans have been waiting for this one forever, and it’s finally here. The first volume of Drug & Drop comes out next week. The sequel to Legal Drug, which ran in the shoujo magazine Asuka, this runs in Young Ace, a seinen title. Despite that, I suspect the audience is still the same: CLAMP fans. Expect crossovers.

ASH: I’m really enjoying the omnibus edition of this series.

ASH: I was pleasantly surprised by the first volume of Mushroom Pup, but then I like quirky manga.

SEAN: The third volume of Lovephobia is not something I’d call adorable based on its cover, but hey, the inside might prove me wrong. (For the record, the series runs in ‘Comic B’s Log Kyun!’. I’m always wary of magazines with onomatopoeic sounds in their name.)

And A Waltz in the Clinic, which is the sequel to A Murmur of the Heart, seems to have sensuous hand-licking, judging by the cover.

Alice in the Country of Clover gives us The Lizard Aide, which I believe is the first volume in this series to have Gray as the love interest. So, Gray fans, this is for you! Sadly, the artist is the same one as the Nightmare Trilogy, so don’t read it for the prettiness.

Girls Und Panzer has taken its tankery games to much higher stakes with Volume 3, as Miho now faces expulsion from her family if she loses. How will she fare? And what will Yukari do, given she’s the ‘star’ of the manga series?

Strike Witches begins a new tie-in series with the first volume of One-Winged Witches. I’m trying not to be critical, but even its FANS say this 2-volume manga series is for lovers of panties and that’s about it.

Viz has a smaller but robust set of shonen and shoujo for us. 07-GHOST trundles along with Volume 14. There seems to be a woman on the cover! Wait, 07-GHOST has women in the cast? :)

SEAN: Bleach and Naruto both have their 10th 3-in-1 omnibuses out next week.

Jaco the Galactic Patrolman is a one-shot manga from the creator of Dragon Ball and Dr. Slump! I’m not sure if it was always meant to be this short, but in any case, more Toriyama is always nice to see, especially when he’s funny, as he seems to be here.

MICHELLE: I have yet to read Dragon Ball, and Dr. Slump! wasn’t my thing, but I have quite enjoyed Toriyama’s one-shots (especially COWA!), so I’m looking forward to this one a lot!

ASH: Oh, COWA! That was a delightful manga.

SEAN: Kiss of the Rose Princess has a 2nd volume. I thought the first was goofy fun, but a bit slight. Can it grab me further with this one?

MICHELLE: I am wondering that myself.

ANNA: It is fun, but I agree about the first volume being on the slight side. Still, nothing wrong with shoujo brain candy! 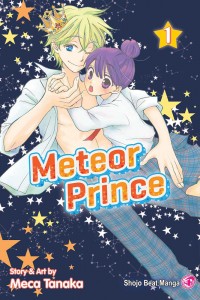 SEAN: Viz’s new shoujo debut is Meteor Prince, by Meca Tanaka. it’s another short one, only two volumes, and is likely far more acceptable than the student/teacher romance of her more famous series Faster Than A Kiss. Old-school fans will also recognize her as the author of Omukae Desu and Pearl Pink.

MICHELLE: Wow, what a premise on this one. “It’s hardly surprising then that a naked alien prince falls from the sky to tell her that out of all the girls in the universe, he’s come to Earth to mate with her.”

SEAN: My Love Story!! was one of the most exciting releases of 2014, and the start of 2015 sees its 3rd volume. Will our lead couple progress in their romance, or is shyness the order of the day? (I can take an educated guess…)

ASH: Love this series so much!!

SEAN: Nisekoi continues to be one of the better harem series I’ve seen in ages, and I am greatly looking forward to the 7th volume (which, yes, has been out digitally since March of last year).

And there’s One Piece, with its 73rd (!) volume. The last cliffhanger promised Rebecca would have a moment of awesome, but I admit I’m skeptical. Perhaps more important to its Western fans, will Doflamingo and Law square off?

MICHELLE: In the most recent volume of Magi, there’s a scene of happy islanders feasting on a giant sea monster and man, that made me crave more One Piece like whoa. I’m glad I won’t have to wait too long.

SEAN: I tend to skip the endless Pokemon releases when I talk about manga here, so I will guiltily note that we see the 26th Pokemon Adventures ship next week, along with the 6th Black and White volume.

Lastly, there’s a 6th Ranma 1/2 omnibus, and a new semi-regular, as Kuno and Kodachi’s father returns from an extended vacation, and he’s just as bad if not worse than his offspring.

What are you starting off the year with?