SEAN: There’s still not a great deal of manga out for this final week of the year, but there’s a bit more than last week. Let’s see what we’ve got. 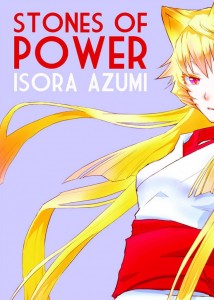 Gen Manga has a new title, called Stones of Power, which would appear from its cover art to star a catgirl shrine maiden.

MELINDA: If there’s one thing I’ve learned about Gen Manga, it’s that I should always pay more attention to it than I think I should. So I’ll be checking this out for sure.

ASH: I remember enjoying the early chapters of Stones of Power when Gen was serializing it, so I’m looking forward to reading the whole thing!

ANNA: Hmm, I look forward to reading your reviews!

SEAN: On to Kodansha. Fairy Tail 45 has a cover that makes me sigh, but ah well. I’m going to guess a lot of battles?

And Say “I Love You” is at Vol. 5, and that cover actually looks really cute? Will the inside be just as cute, or will it be more drama filled?

MICHELLE: Whatever the case, I’m sure it’ll be good!

ANNA: Such a good manga! I remember now that I haven’t read volume 4 yet. I’m going to treat myself to this!

SEAN: That doesn’t seem like a lot. Let’s do something we rarely do: what’s out digitally this month?

Dark Horse seems to have eased up on their app-only titles, as we’re seeing a pile of new digital manga this month that may have already come out earlier exclusively. Kurosagi Corpse Delivery Service, Crying Freeman, Blade of the Immortal, Oh My Goddess, and Mail all have various volumes out.

ASH: Nice to see Dark Horse making these more widely available, especially as so many of them are out of print.

SEAN: The two Kodansha titles I mentioned earlier are also available as ebooks.

Vertical has two more volumes of Black Jack, the 3rd and 4th.

MELINDA: Still so happy about this!

ANNA: Me too! I didn’t collect the whole series in print, so I might pick up a volume or to digitally.

SEAN: Viz has more of their ‘Viz Select’ titles, aka ‘the Kadokawa titles we can license rescue from Tokyopop’. Vol. 12 of Trinity Blood is where TP left off, and so far I don’t believe Viz has actually translated anything new for these rescues (they’re pretty low budget), so this may be it. And there’s the 2nd Mouryou Kiden volume, which is there to remind you why the title ‘ex-CLAMP artist’ is not really a compliment. And there’s a third volume of Zone-00.

ANNA: I am feeling oddly nostalgic! 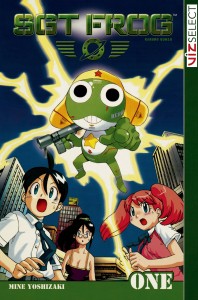 SEAN: Then we have the two debuts. Sgt. Frog is a series that I really enjoyed reading when it was first coming out, though I will admit I felt it was getting a bit long in the tooth by the end of it. It’s great to see back, though, and I am happy to see Vol. 1 digitally here.

The other series, Hands Off!, I know less about. It’s actually finished, with all 8 volumes being released over here. It seems to be an esper series, and I suspect will have hints of BL, like most esper series – and indeed a lot of Monthly Asuka series, which is where it ran.

MICHELLE: That was pretty much exactly how I felt about Hands Off! when it was coming out in print. I bought volume one years and years ago and never got around to reading it.

SEAN: And just as Viz license rescues old Tokyopop titles, so Yen is license rescuing – at least digitally – some of the older titles Viz licensed via Square Enix, who now have a close working relationship with Yen. Nightmare Inspector: Yumekui Kenbun started in Stencil (sort-of shoujo) and then moved to GFantasy (sort of shonen). But the genre it really fits is ‘Melinda’, I suspect.

MELINDA: Should I feel honored that I have become a genre? :D I think so. That said, I missed most of this series in print, so I should probably take the opportunity to pick it up now!

ASH: Nightmare Inspector is a series I’m personally very fond of. Glad it will be reaching some new readers.

MICHELLE: I was always kind of intrigued by this one, but never actually read it.

ANNA: I enjoyed the first couple volumes of this, nice to see it coming back!

SEAN: Technically the title to this next series in North America is ‘O-Parts Hunter‘, but I really hate not referring to it by its original Japanese title, 666 Satan (can’t imagine why they changed it…). If the artist’s last name sounds familiar, there’s a reason: the creator is the younger twin brother of Naruto’s creator. 666 Satan is well-told, if not particularly original.

MELINDA: I’m in for this as well.

MICHELLE: Melinda, would you believe I talked about this series in our very first Off the Shelf column? I did! Here’s proof.

SEAN: Do you plan to use your gift cards to get anything here?