SEAN: Merry Christmas! Have some manga. Since the publishers usually go quiet around Christmas and New Year’s, almost everything is frontloaded to next week. So be prepared to be completely buried.

The Shinji Ikari Raising Project has now officially passed its parent in volume count. It’s coming to an end soon, though. In the meantime, Dark Horse brings us Vol. 15.

Manga Dogs 2 will help us to ask the question, “can the three male leads get any stupider?”. I’m betting on yes.

ASH: I’m sure that’s probably the case, though they’re pretty stupid to begin with.

SEAN: Kodansha also has its 4th xxxHOLIC omnibus. The series was at its high point here, in my opinion.

MELINDA: Even if I don’t think it had a *low* point, exactly, I agree that this was a great period in the series. 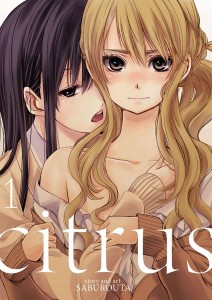 SEAN: Seven Seas debuts a new yuri series with Citrus, which is from Comic Yuri Hime – nice to see a title from that magazine over here again. Expect melodramatic schoolgirls.

ASH: I’m always interested in more yuri in English, so I’ll be checking this one out.

SEAN: There’s the third volume of D-Frag!, one of the funnier series I’ve read this past year.

Girls Und Panzer isn’t over, but there’s always room for one more spinoff series. Little Army follows Miho, the “hardened battle commander” of the original series, as she does tank battles in elementary school.

And Haganai has a second collection of side story comedy for those who feel the main series has too much plot, this one called Club Minutes.

Vertical has a new Mobile Suit Gundam the Origin, and I think Vol. 8 means we’re 2/3 of the way through. Is the cast still alive? (I’m so far behind on this.)

ASH: As far as we know the cast is still alive; the last few volumes have been an extended flashback, so who knows what will happen from here?

ANNA: I’m behind too, but I keep buying it!

ASH: Since so many of Vertical’s Tezuka title have gone or are going out of print, I’m very happy that the publisher found a way to give them some new life.

ANNA: I have much fondness for Black Jack.

MELINDA: I do, too. I’m so happy to see this coming out digitally.

SEAN: Viz has a 10th volume of Afterschool Charisma, one of the SigIkki survivors.

ANNA: Another one of those series I read three volumes of and mean to get caught up on one day.

SEAN: It’s December, so it’s time for the annual release of Dogs: Bullets and Carnage, with Vol. 9 dropping.

The other SigIkki survivor also has a new volume, as Dorohedoro reached its 14th. Ikki in Japan may be no more, but Dorohedoro will be moving to its replacement, so don’t expect it to end right away.

MICHELLE: Someday I really will read these last three. 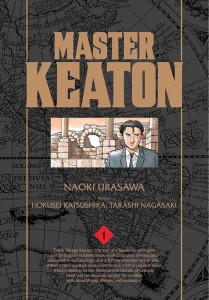 SEAN: It’s been a while since we’ve been able to get excited about an Urasawa release. Now we see an omnibus edition of Master Keaton, which will feature incredibly dramatic insurance investigations. No, really, it’s excellent. Check this out even if you’re not a fan of insurance.

MICHELLE: I am so excited about this!!

ANNA: I’m curious about this title for sure.

SEAN: Think we’re done? HAH! It’s Yen time. We’ll start with the Yen On line. We get the debut of a new series whose title screams “I am a light novel franchise”. It’s called Is It Wrong to Try to Pick Up Girls in a Dungeon? I’m going to guess the answer overall will prove to be “no”, this sounds pretty harem-ey.

ASH: I don’t know much about the series, but the title amuses me, so I might actually give this one a try.

SEAN: Spice & Wolf’s novels have been running since long before Yen On began, and as such, we get lucky Vol. 13 here. That’s the light novel, not the manga, which also ships next week, but is Vol. 10.

And Sword Art Online’s novels start everyone’s favorite arc, Fairy Dance. This is a 2-parter, FYI, the second ships in April. This is the novel, not the manga, which already began the Fairy Dance arc in August, but had Vol. 2 ship last month, which is not Vol. 2 of the light novels, though it adapts part of it.

MELINDA: I don’t hate Fairy Dance, so I’m happy to see this.

SEAN: On the manga front, we have the 2nd of the adaptation of Accel World, having had the 2nd light novel one month ago, which this manga volume does not adapt, as it’s still adapting the first one. Clear? Wait till next spring, when it will get REALLY confusing. Also, hooray for new math.

Alice is really hard to get a lead on, as Are You Alice? has hit Vol. 7 and still doesn’t know.

SEAN: Barakamon seems like a countrified Yotsuba&!, which suits me just fine. The 2nd volume is out next week.

MICHELLE: I still need to check this one out.

MELINDA: I’m happy to see more of this!

SEAN: Bloody Cross has its 5th volume ship. I admit I finally moved on from this, but if you like supernatural action, it certainly fills that need.

Yen has 3 debuts this month! The first is a familiar author to many, Kaori Yuki. She’d been with Hakusensha for years, but recently moved to Kodansha and their eccentric Aria magazine. This was her debut there, Demon From Afar. That said, if you like the sort of thing she usually writes, this is more of that. But in hardcover! 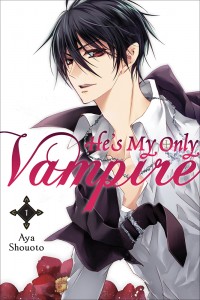 SEAN: The second debut is another author familiar to us, but that’s because of a recent release from Viz. Aya Shouoto had Kiss of the Rose Princess come out via Shojo Beat, and now we see Yen releasing He’s My Only Vampire, which, yes, runs in Aria as well. This combines vampires AND childhood friends.

MELINDA: I’ll give it a try, for sure.

SEAN: There’s a spinoff of harem manga High School DxD, focusing on two of the lead females: Asia and Koneko’s Secret Contract. My guess is this is similar to Haganai’s Club Minutes, aka plotless comedy.

Kingdom Hearts II Vol. 3 is really not helping Yen escape my mocking of their volume numbers.

The last debut is the one I’m most excited about: Love at Fourteen. The plot sounds familiar, with two childhood friends finding love in school. But it runs in Hakusensha’s Rakuen Le Paradis, a magazine I’d kill to see more licenses from, and is apparently very well written.

MICHELLE: I’m really excited about this one, too!

ANNA: This was totally not on my radar before, but it sounds interesting.

MELINDA: My response is *both* of Michelle & Anna’s responses put together.

SEAN: Spice & Wolf has its 10th volume ship this week! That’s the manga, not the light novel. The light novel ships Vol. 13 this week, as I said earlier. Be aware that in 2015, Yen will begin calculating Manga and Light Novel volume numbers in Base 8, as they worry readers may get confused. (I am old enough to know what Base 8 is, yes.)

SEAN: Lastly (at LONG last!), we get the 6th volume of Tena on S-String, a mere 4 years after the 5th. The series is out digitally if you want to jog your memory.