SEAN: December begins, and that can only mean one thing: More piles of manga.

Dark Horse has the 3rd volume of the New Lone Wolf and Cub, with whitewall tires and everything.

Who said DC Comics doesn’t release manga anymore? The Jiro Kuwata Bat-Manga is 350 pages of 60s shonen Bat-goodness, and looks to be amazing.

ASH: This is a really interesting bit of manga history. I was really surprised (and happy) to see DC pick it up!

MELINDA: Oh, wow, I had no idea this was in the works. Count me in!

ANNA: This sounds great. Really looking forward to it.

SEAN: Sankarea is almost finished, with the penultimate volume shipping next week. Will more main cast members die before this zombie romantic comedy staggers to its conclusion?

We get the 2nd volume of the Nightmare Trilogy from the Alice in the… series.

Is the harem complete in Knights of Sidonia 12? Or are more women waiting in the wings? Oh yes, and science fiction mecha battle horror manga as well.

MICHELLE: I am ashamed to admit that I have failed to catch up on Sidonia. I’m still buying it, though. That counts for something!

ASH: I like saving up a few volumes to read at a time; I’m about ready for another binge.

ANNA: My Thanksgiving plans include a bit of a marathon read of Sidonia to get more caught up. 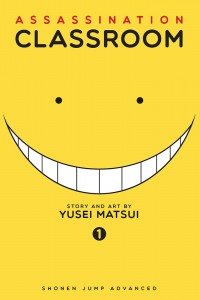 SEAN: On the Viz side, we have the manga they said couldn’t be released! No, the Jump editors had literally said this could not be released in North America. But times have changed, there’s an anime on the way, and here we are. Assassination Classroom may have a scary name, but at heart it’s a classic ‘teacher gets class full of misfits and teaches them how to band together’ sort of title. Kind of like GTO, if Onizuka were an alien with a smiley face for a head. I cannot wait for this.

MICHELLE: Huh, interesting! I am intrigued.

ASH: Looking forward to it!

ANNA: Really, I would buy the first volume for the title alone. I want to check this out.

I enjoyed the second volume of Food Wars! and I think have gotten over its appalling first few pages. So let’s have more exciting shonen foodie manga with Vol. 3.

MICHELLE: I really am enjoying this one.

ANNA: I’m a bit more on the fence about this title, but it does have an interesting premise and storyline to balance out the fanservice.

SEAN: Another penultimate volume (look, I just like saying penultimate, OK?), as Happy Marriage?! 9 inches closer to answering the question mark in its title.

ASH: Penultimate is a great word. I… like saying it, too.

ANNA: I feel like this series has fallen off in quality a bit, but I still enjoy reading it.

SEAN: The second Honey Blood is apparently the last of the main series, though there’s a side volume due out in February. Short shoujo supernatural goodness.

MICHELLE: Or not-so-goodness, as the case may be.

ANNA: Aww, that’s too bad. I usually do enjoy shoujo supernatural titles. I think I will check it out though.

SEAN: Kimi ni Todoke… I feel kind of churlish for saying this, but does it feel we’re dragging our feet a little as the series hits Vol. 20? I do still like it, but wish the end was in sight.

MICHELLE: There is always something very satisfying when long, beloved manga series end. I still love Kimi ni Todoke, but I know what you mean, too.

SEAN: Millennium Snow comes to an end with its 4th volume, and will hopefully manage to resolve the whole “impending death” thing once and for all.

ANNA: I want to go back and reread the first two volumes, then read the new releases. I did enjoy it when it first came out. 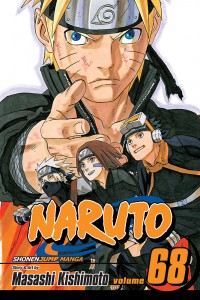 SEAN: Naruto may have finished in chapter format, but the collected volumes live on! Here’s the 68th.

Nura: Rise of the Yokai Clan is still marching towards its ending with the 24th volume.

There is also the 3rd Seraph of the End.

ANNA: I like this series! Not only due to the vampires, but because the light novel origins of the series ensures that there will actually be a decent amount of worldbuilding and backstory for the characters.

SEAN: If Food Wars! seems to mild and sedate for you, Toriko is always ready to take it one level higher, and its 25th volume drops next week.

In case you already miss Vampire Knight, Fleeting Dreams is a short story collection based on the series.

Voice Over! has come to the 8th volume, and is romance finally starting to stroll leisurely towards the reader?

MICHELLE: I find that I would kind of love for that to happen.

MELINDA: Sometimes the stroll is a bit too leisurely.

ANNA: I liked the first volume of this more than I expected to, but I don’t think I’ll be investing in reading more of the series. I think it might be good for younger teens though, and series like that are always welcome.

SEAN: Three volumes of World Trigger means I’m 3 volumes behind. Need to check this series out.

ANNA: I was lukewarm about the first couple volumes, but I can certainly see how someone else might enjoy the series.

SEAN: And a new shoujo series from Betsuhana, as we get the first volume of Yukarism. If you enjoyed Yurara, this is by the same creator.

MICHELLE: I’m really curious about this one! I haven’t read nearly as much Chika Shiomi as I should’ve. (But I bought all her stuff! That counts for something, right?)

ASH: I’m actually very excited for this one! Gender-bending, time travel, historical romance… this should be good.

MELINDA: I am so on board for this. I actually never read Yurara, but I loved Rasetsu, which stood better on its own than I ever expected.

ANNA: I REALLY like Chika Shiomi series. The art is great, and often there are some darker themes in her paranormal romance series that are quite intriguing. My favorite of her series so far is Night of the Beasts that was released by Go!Comi back in the day.

SEAN: What appeals to you in this rather large list?