SEAN: The last week of the month is usually a nice breather after the deluge of the previous three weeks, giving us a chance to catch up on the piles of manga still out there. But there are still a few tasty bits of manga for (American) Thanksgiving. 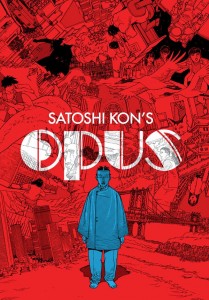 We’ll start with the tastiest, the long-awaited release from Dark Horse of Satoshi Kon’s Opus. It’s an omnibus of the original 2-volume Japanese release, and also apparently fairly metatextual. It’s also by Satoshi Kon, which is reason enough to buy it.

ASH: Oh! I knew this one was in the works, but hadn’t realized it was being released so soon!

MELINDA: Wow, this snuck up on me!

SEAN: From the sublime to the ridiculous, as Kodansha has the 2nd omnibus release of Attack on Titan Junior High. A lot of fans of the regular Titan series I think found this humor a bit too broad for their tastes, but I loved it, and appreciated the focus it gave to some of the minor characters from the main series. For anyone who likes comedy gag manga.

ASH: I agree. The first omnibus was surprisingly entertaining.

SEAN: Fairy Tail has its 44th volume, and we’re only 4 months behind Japan now!

There’s also the 2nd volume of xxxHOLIC Rei, where I keep hoping they’ll ignore that something is clearly wrong with this universe and keep giving me wonderful short unconnected supernatural stories.

MELINDA: I’m totally on board with whatever is wrong with this universe, and definitely looking forward to this volume! Hurray!

SEAN: If Syaoran shows up, I’m blaming you.

ANNA: I never thought the day would come when I would be very ambivalent about a CLAMP book, but here we are.

MICHELLE: I’m not exactly ambivalent about it, but I never finished the first xxxHOLiC, so Rei is sort of putting the cart before the horse for me.

SEAN: Cardfight!! Vanguard has its fourth volume come out from Vertical Comics. I hear the manga and anime are quite different.

Lastly, we have a digital only release (the physical volume is out in February), but it’s one we have been waiting almost 20 years for. The final volume of Neon Genesis Evangelion drops next week, and fans keep wondering if its finale will be slightly less apocalyptic and bleak than the anime or movies. We’ll find out soon.

Anything whet your appetite as you wait for all that turkey?