SEAN: After the deluge of the last two weeks, I am relieved to say that next week is at least a LITTLE quieter. Unless you’re Kodansha.

Speaking of which, apologies to Kodansha and Viz– I missed two of their titles that are out this week. The 2nd Heroic Legend of Arslan is already out! Go get it, it’s good! And Viz has All You Need Is Kill, the manga based off of the novel (as opposed to the earlier comic based off the novel).

ASH: I really enjoyed the original All You Need Is Kill novel, so I was happy to get my hands on the manga omnibus. I haven’t finished reading it yet, but am already very confident in recommending it over the graphic novel adaptation.

MELINDA: I can’t believe I haven’t picked this up yet, considering the artist. What have I been doing with my time??

ANNA: I feel guilty I haven’t started reading the Heroic Legend of Arslan yet.

SEAN: On to next week. Dark Horse has its second omnibus of Samurai Executioner, which pretty much lives up to its name. 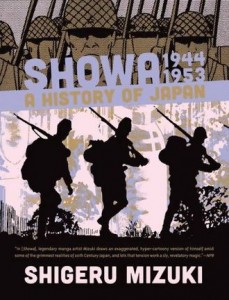 Drawn & Quarterly has the 3rd big volume of Shigeru Mizuki’s Showa, this one covering the years 1944-1953. It is an absolute must read.

SEAN: Kodansha time, and they have a lot. Air Gear does not have QUITE the same gravitas as Showa, but at Vol. 32 I don’t think it has anything to prove, really.

Cage of Eden is down to its final quarter, and I suspect we will start getting answers soon, or at least fewer baffling questions. And more naked bathing as well, of course.

After reading Ubel Blatt, seeing the more mild and cute fanservice from The Seven Deadly Sins seems like a relief. The 5th volume arrives next week.

Tsubasa Reservoir Chronicle has a 2nd omnibus. Will you be caught up in time for its new sequel starting up next year?

MICHELLE: Eh? I was totally ignorant of that. I never did finish the first one! 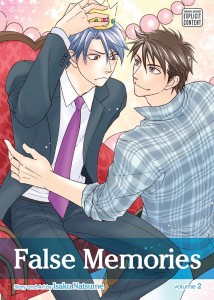 SubLime gives us the 2nd volume of False Memories, which would appear to involve a Burger King crown of some sort.

MICHELLE: I believe Anna vowed to get caught up with this series last time there was a new volume. Did you fulfill your pledge, Anna?

ANNA: I’m also feeling guilty for not fulfilling my pledge! But I did buy the missing volume 5 that was preventing me from getting caught up, and I started reading it only to get distracted (as usual) by shoujo manga from Viz. Maybe I will fulfill my pledge this month. It could happen!

SEAN: I believe that the 9th volume of the Fullmetal Alchemist omnibus is the final one, in which case it contains one of the best endings in shonen manga. But you should know this already.

ASH: Such a great series.

MELINDA: I can’t believe just how happy it makes me to consider new readers finishing this series for the first time.

SEAN: Lastly, Rin-Ne keeps chugging along with its 16th volume.

MICHELLE: I wish I could be excited about RIN-NE, but it’s always pleasant, at least.

SEAN: Which manga cries out for you to buy it?