I pondered for a blatantly ridiculous amount of time over this week’s manga recommendation for my teen students. I considered another classic epic (Please Save My Earth), a couple of overlooked romances (Rasetsu, Crown of Love), or perhaps something for my pre-teens (Shugo Chara!). My most serious consideration, however, went to Ai Yazawa’s yet-unfinished (but totally glorious) romance/friendship epic NANA. As the subject of my first, and still most famous, “persuasion post,” Why You Should Read NANA, it’s pretty obvious that I’m a long-time fan, and recommending it seems like a no-brainer—at least for my older teens. But the more I thought about it, the more I found myself thinking about the things it lacks. NANA has a great deal to offer of interest to my teens… beautifully written characters (many of whom are pursuing an artistic field), complicated relationships, career angst, epic friendship, and (of course) gorgeous, gorgeous artwork. Things it doesn’t have, however, include genuine interaction/conflict with parental figures, anxiety over education, or queer characters of any kind—stuff that is important and relevant, particularly to my older teens. 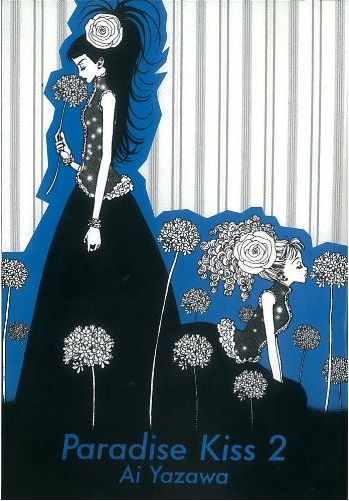 Fortunately, I don’t even have to stray outside the same artist’s catalogue to find all that, and more. Which brings us to Yazawa’s much-celebrated (at least here at Manga Bookshelf) josei series, Paradise Kiss. Originally serialized in the women’s fashion magazine Zipper, Paradise Kiss tells the story of a high school senior named Yukari, who finds herself recruited by a a group of college fashion design students to model for their senior project. The encounter is life-altering for Yukari, as it not only forces her to face some hard truths about her own future and academic prospects, but also sweeps her into a tumultuous romance with George, the group’s charismatic, mercurial designer.

With all that in place, if you’re expecting a standard romance, you’d be gravely mistaken. While Yukari and George’s relationship is certainly central to the story, its essential disfunction is really the point. And though it manages to heat up the pages pretty intensely at times, the story’s real stars are, to my mind, its supporting characters, particularly diminutive seamstress Miwako and trans pattern-maker Isabella, who regularly battle it out in my heart for the position of “favorite character.” I’ll admit that Isabella usually wins. From our Off the Shelf column on the series:

Isabella is my favorite character in the series by far. In fact, I even joked when this title was first chosen for the MMF that my contribution would be an essay entitled, “Why I love Isabella” (or something along those lines). Not only is she a wonderfully warm and nurturing character, as you mention here, but she’s also the one who is best able to see the truth about everyone else, unhindered by insecurity or personal bias.

Additionally, she’s just about 100% responsible for my ability to like George, which took a hell of a long time to develop, to be honest. It took me several times through the series to get over my deep intolerance of George’s refusal to take responsibility for his role in the lives of others, and it was only Isabella who was able to convince me that George’s unquestioning, immediate acceptance of her true self made him worth reconsidering.

You can read the rest of that article or my original review of the full series for more on my complicated feelings about George, but perhaps the better idea is simply to read the series yourself!

Originally published in North America by Tokyopop, the series was recently rescued by Vertical, who gave it a beautiful new visual treatment (larger trim size, high-quality paper, gorgeous new covers) and a new translation, which has some ups and downs. On the upside, Vertical’s translation removes some of Tokyopop’s mild censorship (particularly in terms of George’s sexual preferences and other similar topics). On the downside, the prose is noticeably more awkward in some spots, one of which I detailed in my review of the first volume. In any case, I own both versions of the series, so local students who are borrowing can consider these issues and choose their poison.

The truth is, no matter which print version you’re able to pick up, you’re in for a beautifully-drawn, emotionally complex story, told in a remarkably concise fashion. To quote myself, “I feel that I could go on forever and still fail to do justice to the sheer exquisiteness of this series, so I’ll wind things up here. Suffice it to say that Paradise Kiss, with its complex look at beauty, longing, and personal discovery, truly is a bit of manga paradise.”