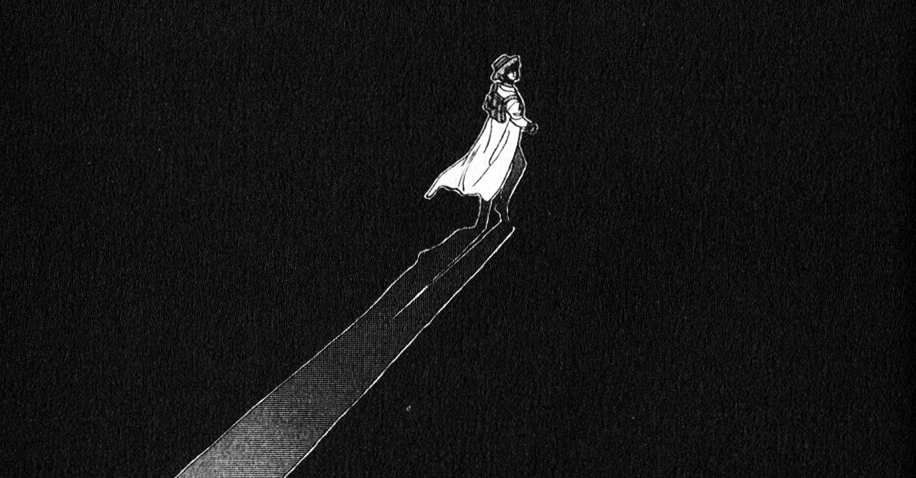 MELINDA: It seems to be the sound of… AWESOMENESS. Or, y’know, typing. One of the two.

MICHELLE: Oh, it’s starting to come back to me now. You’re Belinda, right?

MICHELLE: More or less! And I’m feeling the strongest desire to tell a really stupid joke, for some reason…

MELINDA: And I feel the unexpected desire to listen to one. So, shoot!

MICHELLE: Let’s see…. how about… What did one lawyer say to the other lawyer?

MELINDA: I don’t know, what?

MICHELLE: “We are both lawyers.”

Wait, that was a question. Um. Er. Another question?

MELINDA: Okay, here goes: Have you been reading any manga lately?

MICHELLE: What a timely query! As a matter of fact, I have! 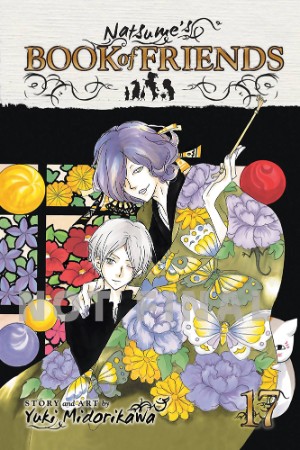 MICHELLE: Well, one of the things I read was the latest volume (17) of a much-beloved series, Natsume’s Book of Friends by Yuki Midorikawa. This has really become one of the few series where I have to read the new volume as soon as it comes out. It’s episodic, which is not normally my thing, but with this series, it’s just got such a languid fairy-tale feeling to it that I honestly hope it never ends. I am perfectly okay with the lack of urgency.

Possibly I have made the series sound dull, but it really isn’t. Natsume is eager to learn about yokai and their ways, so it’s more a tone of… respectful discovery? Something like that. Anyway, the first two chapters here involve a yokai who looks like a teenage human and the girl who loves him. It’s a classic case of immortal-guy-teen-girl love wherein the guy knows that it’s not going to end happily, but the girl is insistent upon pursuing it anyway. And Natsume can’t help but cheer them on. A third chapter finds Natsume drafted to join a yokai game of hide and seek while Nyanko-sensei is off getting drunk.

I was a little disappointed at first that there were only three chapters about Natsume and that other two delved into the past of Shuichi Natori, famous actor and exorcist, but I should’ve trusted Midorikawa more, because I ended up liking them quite a lot. It turns out that Natori originally became an exorcist to help assuage humans’ fear, so his intentions were good, but at the same time we know that Natsume will later have cause to question the practice of exorcism.

Sorry for rambling on there, Belinda. In short: I continue to love this series.

MELINDA: Despite the fact that I let this series go a while back, I find that I’m genuinely happy to hear that it is still lovely in the ways that it was always lovely. And maybe a little regretful that I did let it go… but maybe with its episodic nature, it would be possible to still peek in every once in a while. You make that sound very tempting.

MICHELLE: Oh, I’m really sad to hear you let it go. You probably could pop in without missing too much, though Natsume has slowly been growing more confident and social, interacting with his classmates a little more and seeming at peace with his new living situation. Other than that, things are pretty much the same.

What’ve you been reading, if not Natsume? 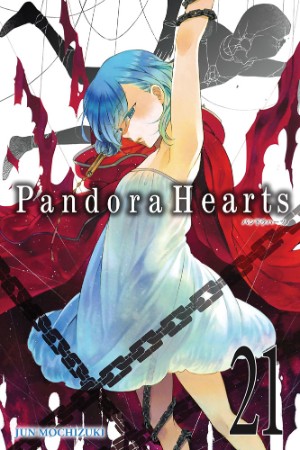 MELINDA: Well, I’ve also been spending time with the latest volume of a beloved series, though in my case, the series is Jun Mochizuki’s Pandora Hearts. I’ve loved Pandora Hearts for a long time, for various reasons, particularly its endearing characters and its pretty, pretty artwork. Plotting, as you know, has had its ups and downs, at least in terms of coherence, but the tension has always been there. This has escalated dramatically in the past few volumes, and given everything that ultimately happens in volume 21, it’s kind of hilarious to note that it almost feels like a bit of a rest, at least to start.

After numerous betrayals, revelations, and deadly battles, this volume opens with most of the original gang (Oz, Alice, Gil) regrouping in a relatively secure location without much idea as to how to proceed. This state of affairs doesn’t last long, but it feels oddly peaceful, just for a moment, and even Oz, who has been through so much, seems rather like his childish self again, if irreversibly tinged with sadness.

This sense of quiet is short-lived, and soon the tension and new revelations start piling up again, but it’s to Mochizuki’s credit that this continues to feel fresh and exciting. The story’s many twists at this point read mainly as well-plotted and perfectly paced—and thank goodness, considering how quickly and frequently things change now in this series. Every time it feels like things are finally about to come clear, we discover that everything we thought we knew was wrong.

I’m sure you’ve noticed by now that I haven’t even mentioned my favorite character, Xerxes Break. He features heavily in this volume as well, but I think there’s almost nothing I can say that isn’t incredibly spoilerful, so I’ll leave it there for now. Needless to say, his fate holds my heart cruelly in its grip, and that grip is only getting tighter.

You know, I often find myself disoriented when I first start reading a new volume of Pandora Hearts, but even picking up this volume several months late, I was able to just right in, and now I can’t wait for more. Fortunately, the next volume is due out soon!

MICHELLE: I’m a few volume behind with Pandora Hearts, but I do know what you’re talking about with those calm-before-the-storm moments that Mochizuki sprinkles in there. I left off with a very Loveless-style cliffhanger involving Gil’s allegiance, and I thought he was my favorite character, but now you’ve got me worried about Break, so perhaps I was wrong about that. I clearly need to get caught up!

MELINDA: You have so much heartbreak and renewal (rinse, repeat) to come, my dear Michael. So much. And I suspect I do, still, as well.

So what else have you pulled off the shelf of late?

MELINDA: I thought so! 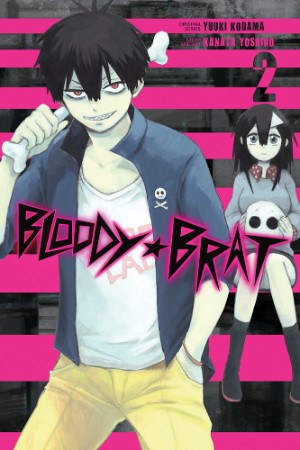 MICHELLE: Well, I seem to recall that we both found Yuuki Kodama’s Blood Lad to be an unexpected delight. I’ve also been reading the related Bloody Brat, in which Kanata Yoshino replicates Kodama’s art style with eerie accuracy and basically offers up a series of four-koma comics and silly short stories starring the characters. The second volume has just been released.

I’ve gotta say, these are not fabulous jokes. You’re really not missing anything if you don’t read it, even if you’re a Blood Lad devotee. However, after initially thinking to myself how I wasn’t even being moved to smile, this volume really grew on me. It was just so unrelentingly doofy that I found myself enjoying it somewhat despite myself.

There are no deep themes here. There is absolutely no plot here. There are lots of jokes about crotches and wolfboys who can’t help but fetch sticks and catdudes experiencing the flehmen response in reaction to natto. I probably cannot stress enough how silly it is, but on the whole, it’s actually kind of charming.

MELINDA: You’ve left me feeling rather conflicted here, I admit. I do love Blood Lad with the fire of a thousand suns. But I’m not entirely sure my life is empty without four-koma silliness (which tends not to do well with me, in general). The crotch jokes aren’t helping to convince me. Should I be convinced? Will I actually find it charming?

MICHELLE: I find I cannot answer you with assurance either positively or negatively. I think this is probably one of those things where you just have to see for yourself. For me, it’s worth it to get another nugget of Blood Lad, especially since it’ll be a long time before we get another installment of the main series.

Read anything else this week? 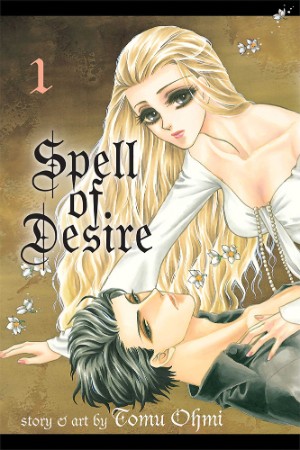 MELINDA: I did indeed! Finally, this week, I caught up with the first two volumes of Tomu Ohmi’s Spell of Desire, the latest in Viz’s line of semi-trashy josei manga rebranded as shoujo for North American readers. To be clear, despite the description I just gave, there’s definitely a level on which I enjoy these series, but with the frequency of these newer releases I’ll admit that the standard tropes are beginning to wear.

In terms of these standard tropes, Spell of Desire is nearly indistinguishable from Ohmi’s earlier series, Midnight Secretary, which just finished its run with Viz earlier this fall. In both series, a supposedly plain, sexually inexperienced heroine is compelled by unexpected supernatural circumstances into a decidedly erotic but nominally utilitarian relationship with a handsome, mysterious, and emotionally unavailable man, whose obvious romantic feelings are apparently invisible to the heroine, who feels she must squash her own growing affection so as not to cause trouble for anyone. Add some varying details (the particulars of the supernatural circumstances, workplace, and clothing preferences) and this is pretty literally the premise of both series.

I can’t deny that I’m tired of this premise. I’m tired of the contrived supernatural relationship, the heroine’s persistent self-denial and low self-esteem, and the level of reverence given to mysterious, controlling men. I really could not be more tired of these things.

Fortunately, there’s still something about Spell of Desire that is keeping me interested. Maybe it’s the morally ambiguous animal familiars. Maybe it’s the ongoing mystery surrounding the heroine, Kaoruko’s, mother. Whatever it is, I’m grateful for it, and I expect I’ll keep going with this series, at least for the time being.

MICHELLE: Whenever mysterious, controlling men are deemed sexy, I always think about Kate Beaton’s Dude Watchin’ with the Brontes.

I haven’t yet read the second volume of Spell of Desire, but I too found something about the first volume that compelled me to recommend it. I especially appreciated that the lead male was at least kind to ailing kittens.

One of the things I liked about Midnight Secretary was that the heroine was extremely proud of her professional competence as a secretary and doesn’t relinquish that, so I have hope that Kaoruko will have a bit more spine than one expects, too.

MELINDA: I have such hopes as well. And as much as I cringe at certain popular josei tropes, I can’t help but be grateful when anything intended for adult female readers is released over here. Even when there are vampires. Or witches. Or anxious virgins in their twenties. (Wow are there a lot of those in josei manga.)

So, Michael… now that we’re wrapping up this column, how does it feel to be back together again? I, for one, am feeling kinda giddy.

MICHELLE: It feels pretty good! We should do it again sometime!

MELINDA: I agree! Until then…