SEAN: I’ve been joking about the large amount of manga coming out last month and this month, but a look at what’s coming in October tells me I should have held back. October is vicious. That said, next week has a far greater amount of manga than usual on 4th weeks of the month, so let’s take a look.

MICHELLE: I just really cannot be bummed about that.

SEAN: Dark Horse has a 6th Lone Wolf & Cub Omnibus, which unsurprisingly has nothing to do with Spice & Wolf at all.

ASH: That it does not.

SEAN: DMP has a trio of new BL manga releases. Apple & Honey is apparently quite heartwarming, A New Season of Young Leaves is a schoolboy romance, and Twittering Birds Never Fly seems to be the darkest and most psychological of the three.

ASH: I’m really happy to see A New Season of Young Leaves finally being released after being delayed so many times. It has the same author as Seven Days (which I loved), so I have high hopes for the manga.

MELINDA: Oh, I also loved Seven Days… I will have to check this out.

SEAN: Kodansha has a 3rd xxxHOLIC omnibus, which hopefully continues to show off Watanuki, one of the best male leads they’ve ever had. 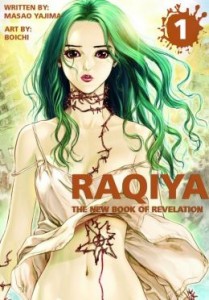 SEAN: One Peace books has two volumes of a new series that could not be farther away from its previous license, Whispered Words. Raqiya: New Book of Revelation is a seinen manga from Kodansha’s Morning magazine, and deals with God returning to Earth, sort of.

ASH: It also deals with heavily armed heretical cults. And lots of things explode, too.

SEAN: I enjoyed the first volume of D-Frag! more than I expected, with its focus on the weird rather than the cute. I’m hoping for more with Vol. 2.

Seven Seas has a third volume of Dance in the Vampire Bund: The Memories of Sledge Hammer, and yet I betcha he still hasn’t said “Trust me – I know what I’m doing” anywhere in it.

I enjoyed the first volume of Girls Und Panzer more than I expected, with its focus on the tanks and teamwork rather than the cute. I’m hoping for more with Vol. 2.

Series based on Alice in Wonderland are to the last two years what vampires were to the two years before that. Here’s I Am Alice: Body Swap In Wonderland, from the author of Dictatorial Grimoire. I’m hoping for some nice snark.

ASH: Oh, I had missed the Dictatorial Grimoire connection. It should have interesting character designs then, if nothing else.

SEAN: World War Blue has got to be running out of old-school video games to turn into fantasy kingdoms, given it’s up to Vol. 7.

If you enjoyed the first volume of the Accel World light novel from Yen On, perhaps you will also be entertained by its manga equivalent. I look forward to seeing if our hero’s weight is drawn purely for comedy or not.

MELINDA: I’m interested in this, and your question, too.

SEAN: I suspect Bloody Cross 4 will be the volume that finally makes me decide to continue with the series or not. Let’s hope it’s a good one.

The Disappearance of Nagato Yuki-chan has its 6th volume of being mild, adorable, and having minimal conflict. Can it keep this up? 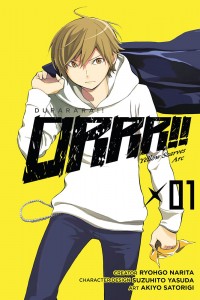 Each adaptation of a Durarara!! light novel seems to get its own separate manga series, so this 3rd series adapts the 3rd novel. After focusing on Mikado and Anri in the first two, Masaomi should get focus here.

I love GA Art Design Class, probably more than it deserves, and definitely more than any other bloggers out there. Don’t care. Cannot wait for Vol. 6.

And for the rest of the Manga Bookshelf team who aren’t waiting for moe slice-of life art school antics, there’s Goong 16.

MELINDA: SO MUCH SQUEE.

SEAN: And for those angry at GA for taking up all the artist’s time, there’s a 4th volume of the much darker series by the same artist, Shoulder-a-Coffin Kuro.

And speaking of dark, Soul Eater’s covers are going to be pure black before too long.

If you’ve only been following the Spice & Wolf light novels, why not check out the manga? It’s up to Vol. 9! I understand there is some spice, and perhaps even a wolf (or wolf girl).

ASH: No swordsmen or young children in carts?

SEAN: Lastly, we get a 7th omnibus of the thrilling epic action movie manga Until Death Do Us Part.

MICHELLE: I really need to get caught up with this. I liked the first volume much more than I expected to.