SEAN: A 5th week of the month is usually sparse, but we do have a few interesting things due out at the tail end of July. 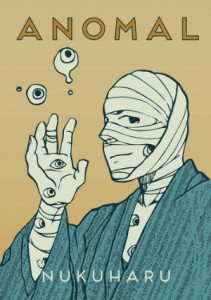 Gen Manga offers you a choice of Indie Manga. Either you will think that One Is Enough, or perhaps you’d rather be with an Anomal. Choose wisely. (They do both look intriguing.)

MICHELLE: Wow, it occurs to me I haven’t read any boys’ love in ages.

MELINDA: Same here, and this needs to be rectified.

SEAN: If you prefer your manga a little more insane soap opera-ish, Kodansha gives you the 8th Missions of Love volume.

ASH: I’ll admit to actually enjoying Missions of Love. So much drama!

SEAN: They also have the third My Little Monster manga, where the heroine will no doubt stick to her promise to herself not to get involved with love. Aheh.

MICHELLE: This is the one thing from this week that I’ll definitely be picking up.

SEAN: And there’s also the 4th volume of Vinland Saga, which I suspect may get a lot of people excited, because Vikings make everything better.

ASH: I’m excited!! Vinland Saga is easily my favorite series being released by Kodansha at the moment.

ANNA: Vinland Saga is great. This reminds me that I need to read the copy of volume 3 that I’ve been saving for a day when I need to read about violence and Vikings.

SEAN: Seven Seas has been having a bad July in terms of ship dates. I mentioned Devils and Realist 2 earlier this month, it’s actually been moved back to next week.

ANNA: The first volume was pretty good. I’m curious to see if the main joke in the book gets a bit repetitive in the second volume.

SEAN: Lastly, Vertical has the 5th volume of sci-fi thriller From the New World.

What manga goes best with hot dogs and sauerkraut?