First off, Seven Seas apparently delayed the release of Alice in the Country of Clover: Knight’s Knowledge 1 at the last minute, after we went to press. It’s actually out next week.

ANNA: I hope it features Ace murdering people and getting lost in the woods.

SEAN: Fairy Tail hits its mid-life crisis, as the Big 4-0 hits. Will Erza needs to buy a really big car and drive around with the wind blowing through her hair? 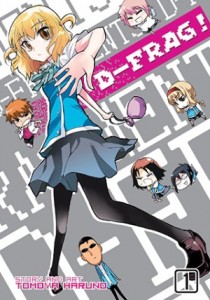 Seven Seas debuts a new series, with the first volume of D-Frag!. This apparently is a high school club comedy, starring one guy and a bunch of weird girls. Despite that, I’ve heard good things about it, as the emphasis is firmly on weird.

There’s also the 2nd Devils and Realist, where I suspect my ongoing enjoyment will hinge on the ridiculous denial our hero continues to exude. Do not disappoint me, manga.

ANNA: I found the ridiculous denial much more amusing than I was expecting with the first volume.

ASH: The first volume was rather amusing.

SEAN: And we have the 6th volume of fantasy/video game encyclopedia pastiche World War Blue.

Vertical gives us a 3rd volume of seinen manga What Did You Eat Yesterday?, which I’m hoping might have a bit more characterization and a bit less cooking this time, but I suspect that’s not in the cards.

MICHELLE: Phew! Finally something on this list that I will be buying for sure!

MELINDA: What they said, plus extra exclamation points! !!!!!!

SEAN: If you didn’t catch the suspense, tragedy, and all around terror from Urasawa’s cult classic Monster, now is the time to pick up the new Perfect Edition omnibuses.

MICHELLE: I’m glad to see this series getting a re-release. I liked it quite a bit!

ANNA: I’m looking over at my stack of unread 20th Century Boys and feeling vaguely guilty. 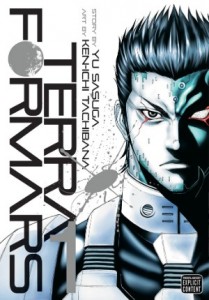 MICHELLE: I have a stack just like it, I’m afraid.

ASH: Personally, I like Monster just a bit more than 20th Century Boys. I’m really happy to see it back in print.

MELINDA: I’m thrilled about this release, since I am one of those who missed it the first time around.

SEAN: And speaking of tragedy, Viz’s new seinen debut is Terra Formars (spelling intentional), a sci-fi story of colonizing Mars which goes horribly, horribly wrong. I’m greatly looking forward to this title, even though I know it will likely gut me a lot of the time.

MICHELLE: I tend to like grim, seinen sci-fi, so I am definitely looking forward to this.

ASH: Terra Formars is a series that I’ve been looking forward to, too. (Plus, I happen to have a thing for Mars…)

MELINDA: I’m definitely on board with this!

SEAN: What excellent yet depressing manga are you reading this week?