SEAN: Lots of things to enjoy in the very busy final week of the month, from a variety of publishers.

I’m not entirely certain who Kintaro is or why he’s so incredible, but 801 Media’s The Incredible Kintaro is here to preach the good word to BL fans everywhere.

ASH: I have it on very good authority that The Incredible Kintaro is one of the most ridiculous BL manga to have been recently released in English.

ANNA: I am looking forward to seeing someone review this! How ridiculous is most ridiculous? Inquiring minds want to know!

SEAN: I have to think that Castle Mango is a very unthreatening name for a castle, and hope it’s not a really sexy yaoi euphemism. Vol. 2 is being released from DMP.

MICHELLE: Thanks for consistently making me giggle with this column, Sean!

ASH: I don’t think it’s a euphemism, but it is the name of a love hotel…

ANNA: That seems logical, I suppose.

SEAN: When Kodansha says they’re doing a speedup, they don’t mess around. Fairy Tail has been coming out so fast it’s almost too hard to keep up, and here’s Vol. 36. 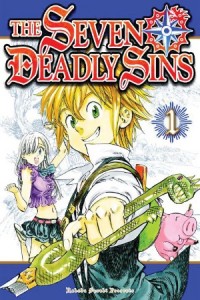 There’s also a new shonen debut, the 4th one this month and the only one not connected with another Kodansha property. The Seven Deadly Sins is the new hot ticket in Japan, so it’s no surprise that it’s getting a release over here. A fantasy adventure manga with holy knights and fanservice, as you’d expect from Shonen Magazine, it should appeal to Fairy Tail fans.

ASH: I’ve heard good things about this one, so I’m interested in giving it a try.

SEAN: Readers may be surprised that I did not reserve the feature image for this post to Vertical’s What Did You Eat Yesterday?, the new seinen manga about a gay couple and the meals that they eat. The reason I did not is I have a sneaking suspicion the Pick of the Week will be unanimous, and therefore the image should be saved for that. As evidence, see the comments below.

MELINDA: I am down with the flu, but I must perk up just a little to join in on this little celebration. Woooooo! *cough* Woo.

SEAN: And there’s a giant pile of Yen, starting with Vol. 4 of fantasy headtwister Are You Alice?

For those who enjoy Blood Lad but wish it was more of a 4-koma series, we bring you the first volume of spinoff Bloody Brat.

MICHELLE: Normally, this wouldn’t be my sort of thing, but I enjoy the humor in Blood Lad so much that I’m gonna give Bloody Brat a try.

SEAN: And if that’s not enough blood for you, have some more with Bloody Cross 2, along with a plethora of religious imagery.

MICHELLE: I was moderately intrigued by volume one, so I’d say it merits checking out the second installment. 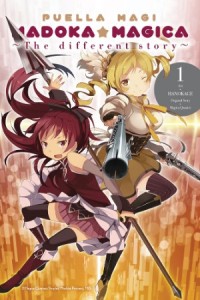 SEAN: I keep forgetting about the Kingdom Hearts releases from Yen, so my apologies. This time around we have the 3rd volume of bafflingly named Kingdom Hearts 358/2 Days.

The new Madoka Magica spinoff, A Different Story, seems to star Kyouko and Mami, and ties into the movie. We shall see how different the story really is.

Soul Eater 19 promises a battle between Black*Star and the corrupted Death The Kid, and if I recall correctly will finally give us an origin story for Liz and Patti.

Lastly, Yen debuts Sword Art Online, a fantasy about MMORPGs based on a light novel series (which debuts from Yen next month). The 2 volumes of the debut arc, Aincrad, seem to have been combined into one omnibus for North America.

MELINDA: I’ll also mention, I guess, that I’ve seen some of this anime, so I’m actually a little excited about both the light novel and the manga.

SEAN: What manga are you discussing over the dinner table?