SEAN: Sooooo much stuff. Let’s break it down. Oh, and apologies for last week, the date of Wallflower 32 got shoved back to May after I’d written the post. This is the danger of last minute date-changes. I will discuss it in May, and no doubt Michelle will have the same “it’s still going?” reaction.

MICHELLE: That is probably true. 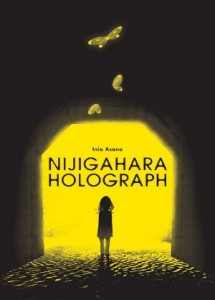 SEAN: As for this week, let’s start with a Fantagraphics title from Inio Asano, Nijigahara Holograph. This single-volume release is dark, tragic, and creepy, and should immensely please Asano fans. Hey, if it sells well, maybe Viz will take a flyer on Oyasumi Punpun.

ASH: This is one of my most anticipated releases for 2014! I’ve been looking forward to getting my hands on a copy ever since it was announced.

ANNA: I am very excited about this! I enjoy Asano’s works very much, and Fantagraphics editions are always a treat.

MELINDA: This is definitely a draw for me. Everything about this sounds compelling.

SEAN: Did you enjoy Jiro Tanaguchi’s The Walking Man but wish it took place 300 years earlier? Than you’ll love the same author’s Furari, out from Ponent Mon.

SEAN: You cannot stop the Alice in the Country of Hearts spinoffs! They are endless! Here’s March Hare, a 2nd series focusing on Alice pairing up with Eliot.

ANNA: I can take or leave new spinoffs, but sometimes they are fun.

SEAN: Seven Seas also has the 6th volume of Haganai: I Don’t Have Many Friends, featuring the tight group of not-friends getting involved in further not-friendship events.

I’ve enjoyed The Sacred Blacksmith far more than I was really expecting, and hope Vol. 4 keeps me happy despite my general distrust of manga fantasy-oriented stories.

Senran Kagura ended up being pretty much exactly what I was expecting, but the 2nd volume should give us more of that as well.

Vertical’s From the New World gives us a 3rd volume as well, speaking of popular titles I try to say as little as possible about.

ASH: I haven’t read beyond the first volume yet, but I have been told the fanservice was toned down considerably in the second. 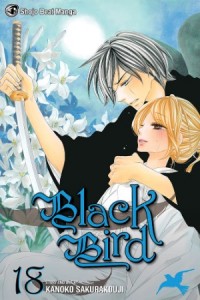 SEAN: There’s no blood on the cover of Black Bird 18, and the protagonists are smiling, so we must have reached the final volume! Black Bird sold a pile, so let’s give a round of applause to this title I never warmed to but others most certainly did.

MICHELLE: I hear Strong Bad’s voice in my head, going “It’s over!”

ANNA: I’m sure that this was a financially remunerative title for Viz, so that’s nice even though I really never connected with this series.

SEAN: Blue Exorcist is always a treat, and I’m sure Vol. 11 will live up to the anticipation and not advance any of the potential romances I read it for.

I fell behind with D.Gray-Man’s omnibuses, so should see if I can pound through them now that the 3rd one is coming out.

I can’t even remember if this Dragon Ball 3-in-1 is the original series, Z, or the color edition. Or the VizBIG edition. But hey, it’s Dragon Ball, surely someone hasn’t read it yet. Somewhere. Perhaps in outer Mongolia.

Oh hey, look, a new volume of Fushigi Yu– (Sean is trampled by the rest of the Manga Bookshelf team rushing forward to squee.)

MICHELLE: Hmm, did I just step on something squishy?

ANNA: If trampling is the best way to express my love for this series, I will be right back as I need to put on my trampling boots!

MELINDA: SO MUCH LOVE. Sorry about the trampling.

SEAN: Ow. Moving on to Midnight Secretary? (cheers but no violence) Excellent. Vol. 4 is approximately halfway through this series, and I expect things will take a darker turn round about now.

ANNA: I do enjoy Midnight Secretary quite a bit!

MELINDA: As do I!

SEAN: Nisekoi continues to try to catch up to its digital releases with the 2nd print volume. Do you like Jump harem comedies? Sure we all do! Well, a good 40% of us, perhaps…

SEAN: One Piece hits another milestone with its 70th volume. Donflamingo steps up to what seems to be the next ‘big villain’ role here, and it promises to be a lot of fun.

MICHELLE: Somehow I’ve gotten a couple volumes behind on One Piece. Clearly I need to rectify that!

SEAN: Comedy volume of the week has to go to Oresama Teacher 16, which is filled with idiots being idiotic. Each volume takes it to a new level.

ANNA: This manga never fails to make me laugh. 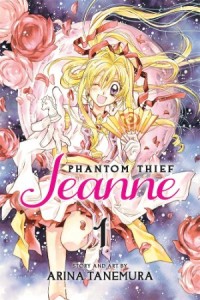 SEAN: License Rescue of the week absolutely goes to Phantom Thief Jeanne, the one remaining Tanemura title that was out of print after CMX went under. Kudos to Viz for picking it up!

MICHELLE: Despite owning the full CMX run (and watching VHS fansubs of the anime long ago), I have not actually read this series. Perhaps the VIZ edition will compel me.

ANNA: This is my favorite Tanemura series, because it is absolutely bonkers. And Jeanne makes failed attempts to turn rhythmic gymnastics equipment into deadly weapons, which is always good for a laugh.

MELINDA: I’m definitely looking forward to having a chance at this!

SEAN: We’ve hit the 2nd to last volume of Psyren, which is good, as it feels like it’s just about time to start wrapping things up. Given it’s a Jump series, I’m not sure how sudden the ending will be, but…

MICHELLE: Some day I’ve gotta catch up on this.

SEAN: What’s Rin-Ne 14 doing among all these Shueisha titles? Take your Shogakukan-ness to the 2nd week of the month where it belongs! Wait, likely it’s here so that it doesn’t get in the way of that week’s OTHER Takahashi release…

MICHELLE: I’m torn. Do I like RIN-NE enough to cheer for it?

SEAN: Skip Beat! 3-in-1 hits Vol. 7, which I think means it’s still dealing with Black Moon rather than Box R.

Strobe Edge 9 is also a penultimate volume. How much worse can things get than they already are? Well, it *is* a romantic comedy…

MICHELLE: No question about these two. *Cheer!*

ANNA: I’m impatient for Strobe Edge to wrap up, but I do enjoy it!

SEAN: Lastly, Tegami Bachi has also reached 16 volumes, and as ever I have next to nothing to say about it.