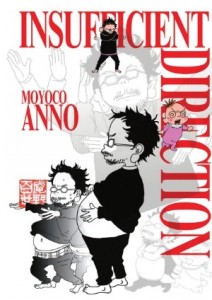 MELINDA: It’s a slowish week for new manga releases, but there is at least one release I’m greatly looking forward to. To be more specific, I’m talking about Insufficient Direction, Moyoco Anno’s comic about her relationship with husband (and famous anime director) Hideaki Anno, out this week from Vertical. I was surprised by a few bits of Moyoco Anno’s personality when I interviewed her a couple of years ago at NYCC, and I expect to be surprised further by this (presumably humorous) look into her personal life. This is a must-buy for me this week!

ASH: Insufficient Direction is a must for me this week as well! I love Moyoco Anno’s manga (so much so that I hosted the Moyoco Anno Manga Moveable Feast last year) and am thrilled that we’re seeing more of her work released in English.

MICHELLE: I have a feeling this one might be unanimous! Insufficient Direction for me as well!

ANNA: I’m going to pick this too!

SEAN: Yup, it’s unanimous. Insufficient Direction for me as well.