SEAN: Assuming that you are able to get out of your house and are not snowed in, there’s a lot to like in this 2nd week of February.

Does anyone here remember Hey! Class President from DMP? Vol. 3 came out back in September 2010. Well, here’s Vol. 4, despite the fact that he surely should have graduated by now. 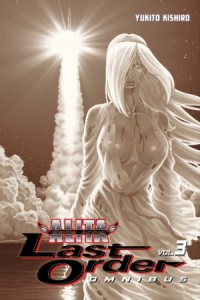 Do you like tournament arcs? Do you wish that they came out in giant omnibuses so that you could get EVEN MORE TOURNAMENT ARC per volume? Then you will love the 3rd Battle Angel Alita: Last Order omnibus from Kodansha.

SEAN: Do you like tournament arcs? Do you wish that they came out in giant omnibuses so that you could get EVEN MORE TOURNAMENT ARC per volume? Then you will love the 9th Negima omnibus from Kodansha.

MICHELLE: *snerk* Somehow, this has left me wondering when/whether The Prince of Tennis will get the omnibus treatment.

MELINDA: This whole conversation just made me smile. Though I mostly don’t like tournament arcs. Unless they are about Go. Apparently.

SEAN: Sankarea looks like it may be taking that big step towards full-blown horror, but will it find the time to be silly and have harem antics? Find out with Volume 5.

Blue Morning 4 is filled with tortured embraces and flowers blooming from nowhere.

MELINDA: I’m looking forward to this!

SEAN: Meanwhile, in Crimson Spell 2, our heroes would prefer to merely glare at the reader. Both of these from SubLime.

SEAN: Knights of Sidonia looks like it may be taking that big step towards full-blown horror, but will it find the time to be silly and have harem antics? Find out with Volume 7. 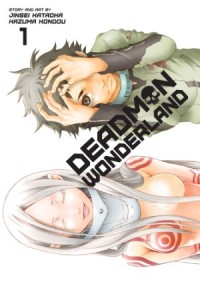 SEAN: Deadman Wonderland manages to combine the survival game genre with a prison drama, as a young man who is the sole survivor of a brutal massacre is convicted of being the cause and sent to Japan’s Next Top Prison.

MICHELLE: I liked the first volume of this, back when it was a TOKYOPOP title. I’m looking forward to being able to revisit it and hopefully get more of the story.

ASH: I enjoyed what TOKYOPOP released, too, though I preferred the earlier volumes over the latter ones.

ANNA: I also enjoyed the first few volumes of this, and it makes sense that it is going to be reissued, what with the anime tie-in. I really really wish someone would license rescue old Tokyopop titles like Demon Sacred and Sky Blue Shore though.

MELINDA: I’m grateful for this one because I missed it the first time around. Count me in on Demon Sacred, though!

SEAN: Hayate the Combat Butler 23 finally begins to get dramatic (no, seriously, it does), but will it be able to actually resolve the Athena plot? Or will we wait another 6 months with a nasty cliffhanger?

The last VIZBIG InuYasha is looking like it may be the last VIZBIG edition period, but it was a nice way to get a very long series.

MICHELLE: I have still not finished InuYasha. One of these days.

SEAN: Our heroes are separated as of the end of the 3rd Magi volume. Can we get them back together in this 4th book? Let’s hope so, I love shonen teamups.

MICHELLE: I’ve been really impressed by Magi so far. Hooray for more.

SEAN: What’s your poison this week?