SEAN: Hey, for a first week of the month, this isn’t too bad! It’s under 20 titles! That’s practically nothing!

Kodansha brings us the 30th volume of Air Gear, which I haven’t read in about 27 volumes, but I seem to recall this may be around the point that they introduced President Obama as a character. Sadly, I doubt this hits the highs of the unlicensable Legend of Koizumi, but it tries.

MICHELLE: Man, it seems like Air Gear has been coming out forever.

ASH: Oh, Legend of Koizumi! I would totally read that.

SEAN: Alice in the Country of Joker: Circus and Liar’s Game has been hands down my favorite of the innumerable Alice spinoffs we’ve seen over the past 3 years. Volume 4 is out from Seven Seas this week, and I can’t wait.

ANNA: I enjoyed the first two volumes of this series!

SEAN: A Centaur’s Life turned out to be a bit less creepy than I was expecting, and seems very interested in its world building. We’ll see how much in can build in Vol. 2.

ASH: So far, the world building has been great in this series.

MELINDA: I’m trying to figure out whether “less creepy than I was expecting” is an actionable recommendation. 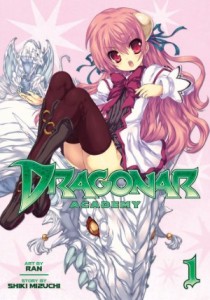 SEAN: New Seven Seas debuts always fill me with a combination of delight and dread, which resolves into one or the other once the title is read, like a Schrodinger’s Box. Light novel series, fantasy, loser protagonist, tsundere lead girl… we’ve seen these elements before – indeed, more than once – from Seven Seas licenses. We’ll see how Dragonar Academy goes.

On the other hand, a new volume of Toradora! cannot possibly make me happier. This is a great story with a top notch adaptation, funny characters and knows when to use humor and heart. An absolute must read.

A Devil and Her Love Song has only hit Volume 13, and yet this is its finale. I enjoyed this series with its blunt and broken lead couple and a good deal of humor with its darkness. An excellent Shojo Beat title.

MICHELLE: I’m definitely looking forward to reading the conclusion of this series.

ANNA: Me too. This was a great, slightly edgy Shojo Beat series.

SEAN: If you enjoyed Dragon Ball, and then enjoyed it again in the huge VIZBIG editions, well then why not buy it again in full color? Dragon Ball Full Color 1 actually appears to be Dragon Ball Z, meaning I’ve no interest in it. (I like my Goku goofy). But DBZ fans should greatly enjoy seeing it again with bright colors.

Happy Marriage?! 4 would appear to be the volume that reminds us this is a Petit Comic title, and earns its M rating. Good to see the couple finally getting close. 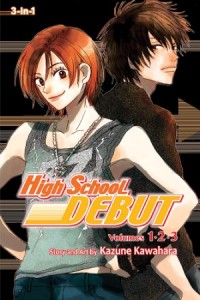 SEAN: I somehow missed High School Debut when it first appeared, so am delighted that there is a 3-in-1 release so I can appreciate it again. Its heroine is apparently dense enough to rival Special A and Voice Over. I like cute but dense in my fictional manga heroines.

MICHELLE: I love, love, love High School Debut. I’d definitely rank its heroine about the one in Voice Over!.

ANNA: This is a wonderful series. It deserves to be reissued!

MELINDA: I adored this series and its heroine!

SEAN: Kamisama Kiss 14 takes us back to the past, as a new crisis forces Nanami to go back and find out how Tomoe got to be the way he is.

MICHELLE: It is my goal to get caught up on this soon!

ANNA: Another series from Shojo Beat that I adore.

One Piece’s 3-in-1 finally hits the end of Alabasta with Vol. 8.

Sakura Hime comes to an end with Volume 12. Does this mean we are in some strange world with no ongoing Tanemura manga? Well, next month should take care of that problem.

MICHELLE: What, is there a new one? I do not keep up with Tanemura.

ANNA: Is that the reissue of Kamikaze Kaito Jeanne!? My favorite Tanemura series EVER!!!!!!

MICHELLE: Oh! Right! I still have my CMX volumes, so the VIZ version wasn’t really on my radar. I have very fond memories of the anime, too.

And Voice Over: Seiyu Academy is at Vol. 3, and I have a sneaking suspicion will continue to have its heroine want to sound cute and adorable.

Anything here tickle your fancy?