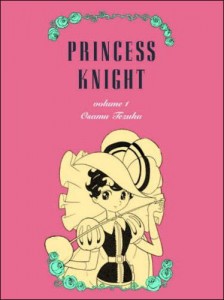 Looking at Osamu Tezuka’s work, I would be hard pressed to pick one thing the man was most famous for. 150,000 individual pieces of artwork, dozens of works in manga and anime, almost single handedly popularising manga as we know it in Japan plus innovations in genre and work ethic. The last point is interesting as it pertains to my review. Shoujo is a genre that had existed before Tezuka came along but he is indelibly linked to it. Princess Knight is a title that many creators of manga in Japan cite as an influence and it’s not hard to see why. A magical fairytale setting, a prince/princess to root for, a cast of evil villains to hate and a wonderful Wagnerian background. So does the book have it’s share of problems? Yes, but I’m not that annoyed by them. Let’s begin, shall we?

I imagine that Princess Knight volume 1 starts much like the 1959 Walt Disney version of Sleeping Beauty. Don’t ask me why, the two art styles are miles apart, the tempo is all wrong and the movie came out three years after the first version of the book finished in Shojo Club. But two things stay true in both cases: the sweeping nature of the story (Princess Sapphire is carried through her adventure by the people conspiring against her, Aurora is carried along by the plotting of Maleficent, dragons, witches, sword fights) and the fact that both stories deserve epic, classical scores. Shame only Sleeping Beauty has that score.

In creating Princess Knight, Tezuka seeks to both subvert and add to the Happily Ever After idea by having the Princess take on the attributes of the Prince arch type. Sharing two hearts, the Prince is daring and brave while being graceful and light (the story goes a bit overboard with some of these traits but I’ll save that for later). It’s hard to decide where Sapphire wants to go as a character from the start of the book. She fulfills all her roles as Prince because she has to but then, in her off time, she likes to be a princess and wear dresses and do all the things that Princess’ are supposed to want to do (need to find that particular rule book and beat up its author) in these tales. But she’s constantly having to walk a tightrope between what she wants and what’s demanded of her. If she slips for an instant, the Duke will strike and that will be the end of the fairy tale. You get the sense from the first five or so pages that Sapphire is screwed no matter what she does. Tink (or Choppy depending on what version you’re reading) is a nice enough character but he reminds me a little too much of Dororo from the title of the same name but with a little more reserve. The characters Tezuka has on display are varied and I do like them but it’s frustrating for me to have to read this as I’m not and was never supposed to be the target audience. You could argue that Tezuka was primarily creating the story for young girls exclusively but since that time the title has taken on a life of it’s own with people of all ages enjoying it. I have read commentary on the story in regards to how Sapphire reacts to danger in both of her guises, male and female. I will get into that in a minute.

But for now let us talk about how the book looks at times to veer into silly country and how it always seems to pull out at the last second. Tezuka is famous for his gags in the middle of high drama and Princess Knight is no exception. In our modern times, this sort of pop culture reference assembly line might seem trite but Tezuka was doing stuff like this years before it was expected. Like calling for the villains to photograph the Princess in a compromising position only to be told cameras haven’t been invented yet. Or the fact that the good and true characters all have named after natural minerals (Silverland, Sapphire) versus the synthetic names of the villains (Nylon, Duralumin). Couple that with Tezuka having characters like Madame Hell (Madame Hell!!!) being entirely superfluous and then Tezuka will draw a whole page panel scene with her bringing the elements of nature down on someone. It’s always hard to gauge whether or not to laugh at what he’s trying to say. What can’t be argued with is the fact Tezuka really keeps the pace going. The use of Looney Tunes-esque sword fighting is quirky, I must admit. It really looks like “Take this! And That! Touché!!! Ha! I meant to lose my sword like that!” in sequentially paced panels. Sapphire doesn’t get a chance to herself and goes from one adventure to another, one life or death moment to another. While Prince Franz goes from wandering pretty boy to foil for Sapphire’s male persona and onto love interest. All while the evil elements conspire against the Princess and her family. Tezuka takes a Disney approach to pacing. In fact, early Disney movies might be the best way of describing the tone and pace of the whole endeavour. Films like Snow White and Sleeping Beauty are reflected in this story with a European style of storytelling (good always triumphs, animals are your friend and yes, there’s magic involved). For me, I like the whole tone and would have liked to see more from Tezuka in this genre.

The tricky thing about this story is two-fold: does the story still hold up against other shoujo works and secondly does the dual-gender identity story have weight today? For my money, it doesn’t really hold up as a shoujo story as the whole genre has moved on from what Tezuka helped to pioneer. It sits more as the story that started it all in a manner of speaking to borrow one of Disney’s taglines. When put against a franchise monster like Sailor Moon, Princess Knight feels quaint but I give it a pass because of the time it was made in and the fact that the story still works as a fairy tail. As a gender identity story, I must say it has things to say in today’s world. I would preface the next statement by saying that it is my opinion that Tezuka didn’t foresee how the manga’s unique twist would be interpreted. How could he as the things that today’s youth and people in general face as personal difficulties couldn’t have been imagined in 1953? Sapphire’s want to be a boy AND a girl goes to the heart what people of all walks of life must go through in the name of love. Who do I love and how does their gender make a difference to me? How does my gender make a difference to them? You don’t have to be one specific gender to know that crosses like these are hard to bear. The fact that Tezuka wrapped it up in a fairy tail makes the transmission of the story’s heart to modern times amazing to see.

When we leave the volume, Sapphire gets involved with the Prince Franz, finds her mother turned to stone and facing enemies both real and supernatural. So where could Tezuka go at the end? Have Sapphire board a pirate ship, of course! I wasn’t expecting that. We’ve gone from Disney to Burt Lancaster high adventure. Where will we and Tezuka goes from here? I am looking forward to find out.