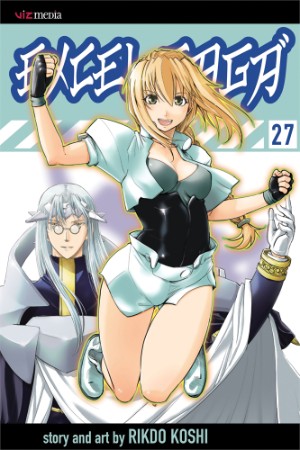 SEAN: This is it, folks! The 27th and final volume of Excel Saga ships next week! There will be laughs! Romance! Resolution! … Perhaps less resolution than we would like, but hey! Everyone in the entire world will be buying this volume!

MELINDA: Or we will at least pretend to, in order to keep you smiling.

SEAN: So, what are you reading this week?

Oh right, there are other releases as well, which are being nice enough to share their release date with the majesty that is the final volume of Excel Saga, so I suppose I should discuss them.

Kodansha has the 6th volume of Missions of Love, which keeps riding the edge between trashy good and trashy bad, but as long as it keeps riding that edge, I’ll keep reading.

MICHELLE: I read the first couple of volumes last year and just never went back to it.

And for those who enjoyed Tokyo Mew Mew and wish it had a followup, well, here’s Tokyo Mew Mew A La Mode in one omnibus. It is not controversial at all, and is beloved by all TMM fans. Really. Trust me.

SubLime has the 6th volume of His Favorite, whose cover is slightly less silly looking than previous ones, but which hopefully is still just as much fun for BL fans. I’ve heard good things about this series.

MELINDA: I’ll be looking forward to see how well this series wears, six volumes in.

SEAN: A brief reminder that NONE of these series are Excel Saga. Ask your local bookseller for EXCEL SAGA 27 by name. Accept no imitations! 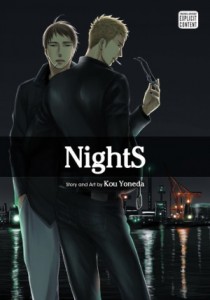 SubLime also gives us a short story collection with the oddly capitalized title NightS. The S stands for… who knows. Seme? Sadist? Saucy?

ASH: I have no idea, but I do know I love Kou Yoneda’s work. I’ve been looking forward to this release.

MICHELLE: Me, too. I really liked No Touching At All.

MELINDA: Apparently, it stands for $. I’ll be picking it up, too.

SEAN: Vertical has the 3rd volume of Medieval manga Wolfsmund, which I have no doubt will continue to be depressing as hell, but I know some others on the Bookshelf enjoy it.

ASH: Yeah, that would be me. The first two volumes were extremely dark and intense to say the least.

SEAN: Viz has the 8th volume of 07-Ghost, still packed with ghosts, gods, and bishops, and still featuring heavily in my “I need to catch up with that” list.

MICHELLE: And mine, as well.

ANNA: Mine too. I need to schedule a catch up with 07-Ghost day, because I did really enjoy the first few volumes, and the subsequent volumes keep piling up.

SEAN: And there’s Vol. 49 of Case Closed, which began in Japan in 1994, and thus manages to be the only series on this list older than Excel Saga. It is also 22+ volumes longer than Excel Saga. And it also has some very well written mystery and suspense… which, by the way, Excel Saga also had, to the surprise of those expecting what the anime gave them.

So, to sum up, Excel Saga. Final Volume. Get It. And some other stuff. What are you getting next week (hint: Excel Saga)?

ANNA: What is this about? I’m assuming it is about office workers and spreadsheets.

SEAN: You will all be first against the wall when Il Palazzo conquers the world. Hrmph.