SEAN: A fairly quiet Week 2 for this last month of 2013, with just a few tasty morsels of manga to take in while you drink eggnog.

SEAN: If you like all the wacky misunderstandings, school romance, and tsunderes of shoujo manga, but would like it with BL flavoring, well, here’s Vol. 4 of Awkward Silence, whose cover resembles Ouran High School Host Club if they ditched Haruhi. 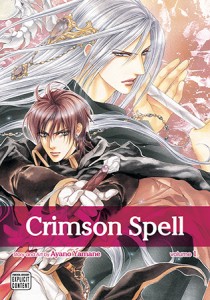 Meanwhile, if you want a fantasy sword and sorcery title with demons who insatiable lust for young men knows no bounds, well, SubLime has you covered there as well, with Vol. 1 of Crimson Spell, from the author of Finder.

ASH: Crimson Spell is actually my favorite manga by Ayano Yamane. Only two volumes were released by Media Blasters back in the day, so I’m very excited that SuBLime rescued the series.

MELINDA: i am really looking forward to reading this. I missed it originally, and it’s so well-loved.

ANNA: Hmm, I’m looking forward to hearing what you guys think about this!

SEAN: Fairy Tail 33 was actually out 12/4, but I forgot about it, possibly as 32 only came out two weeks ago. There’s speedup and then there’s ridiculous.

I will admit, the body horror scene in the last volume of Knights of Sidonia still freaks me out. That said, I’m totally on board with this series now, which hopefully will try not to kill off its entire cast by the time it finishes. Vol. 6 is coming out this week.

ASH: Body horror, mecha battles, and romantic comedy all in one convenient package!

MELINDA: Yes! I can’t wait to read this!

ANNA: Such a great series, I need to get caught up.

SEAN: Arata the Legend is up to Vol. 16, which means only 2 more volumes and it’s as long as Fushigi Yuugi, which is the series everyone remembers its author for. At least for now. Arata’s day in the sun is coming! 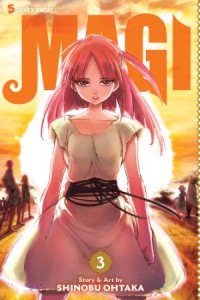 MICHELLE: This is a fun series. I’ll be catching up soon!

Itsuwaribito has wrapped up in Japan recently, but we have a long way to go here in North America. But at least Vol. 10 gets us into double digits. Wikipedia links to some pretty brutal reviews, to be honest. Perhaps a reassessment is needed?

Magi 3 will send us into the manga’s second story arc, and I have been very pleased with what I’ve read so far. I don’t expect that to change.

MICHELLE: Same here! I really like the direction the plot seems to be heading at the end of volume two, and am looking forward to seeing how the story develops from here.

MELINDA: I’m late beginning this, but it sounds like this is a good time to start.

SEAN: Lastly, the Tiger & Bunny series, like Code Geass, has led to an ongoing series of doujinshi anthologies, which likely lends itself more towards the deep male bonding most fans of this series want to see. (Still clean, though – c’mon, this is being put out by Viz.) We get the 2nd anthology this week.