SEAN: Oh. My. God. Sooooooooo much stuff. Let’s break it down. 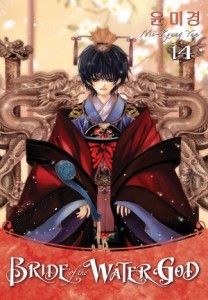 Because the Manga Bookshelf Team demanded it, Dark Horse is bringing you Vol. 14 of Bride of the Water God. I should probably read it at some point – I wonder if there are digital plans.

ASH: I have yet to actually read this, but the artwork is lovely.

MELINDA: The artwork is certainly the highlight of this series, which can be a bit of a mess at times, otherwise, but I’m very happy to see that Dark Horse continues to put it out. It would, indeed, be a great candidate for digital release, especially as it’s gotten so long! I’ll be picking this up for sure.

SEAN: Also from Dark Horse is Vol. 29 of Gantz, which I’ve run out of things to say about, but apparently it sells really well to the direct market. (stares at cast in latex rubber-style combat suits) For some reason.

Speaking of things I’ve run out of words for – and indeed speaking of Volume 29s – we have Air Gear from Kodansha.

Attack on Titan 8 is where those who have only seen the anime should start off, as towards the end of the volume we start treading into unanimated waters. Also, the first spoiler that everyone knows gets revealed here. I’ve discussed it here.

ASH: I’m glad that Kodansha was able to speed up the release for this series.

MELINDA: After NYCC, I’m even more torn over having left this series behind after the first volume. I feel like I’ve missed hopping on the greatest bandwagon of all time.

SEAN: Fairy Tail 31 shows how much of a pain in the ass a time skip can be, and starts a tournament arc.

MICHELLE: All this stuff, and so far there’s a bunch of series I haven’t read and one that I am terribly, terribly far behind on.

SEAN: In case, for some bizarre reason, you did not buy Sailor Moon Vol. 7-12 the moment it hit bookstores and devoured every single page with your eyes, there is now a box set for you to crack open and engulf.

ASH: It also comes with stickers!

SEAN: Sankarea Vol. 3 continues to walk a fine line between servicey romantic comedy and disturbing zombie manga, and to my surprise doesn’t do that bad a balancing job.

ASH: I’ve actually been pretty surprised by Sankarea as well.

I may not have really been tempted to get Wolfsmund from Vertical, but buzz from the not-mes has been excellent. They’ll appreciate that Vol. 2 is due out this week.

MICHELLE: I have volume one; I just need to find the time to actually read it.

ASH: I really enjoyed the first volume. I think it’s definitely worth checking out for people who enjoy historically inspired manga like Vinland Saga.

MELINDA: I never picked up the first volume, but I guess I should! 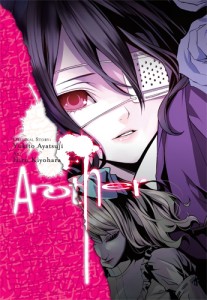 SEAN: Another of those giant done-in-one omnibuses that Yen has favored lately, here’s the complete Another manga, based on the light novels that Yen released digitally this summer. Creepy high school horror catch your eye? This is for you. Also, as a bonus, I’m pretty sure it doesn’t have any survival games.

MELINDA: Heh. I suppose I’ll read it, then.

SEAN: Yen has licensed some interesting stuff lately, probably thanks to the success of Black Butler, which has Vol. 15 drop this week. Is the entire cast damned yet?

Higurashi is in its final arc, but it’s the longest one yet. Vol. 2 of Festival Accompanying Arc contains Vols. 3 and 4 of the Japanese release, and also has my vote for the most horrifying scene in the entire series (it involves Rika’s mother).

Inu x Boku SS is the first of two Yen debuts this week, and has yokai demons and bodyguards, thus allowing me to add another series to my ‘look how popular yokai are in North America now’ list.

ASH: Yokai are the best!

SEAN: Is This A Zombie? 6 is coming out. So there’s that.

K-On! finally wraps up with its High School manga, hoping that fans are as interested in Azusa trying to keep the light music club alive as they were in the original cast’s college adventures.

The Melancholy of Haruhi Suzumiya’s manga adaptation finally gets to one of the most interesting novels, as Sasaki and company debut here.

MICHELLE: Another whole mess of stuff I have nothing to say about. Bad manga reviewer! Bad!

MELINDA: Hmmm… perhaps this is the time for me to pick this adaptation back up again.

SEAN: Oh god, don’t read the mediocre adaptation, read the original novels! Books 9-11 are this arc. 10 and 11 come out here next month. 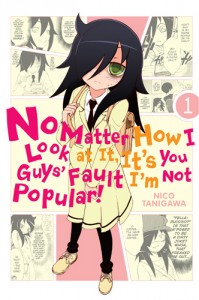 As featured on a giant banner at New York Comic Con, Yen’s other big release this week is No Matter How I Look At It, It’s You Guys’ Fault I’m Not Popular!, Vol. 1. Just call it WataMote like everyone else. I discussed Vol. 1 here.

ASH: I’m looking forward to giving this series a try, even though I can never seem to remember the title.

MICHELLE: Finally, something to go “woo” over!

MELINDA: Oh, Pandora Hearts, dear, heart-stomping Pandora Hearts. It just won’t be satisfied until I’ve been utterly destroyed. This, of course, is awesome.

SEAN: Puella Magi Oriko Magica wraps up, I believe, with this second volume. But don’t fear, I’m sure there are other Madoka Magica spinoffs out there to have cute girls suffering for your enjoyment.

Lastly, there is Vol. 4 of Triage X. I used up my lack of enthusiasm with Is This A Zombie?, so this can’t even get that much.

Surely with all this, there must be something you want. What is it? (And be warned, it gets no better the week after.)