SEAN: Things are getting busy here with NYCC happening this week, but that doesn’t mean we can’t tell you about all the manga coming in once it’s over.

Kodansha has the 8th volume of Animal Land. I dropped this quickly due to its somewhat juvenile mood, but I’ve heard tell that I was wrong to do so as it matures later on. I should try to catch up.

ASH: Animal Land is such a quirky series. It took a volume or two for it to really grow on me, but I ended up quite liking it. Animal Land is cute, but it can also be very, very dark.

MELINDA: I tried getting into this and initially failed. Given Ash’s reaction, I wonder if I should give it another shot?

SEAN: By now Negima’s omnibuses have caught up with the translator changes, so the best reason to get this 8th volume is if you missed the series the first time around.

Seven Seas has its October titles coming out this week. First off, Alice in the Country of Joker has the 3rd volume of Circus and Liar’s Game, one of the more interesting spinoffs it puts out.

ANNA: I still mean to get caught up on a couple of these series.

SEAN: Speaking of franchises, we have Dive in the Vampire Bund, a side story to Dance. Both Vol. 1 and Vol. 2 are out this week.

Haganai: I Don’t Have Many Friends is the title I’ve called the best by default of last fall’s otaku-oriented licenses, and I still enjoy it despite it still pandering much of the time. The 4th volume is already out digitally, but print waits a week. 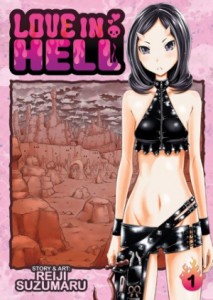 Speaking of which, it’s fall again, so it’s time for a new series of Seven Seas licenses that make me raise an eyebrow. First of all, gotta love that cover for Love In Hell, with a demon in scanty leathers looking like she’d rather be anywhere but on the cover of this book. The synopsis notes it stars a regular guy who meets a whole bunch of crazy girls. What can I possibly say to top such originality?

And there’s also the first volume of Monster Musume, which is about a hapless regular guy and all the crazy sexy supernatural women who make his life… wait, did I get this mixed up with Love in Hell? No? Right, moving on…

ASH: With Love in Hell, Monster Musume, and A Centaur’s Life I think Seven Seas has a corner on cute monster girl manga.

SEAN: I have occasionally been taken to task for forgetting that manwha exists, so best to note that there’s a new Jack The Ripper: Hell Blade (Vol. 5) from Seven Seas, as well as a new Omnibus of the Witch Buster, containing Books 5 and 6.

SEAN: Flowers of Evil has reached Volume 7, which means the cover design is all new. Not so sure if the content is less dark and seedy. I doubt it.

ASH: I think we get a time skip to go along with the new covers this time, too!

MELINDA: I’m looking forward to it!

SEAN: Knights of Sidonia 5 is out as well. I keep waiting for this to be the volume where I drop it for being too depressing, but it’s keeping me hooked.

ASH: I’m hooked on Sidonia, too.

SEAN: I’ve long since lost track of Afterschool Charisma, but it’s quietly reached Vol. 8, and is an Ikki title, so I automatically respect it. Has it run out of celebrity clones yet?

MICHELLE: I sincerely mean to catch up on this, but haven’t done so yet.

ANNA: Me too. I enjoyed the first few volumes. 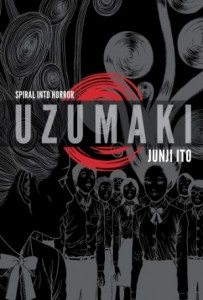 SEAN: It’s also time for Vol. 12 of Real, the basketball title for those who think Slam Dunk is too cute and girly.

ASH: Real! One of my favorite series and I’m not even all that into basketball.

MELINDA: Mine, too! I’m so happy that it’s time for a new volume!

ANNA: You can never go wrong with Inoue.

SEAN: Lastly, the big re-release this week is an omnibus containing all three volumes of Uzumaki, by horror manga author Junji Ito. You’ll read it, you’ll love it, and the spiraling shape will make you go insane.

MICHELLE: Go on, give it a whirl!

SEAN: That’s a lot of manga! Getting any of it?