SEAN: The 2nd week of the month still has mostly Viz (and Viz-owned imprints), but other companies get to make an appearance as well!

Dark Horse has the Trigun Omnibus, collecting the start of the series before it shifted from shonen to seinen and the author effectively rebooted it. To be honest, I think I prefer these early stories to the Maximum years. 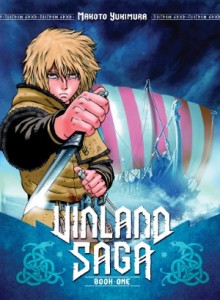 The big release this week comes from Kodansha, with the long-awaited first omnibus of the epic history Vinland Saga. It’s an omnibus, with 2-in-1 hardcovers, and has some extras as well. People have been clamoring for this to be licensed for years, so they’d better buy it, or I’ll be very mad indeed.

ASH: I am one of those who have been clamoring for years. I’m thrilled that Vinland Saga is finally being released!

MICHELLE: While I haven’t exactly been clamoring, I am nonetheless grateful.

ANNA: Planetes was so wonderful, I am really looking forward to reading this. This is one of those titles that has been on my radar for a long time, and I’m happy Kodansha is bringing it out in English.

MELINDA: I’m extremely interested in this, and all your excitement here is amplifying that considerably!

SEAN: So much for non-Viz. Meanwhile, back with our manga overlords, there’s Vol. 2 of Sleeping Moon. Supernatural BL with a cover that not only doesn’t look like it was made using Photoshop but I would actually say is quite good? Sign me up! (Well, not me *personally*, but the rest of the MB team…)

ASH: I haven’t read the first volume yet, since I wanted to wait to read both volumes of Sleeping Moon at once, but I’ve enjoyed Miyamoto Kano’s work in the past.

MICHELLE: So have I.

ANNA: I have a feeling that I’d find supernatural BL more enjoyable to read than non-supernatural BL, I’m eager to hear what everybody thinks of this.

MELINDA: I absolutely loved the first volume of this little series, so this is a major draw for me this week. 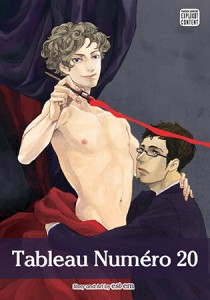 ASH: I would totally buy twenty volumes of manga by Est Em! I was very happy when SuBLime picked Tableau numéro 20 up. I’m greedy and want even more of her work to be licensed in print, though.

MICHELLE: I actually had no idea there was more est em in the pipeline! Huzzah!

ANNA: I had NO IDEA this was coming out but I say Huzzah too! I’m assuming that this features deeply psychologically nuanced slice of life stories about bullfighting centaurs who are also fans of soccer and not wearing shirts.

MELINDA: I was completely surprised by this, too! Where have I been?? Also: YAY.

SEAN: Case Closed has hit Vol. 48. In Japan, it’s up to Vol. 80, and I’ve got a spoiler for you: Conan is still trapped in the body of a kid. (Or Jimmy, whatever, phooey to localized names.) Indeed, this volume came out 8 years ago in Japan. Which, to be fair, means they’re catching up – when it debuted, it was 10 years behind. In any case, expect some cool mysteries.

I hope I didn’t overhype Magi, which starts slow, as all Shonen Sunday series do. But I really love this type of Arabian Nights fantasy to bits, and it has some entertaining young kids as its leads. Vol. 2 is coming out. I hope it takes off here.

MICHELLE: I definitely enjoyed the first volume more than I expected to and am looking forward to seeing if that trend continues with volume two.

MICHELLE: I keep trying to really like the manga, but the most I can achieve so far is not hating it. Maybe the third volume will be the charm?

SEAN: What floats your Knarr this week? (Google it.)