September 8, 2013 by Melinda Beasi and Michelle Smith Leave a Comment

MELINDA: Hello, Michelle! Wow, it’s been a while, hasn’t it?

MICHELLE: It certainly has! We’ve both had a tremendous amount of stuff going on in our lives lately.

MELINDA: Ooooh yes we have. It’s great to be back here with you, though. I’m dying to talk about some manga! We’ve got two mutual reads to discuss this week. Want to get us started? 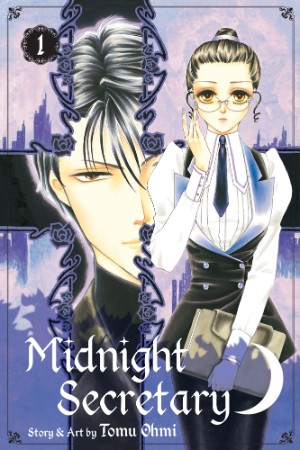 MICHELLE: Sure! I suppose I’ll just start with the one I read first, which was the debut volume of Midnight Secretary, by Tomu Ohmi. Originally serialized in Petit Comic, this seven-volume josei series is about an uber-efficient young secretary, Kaya Satozuka, who is assigned to Kyohei Tohma, the difficult managing director of the tableware manufacturer they both work for. Tohma’s pretty much a jerk and is inclined to dismiss her at their first meeting for her plain looks, but Satozuka counters that he should wait and see what she’s capable of so he can make an informed decision.

She proceeds to do her job with surpassing competence, and Tohma’s ungrateful remarks gradually give way to compliments, though remarks about her appearance persist. In the process, she discovers that her boss is a vampire, and makes it her mission to protect him dutifully, even giving him her blood at one point when a meeting in an atmosphere of religious faith leaves him weak. Of course, she’s unable to get this incident out of her mind, and before the end of the volume she’s shedding her professional persona and getting gussied up to attend a Christmas function with Tohma, whereupon he feeds on her again, then develops some mad craving that all of his other sexy “meals” aren’t able to provide.

I just don’t know about this one. I didn’t hate it and would probably read more, but I’m kind of annoyed by the “competant woman gets undone by the attentions of amorous soundrel” plotline.

MELINDA: Oddly, I found that this didn’t really bother me all that much, and I’m a bit perplexed as to why. Somehow, though, I found that the over-the-top fantasy premise kept me from needing to take anything about it seriously, and in the end I just had a lot of fun.

It also helps that Kaya really is an incredible secretary, so even as we’re being put through the usual “amorous scoundrel” paces, that’s an area where she isn’t remotely vulnerable. So often, Tohma’s type of controlling hot-shot love interest relies on breaking down the heroine’s self-esteem, but when it comes to the one thing she truly cares about—her abilities at work—he can’t even make a dent. If she falls for him? Well, that’s romance. But nobody can damage Kaya’s belief in herself.

MICHELLE: That’s a very good point about her skills—she doesn’t need him to take care of her, because she’s got an excellent professional reputation already. Probably I’m just taking things too seriously, as is my wont. Also, I feel like a crotchety old lady for saying this, but… I kinda want to know more about the tableware!

MELINDA: Normally, I’d be taking it too seriously, too! I have a very limited sense of humor when it comes to controlling, male love interests. Yet somehow, I’m super-relaxed about it here.

I do have some favorite bits of humor in this volume, too. I particularly enjoyed following Kaya’s early experiments with things like crosses and mirrors, as she tries to determine which vampire legends she needs to pay attention to in order to properly protect her boss.

I admit I don’t remember the tableware. Is the a euphemism? What am I missing here?!

MICHELLE: Oh, it was just a throwaway line about what their company does. Care to introduce our second manga? 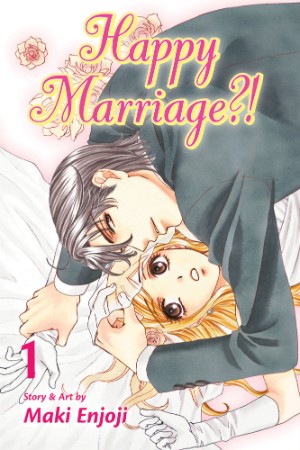 MELINDA: I would! Our second read this week was the first volume of Maki Enjoji’s Happy Marriage?!.

Like Midnight Secretary (and, previously, Butterflies, Flowers), Happy Marriage?! comes to us from the josei magazine Petit Comic, released here under Viz’s Shojo Beat imprint. And, like both Midnight Secretary and Butterflies, Flowers, the series features an office romance between a young woman and her boss—in this case, office lady Chiwa Takanashi and her company’s president, Hokuto Mamiya.

Chiwa works full-time at the Mamiya Company, but moonlights as a hostess in an effort to pay off her father’s business debts. Unlike her coworkers, she’s fairly uninterested in attracting a boyfriend, let alone anything more serious. But her life is turned upside-down when the company’s Chairman offers to eliminate her family’s financial troubles if she’ll agree to an arranged marriage with his grandson, Hokuto, who also happens to be her boss. Hokuto has his own reasons for agreeing to the marriage (namely, keeping his position as company president), and though Chiwa’s reservations are considerable, she ultimately agrees.

The two move in together (against Chiwa’s wishes) and this leads to a number of embarrassing moments as well as the disappointing revelation that Chiwa’s new husband is a complete slob. He’s also a devastatingly handsome, predictably controlling romantic lead, who taunts her with a sexy secretary while improbably pledging sexual fidelity to his wife of convenience. Misunderstandings and wackiness ensue.

There’s nothing really new in this series, as you may have guessed, but it’s genuinely fun and (so far) less maddening than, say, Butterflies, Flowers, which is a compliment, I suppose.

MICHELLE: After a notably inauspicious start—the scene in which Chiwa conveniently forgets to bring new undies to change into after her bath, and then just so happens to trip over a cushion and expose her goodies to Hokuto is particularly cringe-worthy—I actually kind of enjoyed this one. True, Hokuto can be quite controlling—he arranges for them to get locked in the company archives so they can have time along together—and, like Tohma, makes remarks about Chiwa’s looks and status (“If people found out that I married a woman like you it’d ruin my reputation”), but has some redeeming points, like his intention to take the marriage vows seriously. Chiwa can be irrational—she’s the type to storm out after an argument but forget her purse—but I liked that she will actually ask for help when she needs it as well as express her gratitude.

This arrangement and their personalities reminded me a lot of a manhwa plotline, actually. Something akin to Full House.

MELINDA: It’s funny that you should bring up Full House, Michelle, because I found myself thinking of another manhwa series, So I Married an Anti-Fan, which similarly pushes its heroine and hero into a “fake” relationship that (presumably) becomes a real one. And though Happy Marriage?! lacks the outrageous K-drama-esque quality that made Anti-Fan so much fun for me, I really did enjoy this first volume as well.

I think, similarly to the way you reacted to Midnight Secretary, I was bothered that Chiwa falls for Hokuto so quickly, and perhaps that’s where it differs from the manhwa we’ve mentioned, too. I mean, he’s not a monster, and he does sweep in fairly heroically in the last chapter to save face for Chiwa at her class reunion. But I suppose I’d prefer the bickering to last as long as possible in a story like this.

MICHELLE: Oh, yes, Anti-Fan is probably a better comparison! I think I have a much lower bicker tolerance than you do, so was pleased to see scenes wherein Chiwa and Hokuto are actually able to really talk to each other happening as early as volume one.

I can see myself reading the complete run of both these series, but I’m not sure whether I’d reread them.

MELINDA: I’m absolutely certain I’ll enjoy reading both these series all the way through… and that I’m unlikely to re-read them. Which is interesting to note, since I’d absolutely re-read both the manhwa series we’ve brought up in comparison. I’m trying to put my finger on what exactly makes the difference, and the closest I can come is “personality.” Both of those manhwa series feature an excess of individual personality as the primary element of their charm. These josei romances, on the other hand, I think are charming largely for their sense of sameness and familiarity.

Like most high-school romance series, these office romances are compelling in part because we know exactly what’s going to happen and we can just relax and enjoy ourselves as the inevitable plays out. And though they each begin with their own premise, they’re ultimately alike enough that they kinda ran together for me as I read them. In fact, I had to correct myself early on in the discussion of Midnight Secretary as I began to discuss a romantic rival that I later realized was from Happy Marriage?!

MICHELLE: Yeah, in particular the guys are similar, what with the mix of insults and compliments and all of that. Sometimes I was reminded of those Harlequin romance manga adaptations, too, but I’d definitely say these are several steps up in terms of originality, even being as similar as they are. I think the conclusion to Happy Marriage?! is a little more obvious than Midnight Secretary, but I can certainly use some easy, cozy things to read now and then!

MELINDA: Definitely! Honestly, none of this is a complaint. Even if my public pleas for “more josei!” are answered by more of this and not as much meatier fare, such as Vertical’s Helter-Skelter (which we originally planned to include with these as part of a josei column, until we realized just how inappropriate that matchup would be), I can enjoy these for what they are. It’s still gratifying to read stories about adult women, and I can’t deny that I love romance. It’s comfort food, no more, no less.