SEAN: First of all, I’m giving up on moving Yen to when I get it. Diamond is shipping it next week to me, but that would mean 25 books this week, and only 3 to discuss next week. That’s just imbalanced. I’ll go back to using Amazon’s street date, and just revel in things on my own earlier. 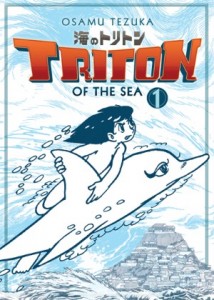 We start off with another Tezuka manga, as Vol. 1 of Triton of the Sea hits stores via Digital Manga Publishing. Another late 60s/early 70s Tezuka title, this was serialized one page at a time in Kodansha’s daily newspaper Sankei Shimbun. The story involves humans and mermaids, and is not as peppy and cheerful as Unico and Atomcat were.

SEAN: DMP are slowly returning to print, which means more BL titles as well. The Tyrant Falls in Love has hit 8 volumes, and judging by the description it’s done that by basically being a giant soap opera. Expect emotions.

MICHELLE: I’ve never read any of this series, but I’m very happy to see DMP returning to print editions.

ANNA: I’m also glad to see that DMP is returning to print.

MELINDA: I hated the first volume of this series and then loved the second. I’ve been warned off later volumes of the series by fans who know my tastes, but I’m still glad to see it returning to print.

Kodansha has the 2nd Battle Angel Alita: Last Order omnibus. I think this volume will feature the title’s descent into the Tournament Arc from Hell, which it takes several years to emerge from. That said, the fights are quite well drawn.

And the second volume of No. 6 drops, where no doubt our hero continues to find out how this world really operates and has more not-quite-ship tease with his newfound companion.

MICHELLE: I’m going to give this series one more volume at least, but I’m feeling a little meh so far.

SEAN: SubLime has the 2nd volume of Blue Morning, for those who want butlers and masters and really well-done cover art.

MELINDA: I kinda can’t wait for this.

SEAN: For those who don’t want well-done cover art, there’s Embracing Love, debuting here in a 2-in-1 omnibus. See how the leads stare at you. They are serious about being gay. VERY serious.

MICHELLE: *snerk* I believe this is considered a BL classic, so I’m interested to read it.

SEAN: Viz has some amazing titles coming out this week, making my Pick of the Week either a chore or something I will have to cheat on. Dorohedoro hits double digits, which I am honestly delighted by. Still my favorite SigIkki title, and it looks like it may be hitting a point of no return soon in regards to Caiman. 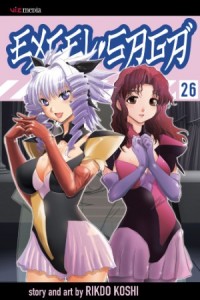 EXCEL SAGA 26! The second to last volume! Do you realize that we are almost at a point where you will not be buying new volumes of Excel Saga? This makes me so sad! And yet, new volume! Everyone must buy it! It has Homestuck, Warehouse 13, and Welcome to Night Vale cameos in it! Really! Trust me! Would I lie to you?

MELINDA: Someday, Sean, I’m going to try to read this series, and it will be entirely because of your undying enthusiasm.

SEAN: InuYasha’s VIZBIG edition hits Vol. 16, containing… (calculates) 3 more volumes! Honestly, I can’t remember. I think it’s somewhere in the 40s. Takahashi fantasy at its most popular. I really must catch up one day.

MICHELLE: I still haven’t finished InuYasha. I think I have the last ten volumes hanging around here unread.

ANNA: I am frightened by the length of this series, but it is totally something I would check out of the library one day.

SEAN: Itsuwaribito 9 brings us to a village ruled by women who have no use for men. Oh dear. In a shonen manga? Please don’t have the village learn a valuable lesson about how awesome the male lead is… 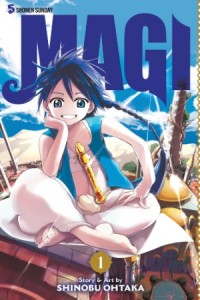 I’ve been waiting for this debut for a while now. Magi is one of Shonen Sunday’s more successful current titles, and I hope the title breaks out here in North America in a big way. Retelling the Arabian Nights the shonen fantasy way, with verve and sass. And yes, starts slow. All Sunday titles start slow.

MICHELLE: I was pleasantly surprised by volume one, so if it gets even better from here, that’s definitely promising.

ANNA: Hmm, this sounds like a good shonen series for me to try out.

MELINDA: I’ve definitely got this in my queue!

SEAN: Neon Genesis Evangelion 3-in-1 gives us Vol. 4, containing Vols. 10-12 of the original title, and everything begins to go completely to hell here. Not that it had all that far to wander, honestly.

If you can’t get enough of the main Tiger & Bunny series, how about a doujinshi anthology? No, not like that, you pervs. This is 100% clean, though no doubt FILLED with ship tease. Vol. 1 of the anthology debuts from Viz.

SEAN: Lastly, the X 3-in-1 hits Vol. 6. If I’m not mistaken, this is where the volumes will have to end, at least until CLAMP returns to the title to wrap it up. Which ain’t happening anytime soon. In the meantime, enjoy where it leaves off.

MICHELLE: I have no idea if it’s still available, but the anime did offer an ending of sorts. Or at least a reasonably satisfying stopping point.

ANNA: This is really one of my favorite CLAMP series despite the lack of ending.

MELINDA: I’m actually really looking forward to this, even though I’ve already read the not!ending. These lovely editions really have given me a new appreciation for the series.

SEAN: Besides EXCEL SAGA!, what else interests you here?