SEAN: It’s the dreaded 5th week of the month, but there’s more to find here than usual, with a couple of really tasty manga treats, particularly if you like old-school manga.

Dark Horse has the 28th volume of Gantz. I’m not certain if they’re still all wearing shiny leather catsuits. I have to assume they are. Sadly, this series is still not Hen or HEN, two series (yes, they are separate, though connected) by the same author that I would rather see licensed over here. 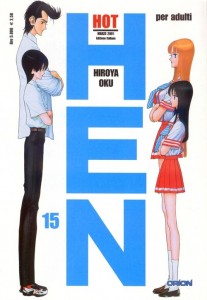 SEAN: Nope. Hen involves a straight high school boy falling in love with another boy, and trying to convince himself that his love is a girl who’s just trapped in a boy’s body. HEN is essentially the same, only the lead is a girl falling for another girl (this version got an anime). They’re both more interesting than they sound. (Hen means ‘strange’ in Japanese.)

MELINDA: Is it awful that I’m more excited about this Hen/HEN discussion than I am about the actual items on this week’s list?

MICHELLE: So am I. Gender-complicated romance trumps shounen fighting sagas.

MICHELLE: Even if there are no chickens.

SEAN: I also note that both Hen and HEN ran in Young Jump (which explains much of the fanservice scattered throughout both titles). So they’re not just seinen gay manga, but MANLY seinen gay manga. :) (They also take place in the same ‘universe’, and intertwine slightly.)

I found out about HEN from Erica, who has the series in Japanese.

MELINDA: I feel somehow that this week’s featured image should be Hen. Or HEN. One of the two. :D No?

SEAN: Sadly, it would require Viz to license the series (or sublicense it to Dark Horse, but honestly Gantz is more their style), which I doubt will happen unless the market changes a lot more than it has to date. This is late 80s-mid 90s stuff, let’s remember. :)

SEAN: Kodansha Comics has a new Fairy Tail, also a Vol. 28. Still speeding up, though if you have a digital option, you can get up to Vol. 33 now, I believe. I believe that fights are still happening.

MICHELLE: That is a good bet. 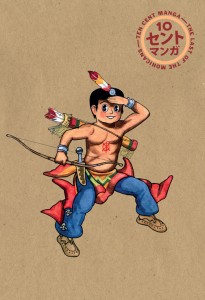 SEAN: Picturebox debut their new line of ’10-cent manga’, which seems to pick up various influential old-school titles, Yes, Tezuka is coming in the fall, but first we have Shigeru Sugiura, who was almost as influential but is criminally underrepresented outside Japan. His Last of the Mohicans came out in 1953, though I believe this hardcover release is from his 1970s redraw/touch-up of that. This is not a straight-up adaptation, though. Surreal is the word of the day. Highly anticipated.

MELINDA: I’m definitely interested in this, though with the slightest concern over my ability to fully appreciate it. But I have high hopes!

ANNA: This sounds off the beaten path and very interesting. I’m always glad when something unconventional gets released, and old-school manga is something that we’ve not seen as much of over here as I would like.

SEAN: And in case you really wanted Tezuka, Vertical has the sequel to Princess Knight, Twin Knights. This came out in 1958, 5 years before the Princess Knight we saw over here, which was a redone version of the original Princess Knight from 1954, of which this is a direct sequel. If that made sense to you, congratulations, you are a Tezuka fanboy. This should be light, frothy adventure fun.

MICHELLE: Maybe it will be missing the elements of Princess Knight that kinda made me mad.

MELINDA: I’m hoping so. A lot.

ANNA: Looking forward to this!

SEAN: Lastly, Yen releases another in their series of Kingdom Hearts releases, this one an omnibus repackaging of Kingdom Hearts II. This is a full-on shonen adventure, which ran in Square Enix’s main magazine, Gangan. The only odd thing about it is Donald Duck and Goofy’s presence, really. Otherwise this could be Fairy Tail or Soul Eater.

MICHELLE: I regret to say that I could not possibly care less about Kingdom Hearts.

MELINDA: I probably could, but not a lot less.

SEAN: Are these titles too old-school for you? Or not old enough? Or do you want HEN as well? (No, it’s still not licensed – that image above is from the French release.)