SEAN: I’m pretty sure there’s something for absolutely everyone in this week’s list. Let’s break it down. 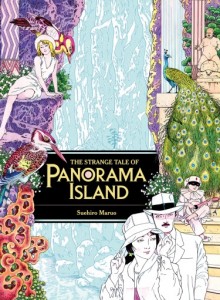 Starting off with a publisher we don’t often talk about. But Last Gasp has not one, but two manga releases out this week. First off is The Strange Case of Panorama Island, which is an adaptation of a famous Edogawa Rampo novel by underground manga artist Suehiro Maruo. Now admittedly, most of the indie manga fans grabbed this at TCAF already. Let’s get it more widely read.

MELINDA: I’m definitely interested, and I wasn’t at TCAF, so count me in!

MICHELLE: Ooh, finally! This one has been on my Amazon wishlist for ages!

ANNA: How many years ago was this announced? I’m glad that Strange Case of Panorama Island is coming out finally, I am very curious about it.

SEAN: And there’s also the 2nd volume of the cute yet disturbing Little Fluffy Gigolo Pelu, the first volume of which came out back in 2009. It’s a Junko Mizuno title, so be prepared for strangeness.

MELINDA: At long last! I still have the first volume that I borrowed from Michelle ages ago, so I guess I’d best reread and send back to her so that she can do the same!

MICHELLE: !!!!! I genuinely had no idea the second volume of this was on the horizon! It might be time to bust out my seldom-seen happy dance!

ANNA: I had no idea either! This is exciting.

SEAN: Seven Seas has a quintet of releases. Alice in the Country of Clover: Cheshire Cat Waltz hits its fifth volume, and continues to feature Alice’s love relationship with Boris.

MICHELLE: I have a tendency to start each new “Alice in the Country of” series, but then never go back to them. That’s the case with this one, too.

SEAN: Gunslinger Girl finally comes to an end with this volume, and if I’ve guessed correctly it will probably not involve everyone living happily ever after and there being punch and pie. Still, it’s a beloved series, and will no doubt be heartwarmingly bleak and tragic.

There’s also the 3rd omnibus of I Don’t Like You At All, Big Brother!!. I think this actually catches us up with Japan, given it’s an omnibus. As such, it may be a while before I have to talk about it again.

The same cannot be said for Mayo Chiki, which resists all my voodoo doll poking at it. Vol. 3 is out next week.

MELINDA: I can’t tell you how little interest I have in these things.

SEAN: Lastly, and if I’m honest most interesting, is the debut of a new series, World War Blue. It’s basically the Nintendo/Sega console wars, only with human personifications. I find the premise intriguing, and it does not seem, on first glance, to be filled with moe incest, so it’s my Seven Seas pick this week.

MELINDA: I agree, that does sound interesting. May be a rare Seven Seas winner for me. 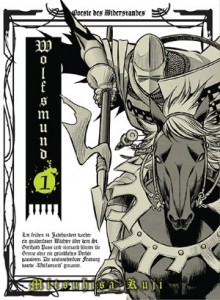 SEAN: Vertical has a debut this week as well, though it’s a much darker series. Wolfsmund comes from the folks at Enterbrain, home to A Bride’s Story, and is a brutal examination of the Middle Ages. It’s supposed to be really excellent, but honestly may be too dark for me.

MELINDA: “Dark” has never scared me away, so bring it on!

ANNA: This sounds a bit odd and potentially interesting.

SEAN: And what would a first week of the month be without Viz? Bleach 57 gives you 57 varieties of plot, 3 speeds (slow, very slow, and stop), and 3,249 characters.

MICHELLE: And again I snerk.

SEAN: Blue Exorcist hits double digits, and I believe finally heads back to Academy life, though who knows how long that will last.

MICHELLE: I need to catch up on this one.

SEAN: A new 3-in-1 omnibus, for those who missed it the first time. Like me. D.Gray-Man 1-3 gives us an introduction to this series that started off in Jump before moving to Square (for the artist’s health reasons, I believe). It’s the series about exorcists that didn’t become a monstrous hit (see above for the other one).

Jiu Jiu finishes with its 5th volume, and I’m so relieved that I believe I will actually read it.

MICHELLE: Jiu Jiu is over now? Hallelujah! I expected it to keep limping on indefinitely.

ANNA: I’m probably not going to read this, but I’m relieved that the series is wrapping up. Viz is also going to be releasing infinitely more interesting shoujo/josei very soon. 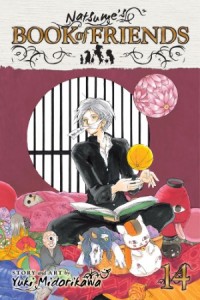 SEAN: Natsume’s Book of Friends is always welcome in my house, even if it likely won’t feature my OT3 again. But Vol. 14 will be filled with melancholy, gentle humor, and piles and piles of yokai.

MELINDA: I haven’t checked in with this series in a while, but it was always a favorite, so perhaps now’s the time to catch up!

MICHELLE: I heart it!

ANNA: I have a stash of volumes somewhere I need to catch up on!

SEAN: Oresama Teacher is one of my top 5 comedy mangas right now, and Vol. 14 will be read as soon as it is in my hot little hands. I love it to bits. (Yes, yes, but I loved The Magic Touch, I’ve heard that before…)

MICHELLE: Usually episodic comedies don’t do much for me, but I frequently enjoy Oresama Teacher.

ANNA: I like this series a bunch. It might not always make sense, but the ridiculous situations are part of its charm.

SEAN: Psyren 11 will, I hope, go deeper into the question of Sakurako’s personality disorder, or at least not feature 200 pages of nothing but psychic battles again.

MICHELLE: I need to catch up on this one, too.

SEAN: Skip Beat! gets its 5th 3-in-one, and I seem to recall this would put it right in the middle of the Dark Moon arc. If you haven’t read it yet, why are you reading this? Read Skip Beat!

ANNA: Skip Beat! is so good, and unlike most other long-running series it doesn’t seem to slow down or have less interesting storylines.

SEAN: And lastly, in Strobe Edge 5, everyone will be sad. This is not so much a prediction as a premonition.

MELINDA: I’m totally on board with this kind of sadness.

ANNA: So am I. This series has really gotten better as it develops.

MICHELLE: Me, too. I like Strobe Edge very much.

SEAN: So what appeals to you on this 4th of July week? (Or, if you aren’t American, this generic week?)