MICHELLE: Hey, Melinda! What did the water say to the boat?

MICHELLE: Nothing. It just waved.

MELINDA: Okay, that actually made me giggle a little bit.

MICHELLE: Victory! While I wallow in this feeling, care to introduce our first selection? (I note this is another week in which Melinda and I have two mutual reads instead of just one.) 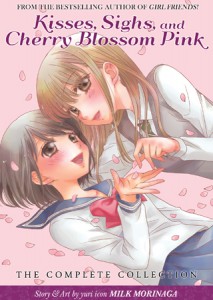 MELINDA: Sure! Hmmmm… now the question is, which one? I guess I’ll start with the book I read last, since it’s freshest in my mind, and that would be Kisses, Sighs, and Cherry Blossom Pink, a double-sized volume of yuri short stories from Milk Morinaga, creator of Girl Friends, a five-volume series that we discussed in this column last year. Though Girl Friends was released here first, Kisses predates it, and it’s easy to see how one grew out of the other.

The volume’s opening chapter, “Not Friends Anymore,” begins the story of Nana and Hitomi, long-time best friends who are about to start high school together—or so Nana thinks. When Hitomi abruptly announces that she’s decided to attend a different school, Nana struggles with feelings of hurt and loss, until she finally realizes that it was her own rejection of Hitomi’s stronger feelings that drove her away. Eventually, Nana comes to terms with her own feelings and the two begin to explore a romantic relationship. Initially they are relieved to have ended up at different high schools, since they’d have a harder time concealing their romance as classmates, but over time they become dissatisfied with living in secrecy and find themselves longing for friends with whom they can share the truth about their relationship.

Though the book is a series of short stories, Morinaga uses Nana and Hitomi’s story to thread the collection together; each story is set at one of the two girls’ schools, utlimately bringing things back to their romance by the end. The stories are lovingly woven together, creating a feeling of real cohesion unusual in the short manga I’ve read. Since short stories aren’t my favorite format for manga, I found this quite gratifying.

MICHELLE: It was that sense of cohesion that kind of threw me, actually, since Sean’s comments about it for the last Pick of the Week column had led me to expect more couples, and more sad stories.

It’s not that I disliked Nana and Hitomi, though I did find them a little dull. More, I liked the stories with ambiguous or less cheery endings, like “Remember This Love Someday,” in which a girl confesses to her boyish friend, only to be kindly rejected by her, or “My True Feelings,” which ends with one girl declaring that she’ll make another like her. It doesn’t really seem likely, in my eyes, so I like it for that, even if it’s played a bit comedically.

MELINDA: I wouldn’t say that I found Nana and Hitomi dull, but the volume as a whole did really make me aware of just how much I crave more grown-up (or at least more complicated) romance. Like Girl Friends, Kisses is nothing if not sweet, but there’s a sameness to even the less overtly happy stories that makes me long for something more. Kisses‘ various romantic protagonists are all nice, pretty girls, carrying on relatively uncomplicated relationships in relatively comfortable environments. Even Hitomi and Nana’s brief stint as runaways is stunningly uncomplicated, as the two shack up in a hot springs resort before heading home to discover that all their problems have magically been resolved. The whole thing is, as I mentioned, unambiguously sweet, and though that’s often enough for me, I couldn’t help wishing for something just a bit meatier.

MICHELLE: “Sweet” is generally enough for me, too, but I think “sameness” aptly describes the aspect that left me feeling a bit blah. Nobody really stands out. None of the background characters is particularly significant. There’s nothing in these girls lives except other girls. It’s like they’re just drifting along, occasionally fancying each other, and not engaging with anything else.

MELINDA: Well said, Michelle. It’s a lovely little collection, don’t get me wrong, just… not much more than that.

So, shall we move on to our second selection? 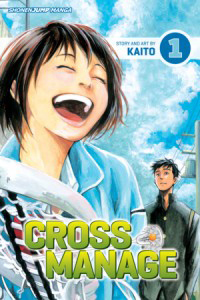 Cross Manage is a relatively new Weekly Shonen Jump series in Japan, beginning in 2012, but we’ve already got a taste of it here, courtesy of VIZ’s digital manga site. (I have no idea whether there are plans for a print edition of the title.) Given that I generally adore sports manga, I really wanted to like this, and though I was kind of disappointed by its first half, it won me over in the end.

Tsunenori Sakurai used to be the star of the soccer team, but after a knee injury resulted in doctors telling him he’d never play again, Sakurai quit the team and has been adrift ever since, trying multiple clubs in the hopes of finding something that interests him. One day, he comes upon Misora Toyoguchi, who is enthusiastically practicing lacrosse by herself. Eventually, his innate sports sensibilities (or something) enable him to see where she is going wrong, and he is able to coach her through a breakthrough in her technique. When he accidentally touches her chest, Misora decides to exploit the situation and get him to manage the girls’ lacrosse team, of which she is captain, despite her lack of skills. At first, Sakurai resists, but can’t help responding to Misora’s passion for the sport, and ends up unashamedly giving it his all.

I just couldn’t get into Cross Manage at first, and kept seeing it ticking off items on, like, the Hikaru no Go checklist or something. Pro jock who has lost his own chance to play who is now mentoring someone else? Check? Underdog school club that has to undergo last-minute recruitment for a game? Check! First game against the most renowned school, with its super-refined, untouchable ace? Check! Gradually, though, I found myself won over. I like that Sakurai can tell Misora frankly how amazing he thinks she is, and of course the whole “I’ve finally found it” (regarding a place to belong) revelation pushes my buttons in a big way. And though Misora herself is somewhat of a cipher at this point, I like some of her teammates quite a lot, especially chubby, shy Noto, who is actually the most skilled player on the team.

MELINDA: In general, you’re a much bigger fan of sports manga than I, so I’m surprised to report that I had no problem whatsoever getting into Cross Manage from the beginning. Now, I’ve actually been following the series for a while, by way of Derek Bown’s Weekly Shonen Jump Recaps, so it may be that his increasingly positive impressions predisposed me to cut it some slack early on, but I liked both Sakurai and Misora right away and felt invested in their stories from the start. Also, I enjoyed the story’s examination of the difference between Misora’s initial raw enthusiasm for lacrosse and her growing seriousness, and how this progression affects her ability to play without caring about playing well.

Since you’ve brought up Noto, though (who is, indeed, awesome), I’ll take this opportunity to mention my one real issue with the series so far. I’ve complained before about overweight manga characters being portrayed as lacking normal facial features, and while this applies to Noto to a small extent (though even Misora’s facial features are pretty basic, Noto’s are disproportionally tiny in comparison to her over-round face), there is another heavy member of the girls’ lacrosse team whose physical features… well… I can only ask “WTF?” 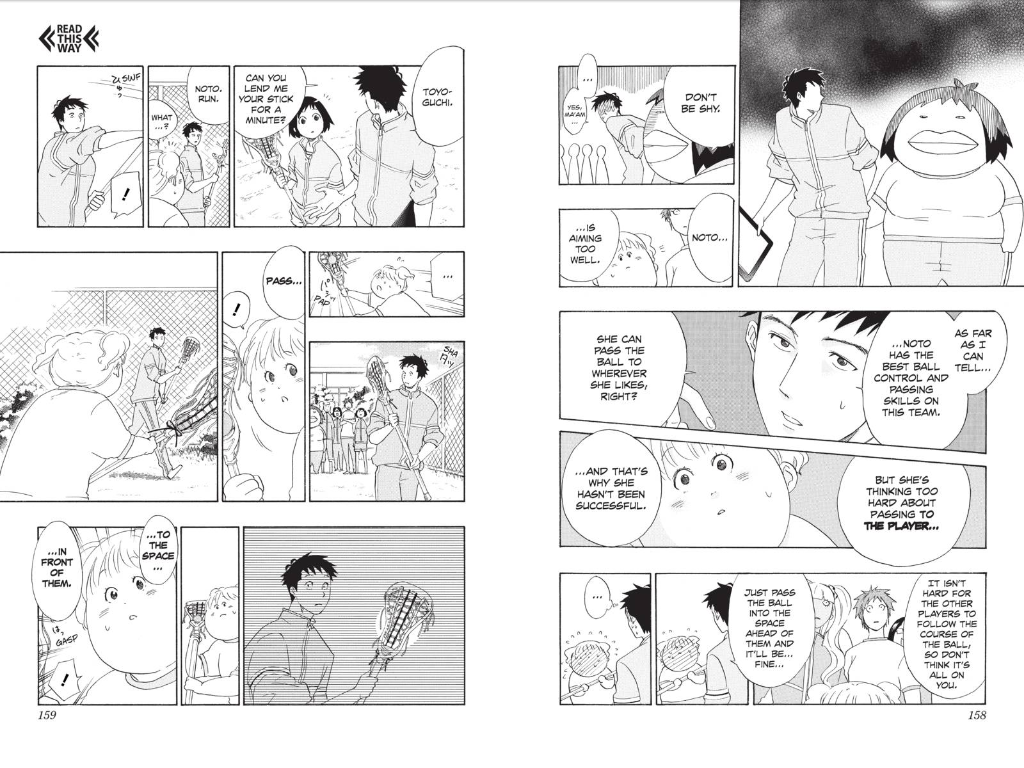 I mean… Yeah. I don’t know what to else say.

MICHELLE: I don’t either. I kept being reminded of Kurita and Komusubi from Eyeshield 21, who are also large and fat and small and fat, respectively. Both have very simple facial features compared to the other characters, but they’re male instead of female. (They’re my favorite characters in that series, actually.)

I guess we could look on the bright side and note that (in both cases) they’re portrayed positively, and their characterization is not based on weight at all.

MELINDA: I guess so? It really bothered me, though, I’ll admit. Not enough to keep me from continuing with the series, but enough to cause persistent discomfort, which is disappointing considering how much I enjoyed the volume otherwise.

MICHELLE: Possibly One Piece has inoculated me against being too distracted by strange body types, since that series is full of them. Granted, it feels much more out of place for just one character to look so weird. In One Piece, there’s a bevy of folks looking weird.

MELINDA: Yeah, I know that odd-looking manga characters are nothing unusual, but my discomfort in this instance is specifically related to the portrayal of fat people as having less complete or less “real” facial characteristics than other people, which implies that they are less complete or less real themselves. It’s a thing.

That said, Cross Manage has a lot going for it, and I’m likely to stick with it.

MICHELLE: Yeah, me too!