SEAN: Between Amazon and Diamond, I’ll sort out this release date schedule yet! (cries) So confusing…

Dark Horse has a 3rd Trigun Maximum omnibus. This was, I seem to recall, right around the point where the art during the fight scenes made me jump ship, but maybe it reads better in a 600-page shot.

ANNA: I couldn’t get into more than three volumes or so of Trigun as a manga, but I did enjoy the anime.

SEAN: Digital Manga Publishing has the 2nd of their Tezuka 3-fer with the done in one Atomcat! It combines Astro Boy and cats. What more is there to say? 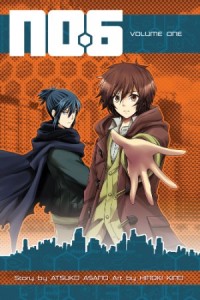 Kodansha Comics has two debuts this week. The first, No. 6, looks fairly serious and science-fiction oriented, and invokes the popular plot of “nice, popular guy discovers the secret facade behind everything he’s ever known”. I suspect his popularity will not last long.

MELINDA: Count me in! I haven’t loved many of Kodansha Comics’ debuts, but this one sounds genuinely interesting.

SEAN: There’s also Vol. 1 of Sankarea: Undying Love. I reviewed this title already here, but suffice it to say this should please fans of both romantic comedies AND zombie films, and shows some promise that it won’t be just another harem series.

MICHELLE: I have to say, I am really weary of zombies.

MELINDA: And I am weary of harem series, but I’ll give it a chance to follow through on that promise.

ANNA: I am also weary of harem series. Not reverse harem though, that will always entertain me. 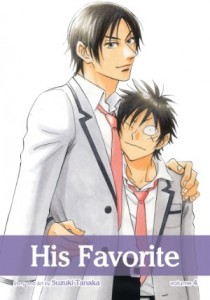 SEAN: His Favorite 4… I can’t with you. Seriously, that cover. That face. Those eyes. This is the best BL series ever. Based just on how the covers make me laugh. Also because it’s Luffy and Rule 63 Robin getting it on. >_>

MICHELLE: *snerk* I haven’t actually read any of this one yet.

MELINDA: I have read *all* of this series so far, and it is exactly as charming as it looks. It is one of my favorite SuBLime releases so far.

ANNA: That does look hilarious.

SEAN: There’s also a new BL series, Sleeping Moon. The cover is far more serious and broody, which likely suits its time-traveling angst shenanigans. The author had 3 one-shots come out from Deux back in 2008, so this is a grand return!

MICHELLE: I liked the oneshots, as I recall, so I’m looking forward to this one!

MELINDA: I am optimistic as well!

ANNA: Huh, this was not on my radar at all, but it looks intriguing.

SEAN: Arata: The Legend hits Vol. 14, which means it only has a few to go before it passes the original Fushigi Yuugi. I understand there are god swords.

MICHELLE: I enjoy Arata in a very Shonen Sunday kind of way.

ANNA: It is very well executed, I just really like Watase’s other series more.

SEAN: And oh look, I bet this gets some Pick of the Week. Loveless has Vol. 11 coming out, in which Seimei reveals that this has all been a wacky scheme to buy Ritsuka the perfect birthday present. Or something.

MICHELLE: Hooray! Except… I can’t read this (or volumes nine and ten) until the omnibus of seven and eight comes out next month. But I’m still happy about it. But perhaps not as happy as *somebody* in this post…

MELINDA: Aaaaaand that would be me. Like Michelle, I won’t be able to catch up to this volume until the fourth omnibus edition comes out next month, but I am pretty much DYING over that.

ANNA: This is another series I need to try – I have the first omnibus somewhere in my house.