SEAN: As I try to wean this list away from just what Midtown Comics says and try to take in more alternate sources (mostly Amazon), I find myself sometimes missing books I should have mentioned. Last week was Dance in the Vampire Bund, this week it’s X, which apparently showed up today and I didn’t have on the MtWo list. So, X 3-in-1 5, which presumably has Vols. 13-15. And a picnic? Came out this week.

MELINDA: I’ve been really enjoying the X 3-in-1 releases. I didn’t enjoy this series much the first time I read it through, but the larger trim size is giving me a fresh appreciation for the artwork, which has really transformed my experience with the series. I’d recommend this new version to anyone who enjoys dramatic shoujo in all its glory.

SEAN: Meanwhile, in stuff coming out NEXT week, Kodansha has a trio of releases. I continue to buy and be entertained by Cage of Eden, even as it hits double digits. Honestly, its faults are the faults of almost have the titles that run in Shonen Magazine – the plot rambles on like a season of Lost without giving much info, and its female characters are all large-breasted nymphs for the males (and reader) to ogle. But – it’s fun snack food manga. 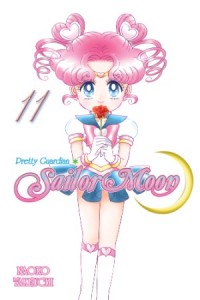 And Sailor Moon is in the home stretch, as Vol. 11 brings us the start of the final arc, Stars. Chibi Chibi is on the cover, and if you’re wondering who the hell she is, well, read on and find out!

MICHELLE: I continue to be sad that the Starlights never got a cover of their own.

SEAN: Seven Seas has a new debut in The Sacred Blacksmith, another title I vaguely recall was adapted into an anime a while back, and is no doubt based on a light novel, as that’s how Seven Seas rolls these days. It seems to feature a female swordswoman, which is a good start, and is fantasy-ish? And I hear this is another one where the anime takes great liberties with the heroine – not for the better. Let’s see if it impresses me like Zero’s Familiar did.

ANNA: This seems potentially interesting to me, but I think I’m going to wait until a few people I know read it.

MELINDA: I’ve become so skittish about Seven Seas. I’m with Anna on this one.

SEAN: Alice in the Country of Joker: Circus and Liar’s Game was one of the most psychological yet, and also took us closer to Alice finding out about her sister than ever before, so I really want to read Vol. 2.

ANNA: I did enjoy the first volume of this series and I plan on reading volume 2 as well. The first volume was not quite as good as Hearts, but not as bad as Clover, so I’m interested to see where this goes.

SEAN: Vertical has Vol. 5 of Limit, which features – shock and horror – a male on the cover. No doubt this is the volume where everything starts to turn around and go great. Aheh.

ANNA: I am feeling guilty that I am three volumes behind with this series! I plan to catch up though. It is always such a nice change of pace, if a Lord of the Flies type scenario featuring stranded schoolgirls could be described as “nice.”

MELINDA: I’ve been looking forward to this volume quite a bit! 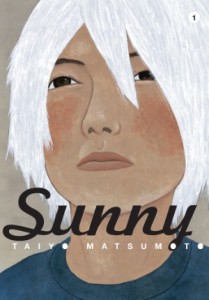 SEAN: Viz has a debut from the author of Tekkonkinkreet, Taiyo Matsumoto. It’s called Sunny, and is the manga to give your indie comics friends who hate manga to say “No, see? See?”

ANNA: I also feel guilt that I haven’t read anything by Taiyo Matsumoto. But this is on my to-read list, so hopefully my feelings of guilt will abate when I read it.

MELINDA: I’ve drooled over artwork I’ve seen from Blue Spring, and I’ve longed to read it ever since I read Kate’s article on the subject, so I’m thrilled to have an opportunity to experience some new Matsumoto along with everyone else.

SEAN: They also have the final volume of Saturn Apartments, one of the quieter Ikki series, but one that had a lot of fans who appreciated just those qualities. Every Ikki series that comes out here is worth it, IMO. Yes, even Bokurano, though I won’t read that.

MICHELLE: I’m looking forward to catching up on/concluding this one.

SEAN: And there is a GIANT PILE OF YEN, which I am getting in a week early, as my shop sometimes does. They will arrive just in time for me to go to Anime North. But it’s OK, as I can bring all my new manga up to Canada! And take it through customs! Hey, wait, found the flaw in my plan.

MICHELLE: Once again, you have made me snerk.

ANNA: I don’t know why, but there isn’t much that Yen puts out that’s on my radar. I need to catch up with A Bride’s Story and want to read Thermae Romae, but that’s about it. Perhaps my problem is that I’ve already read most of their graphic novel adaptations in prose form.

MELINDA: I’m deeply in love with several current Yen series, so a GIANT PILE OF YEN is always good news for me!

MICHELLE: Lately they’ve released several new action-ish series that I’ve found to be enjoyable, too. I look forward to volume three of Blood Lad, for example.

SEAN: Because the two bestsellers of last year were High School of the Dead and Alice in the Country of Hearts, the most obvious license ever would combine elements of the two in some way. This we have Are You Alice?, which seems to be about characters playing Wonderland ‘roles’ (like the other Alice), and murderous violence. I’m hoping this is more ‘psychological thriller’ and not ‘Saw’ with moe kids.

The 19th volume of Black God is out, and I believe that it is the final volume. It’s a manwha, so I will tag the others here.

MELINDA: I’ve been collecting this series all along, and I have a marathon planned now that the final volume is out. Look for more on this coming up!

SEAN: Blood Lad has proven to be my big surprise hit of 2013, so I’m really looking forward to the 3rd omnibus, whose cover is also very purple.

MELINDA: Oh, Blood Lad, how I adore you. I kinda can’t believe I’m saying that, but it’s obviously true.

SEAN: And speaking of survival horror, we have the 2nd volume of BTOOOM!. The first didn’t grab me hard, but I didn’t dislike it, so I will give it a second volume.

MELINDA: I had moderate fun with the first volume, so I’m looking forward to seeing where it goes.

And the second volume of Durarara!! Saika arc should be interesting as well, and feature a lot of slashing. 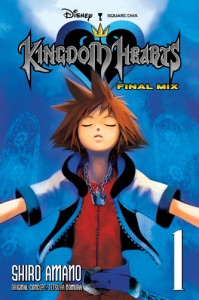 One of Yen’s stealth announcements was the rescue/relicensing of the Kingdom Hearts books, with two volumes titled Final Mix coming out this month. I never read the Tokyopop ones the first time around, but I really should check them out, if only for Donald and Goofy.

MELINDA: This will be my first experience with the series, too, but I’m ready to check it out.

SEAN: Omamori Himari has hit ten whole volumes, which makes it a shame I know next to nothing about it except it has ‘cat demon samurai girls’. (What, no vampires?)

Soul Eater 14 has one of the most minimal manga covers I’ve seen in a while. Love it. As for the plot, hope you’re enjoying Baba Yaga’s Castle, we’re still there.

Thermae Romae has its 2nd omnibus come out, which will no doubt continue to look gorgeous. I’m hoping the storyline can keep it up as well – things were getting dangerous when we left off for our bathing hero.

MELINDA: I’m certainly interested in seeing where the story goes. It’s difficult for me to imagine how it’s going to hold up over the long term, but it’s lovely to look at, and that’ll take me quite a ways.

SEAN: Lastly, Umineko: When They Cry (the ‘they’ in this case being Seagulls, not Cicadas) starts its second arc, which is where things really begin to get very, very meta, if I recall correctly. Plus you have to love that insane grin on the cover.

Anything that you’d risk exposing to Canadian Customs?