SEAN: This will be a shorter post than last week, partly as there’s less manga coming out, and partly as I’m out of my brain on the 5/15. 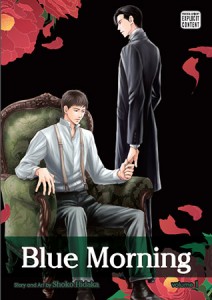 First of all, last week I forgot all about Dance in the Vampire Bund, which had Vol. 14 come out. I can only put that down to the fact that I just don’t read it. Does it have a Young Miss Holmes crossover yet?

A new series from SubLime, Viz’s BL imprint, Blue Morning features viscounts and butlers, and the summary sounds oddly like Black Butler with the fantasy removed and the BL actually consummated. Certainly the cover indicates this won’t be a laff riot.

SEAN: As for the cover for Bond of Dreams, Bond of Love 4, I regret to say it’s not quite as laughable as Vol. 3’s cover, though we do see a return of the ever popular GIANT SEME HANDS. Now there’s a post that needs to be done for BL Bookrack: Yaoi Misproportions I Have Known.

MELINDA: IT SHALL BE DONE.

SEAN: Reminding me they don’t just do artbooks these days, Udon has the first volume of Disgaea 3: School of Devils. I believe it’s based on a game of some sort.

The rest of our week is Viz. 07-GHOST reaches Vol. 4, and is looking angstier and bishier than ever.

MICHELLE: I’m looking forward to catching up with this series! 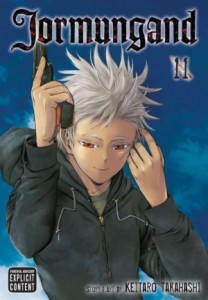 ANNA: I think most people should have one angsty bishie series in rotation. 07-Ghost is more than sufficient to fill out that category, and I’m happy to overlook the occasional lapses of coherence for the pretty art.

MELINDA: Ditto on all counts!

SEAN: We’re still not done re-releasing Takahashi’s Inu Yasha into big omnibuses, though the fact that this is Vol. 15 means we’re well over halfway there.

SEAN: Another seinen series bites the dust, as we have come to the 11th and final volume of Jormungand. Action-filled gun-running has never been so exhilarating, well, if you haven’t already read Black Lagoon. Now that the series is over, I should go back and catch up on it.

Lastly, Neon Genesis Evangelion releases its third omnibus, containing Vols. 7-9. Asuka’s on the cover, but if I recall correctly, it’s the arrival of someone else a little earlier than in the anime that causes the most fuss.

What manga makes you care more than you should?