May 2, 2013 by Sean Gaffney, Michelle Smith and Melinda Beasi 11 Comments

SEAN: This week gives us a variety of titles to choose from. Let’s delve right into them.

Midtown’s list said that they’re getting in Fantagraphics’ Wandering Son Vol. 4 right as Fantagraphics solicited 5 (for August) noting that 4 was running a bit late. I’ve no idea who is correct, but I’ll lean towards Midtown, as Fantagraphics tends to ship to comic shops long before Amazon and other related stores. It’s a must buy whenever it comes out.

MICHELLE: Yeah, it’s too bad releases of this one aren’t more reliable. I’ve fallen somewhat behind because of that.

MELINDA: I’ve had this volume on preorder for a very long time, so I’ll be very happy when it finally turns up. I’ll believe it when I actually see it, though.

SEAN: For those who enjoyed Negima from Kodansha Comics but felt that it would be even better if all the girls were 5 years old and Negi was their preschool teacher, well, Negiho! is the title for you! For the rest of us, I’m hoping it comes across as amusing and cute rather than, as I fear, creepy and vaguely illegal.

MELINDA: What she said. 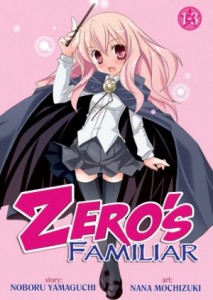 SEAN: Seven Seas has another huge omnibus, this one containing the first three volumes of Zero’s Familiar. All I know about this series is that the lead girl is worse than Shana, Taiga and Nagi combined, and there’s a lot of ‘comedic violence’. If you write ‘xxxxx gets a spine’ fics, then, this may be your kryptonite.

MICHELLE: See above re: ugh.

SEAN: Viz, naturally, has a giant pile of stuff. Bakuman is almost done, which means that he must be close to hooking up with that girl, right? At least that was the plot back when I was still reading Bakuman… In any case, Vol. 19 is filled with Jump goodness.

MICHELLE: At this point, I’m just stockpiling Bakuman until the final volume comes out, then I’m gonna marathon it. I think that might be fun.

MELINDA: I’ve been keeping up so my anticipation is high!

SEAN: I fear that I’m sounding cranky all of a sudden in these descriptions, and unfortunately Black Bird 16 will not change that. Man, it sells great, though. I like to think its sales help pay for all the poor-selling stuff I like.

MICHELLE: That’s a good way of looking at it.

MELINDA: If one must look at it.

SEAN: Bleach has its 5th omnibus, which is right in the middle of its strongest arc. Anyone who wonders why everyone is still paying attention to (and complaining about) such a slow-paced behemoth needs to check out these pacey, funny and heartwarming volumes.

MELINDA: You’re really making me want to go back and re-read Bleach!

SEAN: Claymore has gotten much praise from friends I trust, and I keep meaning to go back and grab it. Till then, here’s Vol. 22 for said friends.

MELINDA: I’m looking forward to this, too! I have a couple of volumes to catch up on, so I plan to read them all together.

SEAN: Dengeki Daisy has gotten much praise from me, and I can’t wait to see Vol. 12. This is the anti-Black Bird, being a shoujo thriller that respects its female characters and kicks eight kinds of ass. May I note that it and Black Bird run in the SAME DAMN MAGAZINE? Now that’s variety.

MICHELLE: I’m behind on this one, too, but intend to catch up in the coming weeks.

SEAN: How did Hunter x Hunter get to 30 volumes? Does that mean it’s also had 30 hiatuses? Still, its ability to return from long breaks over and over again must mean it’s a damn fine series, and so here we are, Vol. 30. 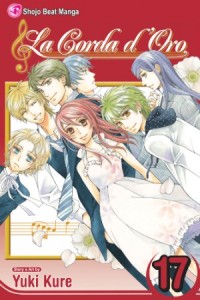 Ah, the final volume of La Corda D’oro! Sadly, it fell victim to “the sales suck, but we’re not allowed to cancel it, so let’s put it out as slow as possible instead.” A quiet, sometimes overly frustrating reverse harem about a girl and her violin, this LaLa series already has a sequel in Japan. Don’t expect that. Enjoy this, though.

MICHELLE: Someday I will read this. I own practically the whole thing.

MELINDA: I’ve enjoyed this series consistently, despite its flaws, so you can count me in here.

SEAN: Naruto also has Vol. 5 of its omnibuses releases, and I think it’s towards the end – at last – of the exam stories. This is also Naruto towards the height of its powers, I believe, so definitely recommended.

And we also get Naruto 61, which has Sasuke and Itachi’s tearful, loving reunion. D’aww…

Otomen 15 looks to focus on Tomomine, at least to start, and his being torn between what his parents want and his love of makeup. I am still basking in my love of Vol. 13, so as long as Ryo still appears once or twice, I’m fine with it.

Psyren has made it to 10 volumes, and I believe is at the point where he finally get some mysteries solved in addition to all the angst and action.

MICHELLE: Otomen and Psyren are two more I’m aiming to catch up with soon.

SEAN: Strobe Edge continues to try to work with its love polygon and make it realistic, keeping everyone sympathetic. Will that keep lasting with Vol. 4? Let’s find out…

MICHELLE: I hearts it.

SEAN: Tegami Bachi: Letter Bee delivers its 13th series of letters. Sorry, I got nothing on this series. Anyone want to chime in who reads it?

MICHELLE: I’m pretty behind on it. I like the world and the art, but sometimes the humor is very… shounen. 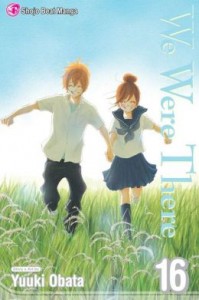 SEAN: Speaking of final volumes, We Were There has run out of manga, therefore I assume Vol. 16 must run out of ways to make everyone as sad as possible and comes up with a happy ending. Yay!

MELINDA: Agreed! I plan to talk about this shortly on the site.

SEAN: Lastly, not technically manga, but Yen Press has the first New Moon Graphic Novel, which will sell well enough to let them pick up some more series similar to Thermae Romae. I hope.

MICHELLE: Me, I’m hoping for manhwa.

MELINDA: I’m with Michelle. I’m also steeling myself to read New Moon. I’ve never been able to get up the gumption to read the novels, but these at least move quickly.

SEAN: So what titles give you feels this week? (Is this Tumblr?)