SEAN: After a relative deluge the last two weeks, it’s much quieter this week. So what have we got here?

I admit that I’ve never been able to get into Animal Land, the shonen series that Makoto Raiku started up when he left Shogakukan loudly and angrily and moved over to Kodansha. But then I was never into Zatch Bell either. That said, I know some people who really enjoy this series about humans, animals, and families. And it’s still going in Japan, so don’t expect Vol. 7 to be the last.

MICHELLE: I read volume one and wasn’t sure what to make of it. I liked some things, but the art was ugly and there was lots of pooping and in the end I could never convince myself to read a second volume.

SEAN: I had actually thought that Arisa ended with Volume 10, but it turns out that it has two more volumes after this. Presumably the manga has not finished its advanced course on psychological drama and twin switches. Not that I’m complaining, it’s good stuff, even if I’ve fallen way behind.

MICHELLE: I’m several volumes behind, too, but I’ve been really looking forward to catching up when volume ten comes out. 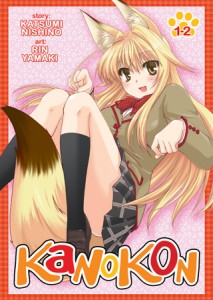 SEAN: Drawn and Quarterly have said that despite Amazon saying their Kitaro collection is out next week, this is not the case – May is the date being given. But if you want yokai, only about 20 times more moe, why not try Seven Seas’ Kanokon omnibus? It features a busty fox girl yokai, and is also a classic harem with meek male lead. I suspect the crossover audience between D&Q’s yokai title and Seven Seas’ is zero, myself. But these series do pretty well for the publisher, as we found out in this interview.

Vertical gives us two of the hotter new series out there. Flowers of Evil hits Vol. 5, and people are certainly talking about it now that it has an anime adaptation! Hey, all publicity is good publicity. Plus it’s still a riveting psychodrama, no matter what the characters look like.

MELINDA: I’m not a big anime person, but I’ve been quite a fan of this manga series, so I’ll always look forward to more.

SEAN: There’s also Vol. 2 of Knights of Sidonia, which Melinda just praised earlier today. I expect to see lots of space battles, lots of angst, and probably not a lot of humor. But hey, these sorts of series have surprised me before. Perhaps more bears?

MELINDA: Probably this goes without saying, given my post earlier, but YAY! I really can’t wait.

MICHELLE: I enjoyed volume one very much, and can’t wait for the second installment!

ANNA: I am looking forward to this as well!

SEAN: Speaking of series getting closer to their end, Bokurano: Ours must be running out of characters to kill off, as it only has 3 volumes to go after this. I admire the plot of the story and what the author is trying to say, but oh, so not for me.

MICHELLE: It *is* very depressing, but I still like Bokurano: Ours a lot. I think it’s the grim horribleness of the truth behind what’s happening that really hooks me.

SEAN: Dorohedoro, on the other hand, is not ending anytime soon, possibly to Viz’s chagrin. Still, I am pleased they’re still churning it out, as it remains my absolute favorite Ikki series, and it has the RIGHT kind of nihilism for me to get into (even if, yes, it also kills off a lot of its cast). 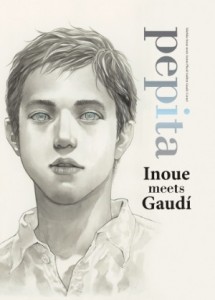 And it’s not manga, but it’s probably the most anticipated release of the week. Pepita: Takehiko Inoue Meets Gaudi is, in Viz’s own words, “Half travel memoir, half art book, all beauty.” Given the love folks have for Vagabond/Slam Dunk/Real, and the love many manga and non-manga fans have for Antoni Gaudi, this has all the hallmarks of a seriously impressive book. I hope to be amazed.

MELINDA: This is definitely my most-anticipated release for this week. I’m thrilled about the existence of a book like this in English, and I can’t wait to read it!

MICHELLE: I love architecture and I love Takehiko Inoue, so I don’t know how I could fail to love this book.

ANNA: This and Knights of Sidonia are honestly the only things I’m excited about this week. I plan to check it out!

SEAN: What are you buying this week? Also, doesn’t “God’s Architect” sound like the title of a Stephen Chow movie?