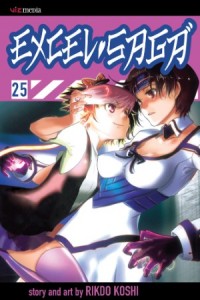 SEAN: Yes, that’s right, after catching up digitally this week, next week will see the debut of Excel Saga 25! Both digitally and in print! We’re close to the end, folks! There’s only two volumes to go after this one! With Excel go back to her body? Will Watanabe win Hyatt’s heart? Will Misaki be tsundere or simply have a nervous breakdown? Will Elgala continue to be Elgala? We’ll find out next week! Can you stand the excitement?

So, what are you buying this week?

SEAN: Hm? Did I forget something?

Speaking of series that have been going on seemingly forever, Oh My Goddess hits Volume 44. Forty-four! That’s as many as four elevens. And that’s fantastic. We’re still trawling through hell, meeting mini-boss after mini-boss, and this is still looking an awful lot like the series may wrap up after this arc. But we shall see.

As I noted in my Pick of the Week, some folks got their copies of DMP’s Unico a bit early. But it hits retail shops next week, and is a great Tezuka title for kids (in the same way that, say, Book of Human Insects isn’t). That’s not to say it doesn’t have sad or dramatic moments, but it’s definitely all-ages fun. And in full color!

MELINDA: I missed backing the Kickstarter for this, so I’m looking forward to picking it up.

SEAN: Kodansha is putting out Volume 3 of Missions of Love, a title I’ve enjoyed. I suspect the love triangle will get ramped up quite a bit, given the cliffhanger from last time…

MICHELLE: I read volumes 1-2 fairly recently, and it’s probably not a good sign that I utterly forgot the series even existed until just now.

SEAN: Seven Seas has the 7th volume of A Certain Scientific Railgun, one of my favorite titles of theirs. We just wrapped up a dramatic arc, and glancing at the cover, I expect that we’ll see a lot of cute comedy and quasi-romance here to make up for it. Should be fun. 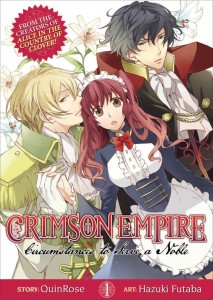 The other series is a debut, though fans of Alice in the Country of Hearts may find it awfully familiar, as it shares the same author and is based off a similar series of Otome Games. Crimson Empire 1: Circumstances to Serve a Noble may sound like it’s straight out of Harlequin with that title, but it features hot assassin maid bodyguard action!

ANNA: I am somewhat tempted by this, just because I enjoy the Alice franchise much more than I expected to. And I love romance stories with insanely long titles.

MICHELLE: Wow, the cover for Crimson Empire looks very much like a BL cover with a random girl on it.

SEAN: SubLime offers us Vol. 4 of Punch Up! Unfortunately, I can’t find cover art anywhere, so can’t do my usual schtick of talking about BL with the cover as my only guide. So, I got nothin’.

MELINDA: For what it’s worth, this title is a favorite of Michelle’s, so I’m inclined to give it a thumbs up, with or without a cover.

MICHELLE: Yeah, it has really grown on me.

SEAN: Viz has Case Closed 46, in which I’m pretty sure some sort of mystery will be solved, and Conan… um, Jimmy will still be trapped as a little kid. Call it a hunch.

Itsuwaribito got to Vol. 8 before I even realized it, and it’s still running in Japan. This apparently features the cast arriving on an island and a character named Kuroha, but is not a Princess Tutu crossover. At all.

Loveless has another omnibus, collecting Vols. 5-6. Apparently it’s even more angst-filled than the previous two omnibi. If that is realistically possible. 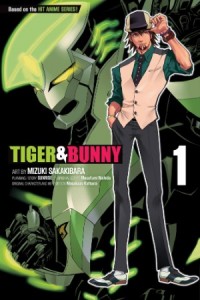 ANNA: I have the first omnibus of Loveless sitting on my shelves and keep meaning to get to it.

MELINDA: Given my post last week, it should come as no surprise to anyone that I’m eagerly anticipating this volume. This has been one of my most enjoyable recent discoveries. Tension is really ramping up, too, so this installment should be pretty intense.

SEAN: Lastly, there’s the debut of Tiger & Bunny, whose anime has been insanely popular over here, so it’s no surprise that Viz would license the manga, which comes out in Kadokawa’s Newtype A. I’m not entirely sure what the series is about myself, except “superheroes” and “this BL fandom is so large it’s not even funny”, so look forward to seeing exactly WHY it’s insanely popular.

MELINDA: Michelle and I will be reading this for our next installment of Off the Shelf, and I’m looking forward to digging in!

SEAN: Oh yes, Midtown strangely has the first volume of No Matter How You Look At It, It’s You Guys’ Fault I’m Not Popular! out next week, which is a bit of a stretch, given Yen announced it Saturday with an October street date. I expect that’s a glitch.

So, aside from the obvious (Excel Saga!), what are you getting this week?