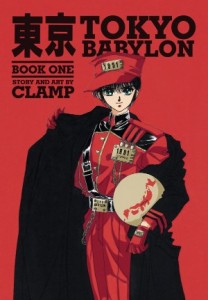 SEAN: Far be it from me to break with what I suspect is going to be unanimous. The clear pick this week is the first omnibus re-release of CLAMP’s Tokyo Babylon. I joked about it being the story of Hokuto and those two other guys, but it is certainly true that Hokuto is my favorite thing about it, and I’ll likely be digging into this volume especially for her. That said, the tragic story of Subaru and Seishirou is no slouch, and if I want to pretend things end happily I can just stop with this first volume anyway. This is one of the books that made CLAMP famous, and justifiably so.

MELINDA: I’m sure that by now it’s obvious I concur. Though there are at least two series I love just as much on this week’s list (Fullmetal Alchemist and Paradise Kiss) Dark Horse’s re-release of Tokyo Babylon is one of my most euphorically anticipated of the year, and there’s no way I can turn down the opportunity to try to bring more readers into the fold. I love everything about this series—its overblown comedy, its sometimes-clunky drama, and its eighties fashion sense—but mostly I love it for its slow-developing characterization and, well, its cruelty. CLAMP goes at this story with full force, and isn’t satisfied until they’ve beaten you into an hysterical, bloody heap. If you think I’m exaggerating, you haven’t read Tokyo Babylon. So go to it!

MICHELLE: I’m not gonna be the one to buck the trend! The best thing about the series being in print again is that readers who missed out the first time will be able to discover it. I hope we see some reviews from first-time readers in the near future!

ANNA: I think all of this peer pressure means I have to give this series a second chance.