SEAN: Ah, the first week of the month, the only week I never have to worry about things to talk about. And sure enough, there is a LOT coming out. Let’s discuss: 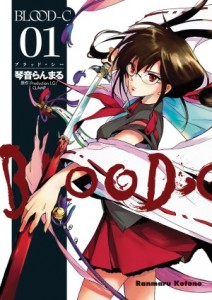 Dark Horse has two titles that aren’t Gantz or Evangelion, an achievement in itself. Including the debut of a new series, Blood-C. Which is yet another CLAMP franchise designed to promote an anime, made in conjunction with Production I.G. It’s a girl by day, monster slayer by night sort of story, and I believe gets quite dark. The artist did the Bandai manga version of The Girl Who Leapt Through Time.

ANNA: I feel like as a long-time CLAMP fan I should be more interested in this, but this is just reminding me that I need to get that 4th Cardcaptor Sakura omnibus.

MJ: I find I’m never really interested in these anime-related projects of theirs. But the new omnibus of Tokyo Babylon comes out soon, so I’ll be able to rave then.

SEAN: And for those who liked the Evangelion doujinshi anthology, there’s one coming out for Trigun called Multiple Bullets. Given Trigun has an actual creator,. this is a little more serious than the other types we’ve seen, and includes a 2-chapter story by Nightow he wrote for the movie premiere.

Kodansha has the 6th Negima omnibus. The translation had been fixed by this point, and it has no extra content, so it’s really just for anyone who didn’t get it the first time and is annoyed that it’s not available digitally yet.

Seven Seas may not be listed on Midtown, but my shop is getting in at least one of their titles (and, I conclude from incomplete data, the other one as well). Cheshire Cat Waltz has been sort of a middling Alice in the Country of ______ title, being neither as annoying as the Twins one nor as intriguing as the main narrative or the Joker series. But it’s decent enough, and Boris is one of the less insane people in it.

ANNA: I read the first volume of Cheshire Cat Waltz and wasn’t compelled to try other volumes, but I’m finding Joker much more interesting.

MICHELLE: I didn’t hate Cheshire, but Joker is definitely superior. I’d like to forget that I ever read the Twins one.

SEAN: There’s also Volume 2 of Mayo Chiki, for those who want it.

Vertical has the 3rd volume of Heroman, which is Stan Lee! How can you not like a Stan Lee! manga? (Best not answer that, la la la…)

MJ: I wish I could like this, for Vertical’s sake. But. Yeah.

SEAN: And, of course, there is a giant pile of Viz. Bakuman is still rumbling along towards its finish, and Vol. 18 will no doubt have lots of Jump drama, long stretches of dialogue, and annoying casual sexism.

MICHELLE: I’m really behind, but I’ll catch up one of these days! 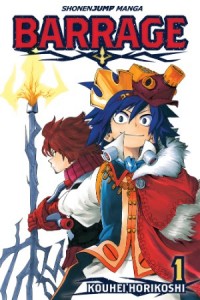 SEAN: Barrage is the first of Viz’s Shonen Jump Alpha premieres, where the Western World learns just what happens to 3/4 of all Jump manga every year – they go 2-3 volumes and then stop. And no, the popularity here has nothing to do with it. But given Viz is mostly avoiding longer Jump series right now, Barrage is a good short investment. It has the good old fashioned “posing as the prince” storyline, and is already half over!

ANNA: I’m reading this in preparation for a full review and am enjoying it a bunch. Actually I wish more shorter shonen series were released here, so I could get quick hits of shonen manga as opposed to committing to a very long series.

MJ: I’m really looking forward to this! Michelle and I will be covering it soon for Off the Shelf, and I’m feeling kinda eager.

MICHELLE: I wasn’t especially eager ’til I read Anna’s comment, but now I am! :)

SEAN: Ai Ore is over, but don’t worry, Mayu Shinjo’s series live on. I find my enjoyment of Shinjo depends on how much she humiliates her hero, so greatly enjoyed Vol. 1 of Demon Love Spell. Not sure how long that will last with Vol. 2…

MJ: I did too! Shockingly so!

MICHELLE: I liked it okay. Didn’t I read somewhere that Ai Ore! is not considered officially over, though? If it really is, I might have to do a cartwheel.

I honestly keep forgetting that Fushigi Yuugi: Genbu Kaiden is still running, given that its author is famous enough that her publishing schedule for it is “whenever”. But hey, here’s a new volume.

ANNA: For me, new volumes of Genbu Kaiden are always an excuse for a celebration. I love this series.

MJ: I completely agree, Anna. This series is such a treat anytime it turns up.

MICHELLE: Forsooth. Genbu Kaiden is great, but I feel bad that every time I read it or talk about it I always want to add “I hope she writes Byakko Kaiden next!”

SEAN: One Piece is almost at the 2/3 mark in its quest for 100 volumes! And best of all, Vol. 66 finally wraps up Fishman Island and starts a new arc! Halle-freaking-llujah! Of course, even the poor One Piece arcs are miles better than most shonen.

MICHELLE: I fell behind on One Piece, too, but am determined to get caught up and do a brief of volume 66 in the near future. 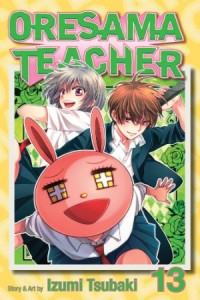 SEAN: Oresama Teacher remains one of my favorite comedies that Viz is putting out, and Vol. 13 features everyone’s favorite superhero, SUPER BUN, on the cover. What more could one ask for?

ANNA: Indeed. I only hope there are some pigeon note-passing antics in this volume as well.

MICHELLE: Pigeon note-passing antics?! Did this occur recently? I haven’t read volume twelve yet… did I miss cute pigeon-y goodness?

SEAN: There is Pokemon Adventures Vol. 15, apparently a 2nd edition of same. I don’t follow Pokemon at all, but know that it brings in piles of cash. In my headcanon, this and Yu-Gi-Oh are paying for the end of Excel Saga.

Psyren starts its second half with Vol. 9, which features more battles, more teamwork, more psionic powers… in other words, a lot more Jump. Not sure anyone’s head will explode, though. “Nooooooo!” BOOOOOM! (See, Even A Monkey Can Draw Manga’s influence is still felt today…)

MICHELLE: Here’s another shounen series I like that I’ve fallen behind on. (That makes three this column!) There just aren’t enough hours in the day to read everything I’d like to read.

SEAN: Rosario + Vampire Season II hits Vol. 11, which must be very confusing if you mix up the Arabic and roman numerals…

Skip Beat’s 3-in-1s return by popular demand! Vol. 4 has the original 10-12, which if I recall is right in the middle of the Dark Moon shoot.

SEAN: Strobe Edge has a 3rd volume. Having introduced the rival girl, and then done a side story that really showed she’s not a villain at all, I’m interested to see where the series takes this.

ANNA: This seems like a nice conventional shojo series. Nothing wrong with that at all.

MJ: I’m a lot more interested in this series than I thought I would be when I started it, so this is a happy thing.

MICHELLE: I like it quite a lot. It might be taking a conventional route, but it’s not being lazy about it, which I appreciate.

SEAN: And Vampire Knight has Vol. 16. The series was just announced as coming to a close, so I assume there’s only one or two volumes left to go. In any case, I plan to be riveted yet hopelessly confused, as always when I read Vampire Knight.

MICHELLE: Oh, I hadn’t heard that news! Perhaps I’ll just hold on for the final volumes to come out here and then read it all in a chunk; probably things will make a lot more sense that way. Maybe.

SEAN: That’s a lot of manga. What are you getting?