SEAN: It’s a quiet week at Midtown, which to my surprise still doesn’t have the Yen Press titles that I got this week and, um, apparently no one else did. This does not mean that nothing is being released there, however. 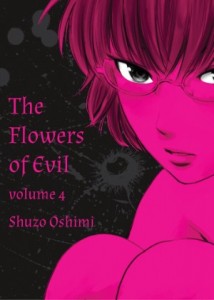 Vertical has the 4th volume of Flowers of Evil, aka Baudelaire for Shonen Manga. The covers have turned black and so has the story, with its three protagonists going to darker and darker places. Who’s for joining them?

MELINDA: *raises hand* Out of everything on this short list, Flowers of Evil is really the only thing that interests me.

MICHELLE: I keep saying that I’m not sure I’m going to continue with this series, but then I keep continuing with it.

SEAN: And Viz has its Signature Series, which makes this Blogger Love week. Afterschool Charisma has hit Vol. 7. I must admit I’ve lost track of it, but, um… clones!

ANNA: Oh, Afterschool Charisma! I really enjoyed the first three volumes or so. I should get caught up.

MICHELLE: I intend to get caught up soon, too. Maybe I can even manage to talk about the series on Off the Shelf, finally!

SEAN: There’s the penultimate volume of Jormungand, which is filled with action, gunplay, awesome moments and likely a huge pile of grey and grey morality amongst its cast.

MELINDA: I am ashamed to say that I don’t read either of these. Um. 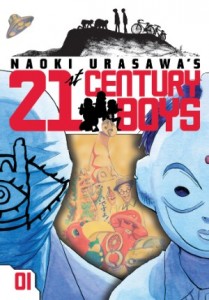 ANNA: I loved 20th Century Boys but just fell way behind on that series. One of these days…..

MICHELLE: I literally laughed out loud at your Marc Bolan reference, Sean! I’m a fairly serious Bolan/T. Rex fangirl, so was filled with glee when the opening pages of the manga feature the protagonist playing “20th Century Boy” over the morning announcements.

Anyway, I too fell way behind but it was kind of on purpose. I did the same with Urasawa’s Monster, reading the first couple volumes and then just waiting until all the rest of it was out before indulging in a huge marathon. Soon, I’ll do the same with this series.

SEAN: Any picks from you folks? Aaron, if you pick Gunslinger Girl for a 3rd straight week, I’m sending you to the corner…