SEAN: For once, all the manga that was supposed to arrive this week actually did, meaning that next week is quieter than usual, as I’m not shuffling titles that should have come out already around. Let’s hope this trend continues in 2013!

Dark Horse has Vol. 2 of OreImo. Of all the moe faux-incest manga that was published in 2012, it was among the best. Which is possibly the worst compliment ever, but there you go.

MICHELLE: I hate to start the year off with an “ugh,” but… ugh. 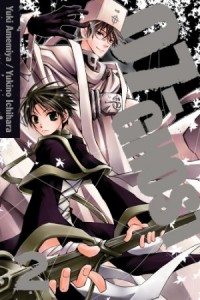 SEAN: Viz takes up the remaining slots. 07-Ghost receives a new Vol. 2 (an older Vol. 2 came out years ago from publishers now defunct). It’s hard to make amusing comments about this title, so I hope that the series gets to Vol. 7 so that I can at least go with the numerology gag.

MICHELLE: Despite being confusing at times, I found the debut volume of 07-Ghost to be fairly intriguing, so I’m glad that VIZ opted to rescue this title. I’ll definitely be checking out volume two.

MELINDA: Yeah, I’m genuinely looking forward to this volume! I quite liked Volume One.

SEAN: Case Closed, meanwhile, has hit Volume 45. It has a few more volumes to go before it can pass Inu-Yasha as the longest running North American Shonen Sunday series. I hope that it makes it. (I also hope for an omnibus edition that restores the original names, but I suspect I can whistle for that.)

MICHELLE: I have generally benevolent feelings towards Case Closed, but they’re not sufficient to compel me to personally collect and house a series so notoriously long. I rely on my local library to do that instead. But it is a pretty fun series, if formulaic.

Tangent: I can’t whistle. I’m very bitter about that.

SEAN: Lastly, how do you want your Loveless? There’s the 2nd omnibus, which will no doubt deepen all the mysteries and sexual tension. And there’s Vol. 10, where everything has already exploded messily and you get to see the pieces fly apart in amusing ways. What about it, readers? Slow or fast?

MICHELLE: I never did read Loveless the first time around, so while I’m happy to see those later volumes coming in, I’m still back in the 2-in-1 territory. I really enjoyed the first omnibus, and am looking forward to continuing.

MELINDA: I admit I’m pretty psyched about this release. I really enjoyed the first omnibus and I kinda can’t wait for more!

SEAN: Does anything catch your eye next week?