SEAN: The final week of 2012 gives us some interesting stuff from JManga: 2 recurring volumes, and three new ones I know almost nothing about!

tactics Vol. 11 was postponed from a few weeks back, and is filled with supernatural shenanigans. Nice to see JManga rescue this from Tokyopop.

MELINDA: I’m definitely thinking about giving this series another chance. I read its early volumes so long ago, I can’t even remember what I didn’t like about them anymore. Time to check in on it again!

SEAN: Morita-san Wa Mukuchi is one of those underrated titles that I always forget to read but when I do, never fails to bring a smile to my face. Even if I’m the polar opposite of its quiet heroine.

Drops is the first new manga here, and appears to be done in one volume. It’s an Ohta Shuppan Manga Erotics F title, always a good sign. The author, Yuiji Aniya, seems to mostly be known for her BL – DMP licensed her Men of Tattoos manga, and Digital Manga Guild picked up Mister Convenience. I don’t think this is BL, but I have no other info.

MICHELLE: I really, really loved Men of Tattoos. In fact, I named it one of my favorite BL reads of 2012! The cover of Drops suggests something more comedic, but I’m still quite excited about it!

MELINDA: It’s definitely Michelle’s enthusiasm about Men of Tattoos that has me anticipating something good here. I look forward to finding out! 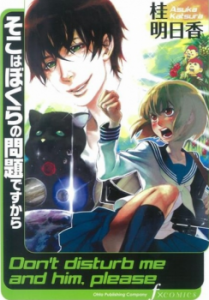 SEAN: Don’t Disturb Me and Him, Please will either be fantastic or horrible, and I’m not sure which. The artist is well known here, having done Blood+ (Dark Horse)and Le Portrait de Petit Cossette (Tokyopop), and this is also Manga Erotics F (and also complete in one volume). The premise, though, is described as being about a girl who is horribly attracted to horrible perverts, and ends up caring for a lolicon. It’s described as comedic. Well, I certainly *hope* so. I’m hoping it’s wildly over the top – the cover seems to indicate it will be.

MICHELLE: Hm. I’ll wait and see on this one.

MELINDA: Er. Um. Hm. I’m not a big fan of Blood+, but I guess we’ll see? It definitely sounds interesting…

SEAN: Lastly, Rensuke Oshikiri gives us Pico Pico Boy, which seems to be slice-of-life seinen. It’s also Ohta Shuppan, but ran in a couple of their far tinier magazines, so I have even less info! The artist specializes in horror, but this… isn’t that, as far as I can tell.

MICHELLE: Yeah, we haven’t much to go on with this one. But it’s definitely part of JManga’s charm that they bring out these unknown titles. I mean, at least some of them have to be hidden gems, right?!

SEAN: Indeed. Lots of surprises coming up next week.