SEAN: Things are pretty quiet the day after Christmas. Even Diamond Comics is taking the week off, with the exception of a few books from its elite, non-manga publishers. That said, Midtown Comics has a few things that Diamond already sent out that are coming in from their other suppliers, so let’s catch up.

Cage of Eden 8 continues to be action-packed, thrilling, revelatory, and absolutely drenched in fanservice. It’s a title I enjoy reading but can’t recommend to anyone unless they’re used to large breasts everywhere. That said, it is refreshing seeing a shonen title doing well over here that really is for 10-12 year old boys, as opposed to Jump’s more balanced gender readership.

MICHELLE: I have some small interest in this title because of its plot but, yeah, boobs deter me.

MELINDA: I suppose that, being a manga fan, I’m *used* to large breasts everywhere, but I admit it gets wearying after a while. I wouldn’t say they deter me, exactly, but they do tend to push me into “critical” mode right out of the gate. 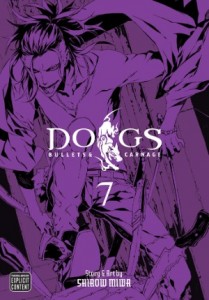 SEAN: Viz has a new volume of Dogs: Bullets and Carnage, the first in a year. (Either it’s caught up to Japan or sales are meh. I suspect the former.) This is also filled with action, thrills, and revelations, and is absolutely drenched in fanservice… for female readers. I don’t think I’ve read a single non-BL Dogs fanfic on the internet. (Note: Dogs has no actual BL.) I need to catch up with this, but it’s recommended in a dystopian sort of way.

MICHELLE: I have just started reading Dogs with an eye to featuring this latest volume in an upcoming Off the Shelf. “Dystopian” really is an apt way to describe it, and since I usually like those sorts of stories, I am kind of liking this one too, even if violence is trumping characterization at the moment. I’m just in volume one, though, so this could obviously change.

MELINDA: Is it wrong that I find myself more interested in looking up the fanfic than I am in the series itself? I’ve always been kinda so-so on this series, and I suspect some BL might help.

SEAN: And Neon Genesis Evangelion 13 may have come out last month everywhere else, but this means little to Midtown, who are seeing it arrive a bit late. It’s worth the wait, as I noted in my review. And may finally end with Vol. 14, sometime before we all die. Or the artist does.

MICHELLE: Y’know, I have never actually seen Evangelion (aside from the first couple of episodes), nor have I read any of the manga. Possibly this is a serious oversight in need of correction.

MELINDA: I’m a fan of the anime, but I never got very far with the manga adaptation. Sean’s review has me feeling rather curious, however.

SEAN: What are you spicing up your Boxing Day with?