MICHELLE: Hey, Melinda! What game would you play with a wombat?

MELINDA: Well, wow, I don’t know! What game would you play with a wombat?

MELINDA: Heh. Okay, it actually took a moment for me to get that. I must need more coffee!

MICHELLE: Maybe so! While you’re getting caffeinated, wanna tell us about some manga you read this week? 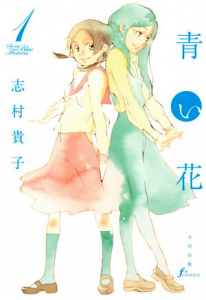 MELINDA: Sure! Those who took in my new video feature this week, My Week in Manga, may be anticipating this as my first topic for today—I’m talking about Sweet Blue Flowers (Aoi Hana) by Takako Shimura. The first volume is now available at JManga, and I could not be more thrilled. I’ve been waiting to read this series for a long time, and I’m so happy that it’s finally available in English.

Sweet Blue Flowers has two protagonists—Akira Okudaira, a young woman just beginning her first year at an elite all-girls high school, and Fumi Manjoume, Akira’s childhood friend who has just moved back into the area after ten years (though she’s attending a different all-girls school). Fumi is a lesbian, and shortly after we meet her, she discovers that her older cousin, Chizu, with whom she’s been having a sexual relationship for some time, has become engaged to be married. Heartbroken, Fumi turns to Akira for comfort, cementing their renewed friendship. Akira is relatively innocent about matters of the heart, but when Fumi begins dating an upperclassman, Yasuko, she finds Akira to be a supportive confidante—the first she’s ever really had. Meanwhile, Akira’s classmate, Kyouko, who has a long-time crush on Yasuko, tries to pawn off her arranged fiance on Akira.

Like Shimura’s earlier series, Wandering Son, Sweet Blue Flowers is a quiet, emotionally complex story that addresses its characters’ sexuality, burgeoning sense of self, and considerable teen angst with thoughtfulness and real gravity, while also carefully providing them with a support system that keeps their sense of fear and isolation from overtaking the narrative. Manga fans who long for teen-oriented series’ depicting fantastic female friendships will find everything they’re looking for in this series, along with so much more.

Though the initial onslaught of new characters inhabiting two different girls’ schools can be a bit overwhelming, the story soon settles in on its primary relationships and how these schools’ social circles intertwine. This aspect of the story mainly revolves around Yasuko, who transferred from Akira’s school to Fumi’s, and whose romantic history looks to be far more complicated than she lets on. The series’ exploration of these girls’ romantic fantasies and inner lives should ring true to any adult woman still in touch with her teenaged self, and this is really its greatest strength. Sweet Blue Flowers doesn’t romanticize first love, but it does let us in to its characters‘ romantic hearts, with a level of authenticity that’s less common than one might expect, especially in stories about young girls.

I admit, I’d love to see a high-end print version of this series similar to Wandering Son‘s, especially as the visual quality of JManga’s edition makes text sometimes difficult to read, but overall I’m just grateful to be able to read it at all. This is really a treasure.

MICHELLE: I’ve really wanted to read this series for a long time, so I too am really grateful that it’s available in English at last! JManga has released a fair amount of yuri in the past year, but this does seem to be the most “emotionally complex” one yet. And probably utterly devoid of fanservice.

MELINDA: Yes, it’s completely fanservice-free, which is a bigger relief than I even expected it to be. I’m so accustomed to just wading through fanservice, I sometimes forget how relaxing it is to read without it.

MICHELLE: I’ve spent the interval since our last column getting caught up on Yumi Unita’s josei series Bunny Drop. 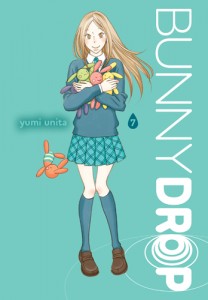 Let me state right up front that I was spoiled on the ending of this series before I even began reading it, and have found that this advanced knowledge has colored my reading to the extent that I really can’t avoid talking about it. So, if you don’t want to be spoiled on the ending of Bunny Drop, you should probably skip down to where we start talking about Thermae Romae.

After four volumes depicting single guy Daikichi Kawachi’s experience raising his six-year-old aunt, Rin, Bunny Drop skipped ahead ten years for its fifth volume. Since then, it’s focused more on Rin as a teenager, her disappointment with childhood friend/love interest Kouki, and her uncertainty over her future. Before I get into my complaints, I want to note that Rin’s truly an interesting character. Serious, studious, responsible, domestic, and reserved, it’s refreshing to read about someone who’s simultaneously classy and occasionally prickly. In this volume, her observations of the bonds shared by friends and their mothers causes her to contemplate the nature of motherhood and to ultimately seek out her own. She does eventually meet Masako—another unique character who’s prickly, defensive, and yet somehow sympathetic—but the volume ends with her concluding that living with Daikichi is best.

All of this sounds perfectly innocent without the foreknowledge that Rin and Daikichi are going to end up as a couple. But because I know that, I have seen Unita urging the story in that direction ever since the fifth volume. I might’ve found Rin’s reaction to Kouki’s astoundingly poor decision-making more poignant, had I not been cynically observing, “Had to cross him off the list.” I had the same reaction when Daikichi and Kouki’s mother eventually decide not to get together. Because this seventh volume is mostly concerned with Rin and Masako meeting, there’s less of that, but it’s still present in the form of an awkward sniff-test that I guess is supposed to confirm that Daikichi is not too close a relation to be genetically viable and Rin’s realization that she doesn’t want anyone else to take care of Daikichi in his old age. This, coupled with scenes in which Daikichi confirms that she’ll always be his kid, just makes everything kind of… confusing and icky.

Now, don’t get me wrong. Bunny Drop is still a good read, and I am trying to keep an open mind that Unita will somehow manage to bring these two together romantically in a way that won’t make my skin crawl. (I pray that we get another ten-year time jump first!) But I can’t deny that I wish it had remained in its quasi-Yotsuba?! state indefinitely.

MELINDA: I admit I’m not feeling the “icky” as much as you are, and perhaps that’s because I was spoiled much later, after I already had the chance to fall in love with the characters and the story in general. Also, I just may not be as squicked by the concept in general. But I agree that the story has been nudging Rin in this direction since the time-jump, and knowing the ending in advance has certainly affected the way I view both Rin and Daikichi’s romantic lives. More and more, though, I’m feeling confident that Unita will be able to pull this off in a way that’s moving and sweet instead of gross. I hope I’m right?

MICHELLE: I really hope so, too.

Anyway, you want to do the honors and introduce Thermae Romae? 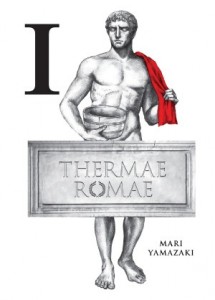 MELINDA: Sure! So, as we’ve mentioned, our mutual read this week is the first volume of Mari Yamazaki’s Thermae Romae, published in true hardcover glory by Yen Press. It’s an award-winning manga in Japan that’s spawned both an anime series and a popular live-action film, and it’s been ongoing in Enterbrain’s seinen magazine Comic Beam since 2008.

Lucius Modestus is an architect in ancient Rome, whose old-style bathhouse designs are falling out of favor. A true devotee of the public bath, Lucius goes for a soak to clear his thoughts after losing an important contract. As he sinks deeper into the bath, he is suddenly sucked into a drainage pipe, only to find himself finally emerging in modern-day Japan! Thrilled by the “flat-faces”‘ (as he calls them) advances in public bathing, he returns to his own time full of new ideas, which become all the rage in Rome, establishing him as an architectural genius.

Each new chapter roughly repeats this formula (Lucius hits a snag in his own design, time-travels to Japan, and returns with the plan for Rome’s next great bath), which I admit I found a bit wearying over time, though I certainly learned a lot about baths!

MICHELLE: More than anything, Thermae Romae actually reminds me of Ekiben Hitoritabi (available from JManga), which is the likewise repetitious story of a train/bento enthusiast who travels around Japan, marveling at both trains and bento and finding nothing in his travels to dislike. Similarly, each time Lucius comes to Japan he finds it wondrous and deserving of enthusiastic mental praise. At one point, during the chapter in which he discovers onsen, the hard-boiled eggs cooked in the hot water, and the sake served along with them, he utters a line of dialogue that could’ve been completely lifted from Ekiben: “Fantastic! It goes perfectly with the egg!”

So, basically, Thermae Romae is to baths what Ekiben Hitoritabi is to trains and bento lunches. It’s a celebration of a unique aspect of Japanese culture that is a little bemusing perhaps for Westerners to read, but still entertaining.

This makes me wonder… why did Thermae Romae get a deluxe hardcover release while Ekiben is only available digitally? Certainly the time-travel aspect offers a modicum of intrigue, but I think the main difference might rest in Yamazaki’s art style. The volume’s large size and glossy pages, coupled with Yamazaki’s realistic renderings (of Lucius in particular), contribute to the impression that this is actually a Western graphic novel of distinguished literary merit! Yen must be hoping to attract a wider audience with this release than simply manga fans.

MELINDA: I think you may have a very good point. For what’s essentially an episodic gag manga, the artwork is really quite gorgeous, particularly in its depictions of ancient Rome. It’s a strange and awesome combination, really, when you consider that there’s an entire section regarding toilets (down to the details of Roman wiping), depicted with this really lovely, rather sensitive artwork instead of crude, gross-out drawings or clinical, non-fiction diagrams—either of which would be more likely to accompany the subject matter. Yen’s high-end treatment emphasizes the erudite nature of the series, which isn’t at all inappropriate, but I’ll be interested to see who its audience really is.

MICHELLE: Speaking of the gag aspect… until I got to the part about the toilets, I was feeling kind of dubious about the front flap’s claim that Thermae Romae is a “historical comedy.” However, Lucius accusing the bidet of being an “insolent knave!!” changed my mind.

MELINDA: Heh, yes, the toilet section did provide some of the best humor, I have to admit!