SEAN: After the hugeness of this week’s list, next week is looking a lot milder. Though as always, Midtown, Diamond, and bookstores don’t seem to match at all. (My shop got most of the Viz stuff, but none of the Yen releases, which they say are coming out 12/12.) This list is mostly Midtown, with two Viz titles most stores will get 12/12, and one Yen title with the same circumstances. (Midtown gets Yen’s hardcovers later than most?)

Yes, yes, I will stop being a nerd and get on with the list. Kodansha brings us a few new titles. Attack on Titan 3 looks to answer what’s going on with that Ally Titan and why Eren is back, but I suspect I still won’t be able to tell half the soldiers apart from the other half. Come on, at least give them a distinctive scar or something!

MELINDA: Ack! I’m a whole volume behind in Attack on Titan, and that’s about to grow into two volumes. I need to catch up! 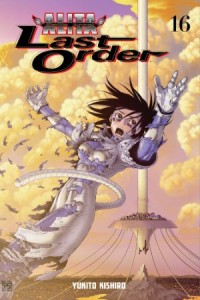 SEAN: Battle Angel Alita: Last Order returns after a very long hiatus and with a new publisher. Kodansha Comics picks up the reins after the author switched Japanese publishers in what was, for Japan, a very loud parting of the ways. Vol. 16 picks up where Viz left off, but for those who need to start from the beginning, omnibuses are coming soon. (Of Last Order, that is. The original is still out of print and likely to remain so.)

The Wallflower is up to Volume 29, and at times I feel I’m the only one still reading it, mainly as I don’t give a rat’s ass when Sunako and Kyohei admit their feelings, I just want to see them kicking people who annoy them in the face. I should get more of that here.

MICHELLE: Three series so far that I haven’t read! I did own the first half dozen volumes of The Wallflower for a time, but I must’ve gotten wind of its terminal lack of resolution, because I quit buying it and eventually gave away the ones I did have.

SEAN: I have no earthly idea what Captain Commando is. It’s by Japanese artists, apparently, but I can’t find out who originally published it. Given Udon is putting it out, is it a Capcom thing, maybe? Anyway, this is Volume 2.

MELINDA: I suspect this isn’t even remotely for me, yet I feel compelled to read something called “Captain Commando.” I mean. Yeah.

SEAN: Viz somehow missed sending Nura: Rise of the Yokai Clan 12 to shops this week, but it’ll be there next week. I like Nura, which always entertains me without wowing me. It’s a meat-and-potatoes Jump series, much like Psyren.

MICHELLE: I am way, way behind on Nura, but I don’t dislike it or anything. I guess it’s easy to put on the backburner.

SEAN: Depends, do you enjoy generic Jump? Lots of multi-volume fights, a few love triangles, people getting stronger through training and the power of friendship…

Everyone except Midtown will also be getting the 7th volume of Itsuwaribito. I admit I never really followed this series, about a boy trying to redeem the world with his lies. But it’s one of Viz’s few remaining Shonen Sunday series, and I cherish each of those like my own kin. So go get it.

MELINDA: “I cherish each of those like my own kin.” I have nothing profound to say about Itsuwaribito, I just liked that sentiment. Actually makes me want to read every Shonen Sunday series I can find. 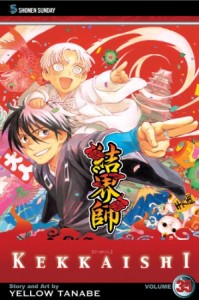 SEAN: Speaking of which, it’s the final volume of Kekkaishi! This is definitely on my list of series to catch up with, and it makes me sad that it’s ending here. But I hear the ending is quite satisfying, so definitely grab grab grab this.

MICHELLE: I have been carefully hoarding Kekkaishi for years and am looking forward to indulging in a marathon. Possibly over Christmas break!

MELINDA: I have never delved into this series, but I really do want to. Maybe I’ll catch up digitally!

SEAN: Lastly, for some reason not featured with the giant pile of Yen last week, Kaoru Mori’s collection of short stories Anything and Something is due out as well. There’s apparently some commentary and designs for Emma and A Bride’s Story interspersed throughout. I’m not as wild about Mori as some other bloggers I know, but this is still definitely a book to have.

MICHELLE: I haven’t read as much Mori as I should have, but this one looks pretty quirky and fun.

MELINDA: I’d really, really like to see this, so I can’t wait to get my hands on a copy.

SEAN: Sticking your thumb into any of these hoping for a plum?