SEAN: Nothing that makes me go squee in next week’s 4 new titles, but some interesting stuff regardless.

Takatoh-sanchi no Komatta Jijyou is another Be x Boy title from Libre Shuppan, with a smug square-jawed seme feeding his startled uke some pancakes. It’s designed for audiences who like that sort of thing, I imagine.

MELINDA: I tend to roll my eyes at covers like this, but I’ve also learned over the years that I can’t really judge a BL manga by its cover. I haven’t read any of Natsuho Shino’s other books, though a few of them have been released by both DMP and SuBLime. I have to admit that her (apparently unfinished) series Oh My God! (SuBLime) has one of those omyouji plotlines that tend to be kinda bullet-proof for me, even when they’re awful. Maybe I’ll check that one out first before braving the pancake cover.

MICHELLE: I haven’t read any of her stuff, either, though I must point out that back in the day, Kate kind of liked Oh My God!

SEAN: A Transparent Orange in the Lip, from Ichijinsha’s Yuri Hime magazine, is exactly the same, only for yuri audiences rather than BL. Look, vulnerable high school girls in love! (Why am I getting Kentucky Fried Movie flashbacks?)

MELINDA: Erica Friedman reviewed this title a couple of years ago, and… well, it’s not all that encouraging. Sadly. 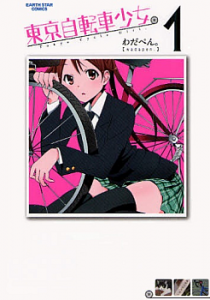 SEAN: Our final two titles are both from Earth Star Entertainment, a company that has clearly made a big deal with JManga recently, as we’re seeing a huge pile of their stuff. They have a couple of magazines, and tend to have titles that run across multiple platforms, with anime, CD dramas, etc. Tokyo Cycle Girl is yuri-ish (in the same way that Zero-Sum titles are BL-ish) about a girl who tries to impress her new aloof roommate by upgrading her bike.

MELINDA: So does it follow then, that if I like Zero-Sum titles, I’d also like this? :D I’m hoping so, because I kinda love the premise. I hope it works out for the girl!

MICHELLE: It definitely sounds more promising than A Transparent Orange! And huzzah for more yuri and yuri-ish releases!

SEAN: You may notice that Koetama has 5 creators listed. It’s a project that was “conceptualized” by four voice actresses, who created characters based on what they would likely be cast as. Naturally, it’s a manga about aspiring voice actors. For seiyuu buffs, the creators are Nakahara Mai, Ueda Kana, Hayami Saori and Yahagi Sayuri. Intriguing, even if it looks very calculated.

MELINDA: This idea, while interesting, is kind of artistically suspect, though I suppose I should give it a chance.

MICHELLE: Yeah, I dunno. The cover says “not for you” in its art style, even while the girl herself is pretty cute-looking. I think I’ll wait for others’ reviews before I forge ahead.